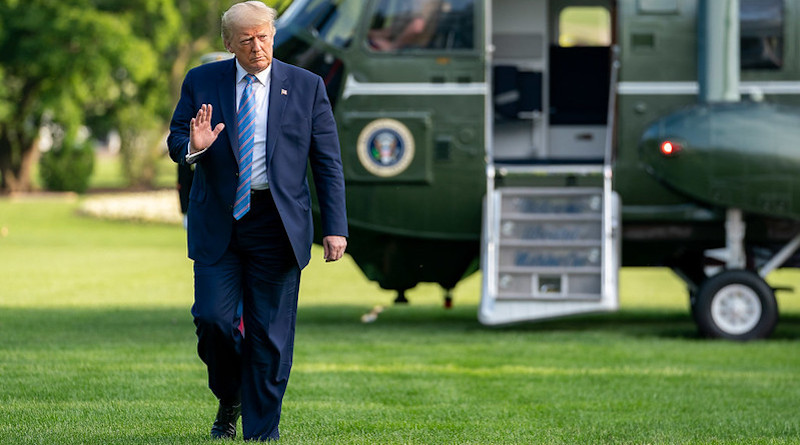 U.S. President Donald Trump is dismissing intelligence reports suggesting Russia may have offered a bounty to Taliban-linked militants for attacks on U.S. forces after top aides said he was fully briefed on the matter.

In a series of early morning tweets Wednesday, the president called media reports about the intelligence “just another HOAX!” and said the source for the original report in The New York Times “probably does not even exist.”

Trump also cited a statement from the Pentagon that military officials have “no corroborating evidence.”

“Do people still not understand that this is all a made up Fake News Media Hoax started to slander me & the Republican Party” the president wrote on Twitter. “I was never briefed because any info that they may have had did not rise to that level.”

White House officials initially said that Trump had not been verbally briefed on the intelligence because of an inability to confirm its accuracy.

“The person who decided early on whether the president should be briefed on this in the Oval, in the Oval intelligence briefing, was a senior career civil servant,” he told reporters. “And she made that decision because she didn’t have confidence in the intelligence that came out.”

However, media outlets, including The New York Times and CNN, reported some of the information on the alleged Russian plot had been included in the Presidential Daily Brief, a daily summary of the top intelligence issues, in late February. Other reports suggest Trump was given written information about the matter in 2019.

The Times has also reported, citing three officials familiar with the intelligence, that some of the intelligence about the alleged bounty plot is based on intercepted data that shows large financial transactions from an account controlled by the Russian military intelligence agency to an account linked to the Taliban.

Democratic lawmakers Wednesday continued to express dissatisfaction and frustration with the White House’s handling of the intelligence, some going as far as to call the president’s behavior treasonous.

““If this does not count as treason, I don’t know what does,” Democratic Rep. Seth Moulton said during a call with reporters Wednesday. “If the most junior officer in the United States military ignores an intelligence report delivered to him or her, as we know this intelligence report was delivered to the commander-in-chief, then that junior officer would absolutely be in prison.”

“This is undebatable dereliction of duty,” he added.

Also Wednesday, the top Democrat on the Senate Foreign Relations Committee, Robert Menendez, called for sanctions on top Russian officials if they are found to have been involved in the alleged bounty program.

“Congress must again step up and defend our people and institutions from Kremlin aggression,” Menendez said in a statement, suggesting a sanctions requirement be included as part of the annual defense spending bill.

But Trump administration officials pushed back, accusing Democrats and the media of politicizing the reports.

“I don’t want to comment on the intelligence,” Secretary of State Mike Pompeo told reporters. “But I can tell you the Intelligence Community handled this incredibly well.”

“The fact that the Russians are engaged in Afghanistan in a way that’s adverse to the United States is nothing new,” he added. “The Russians have been selling small arms that have put Americans at risk there for 10 years.  We have objected to it.”

The report, though, made no mention of the alleged Russian bounties. And top Republican lawmakers continue to defend the White House’s handling of the initial intelligence reports.

“There’s some confusion as far as our own intelligence, and it just didn’t rise to the level of the president at that time,” Sen. Jim Inhofe, the Republican chair of the Senate Armed Services Committee, said in comments on the Senate floor Tuesday. “Our intelligence agencies aren’t in complete agreement on this, even now.”

Despite the lack of agreement on the intelligence about the alleged Russian plot to pay Taliban-linked fighters to attack and kill U.S. and coalition forces in Afghanistan, U.S. officials insist the threat was not taken lightly, and that precautions were put in place.

Officials have also said the intelligence was shared across the U.S. intelligence community and with allies whose troops were potentially at risk.

On Tuesday, the White House blamed intelligence officials who leaked information about the alleged bounty program in Afghanistan for potentially blowing almost any chance of coming to a consensus on whether the threat was real.

Press Secretary Kayleigh McEnany criticized “rogue intelligence officers” for putting the lives of U.S. troops in danger, saying the leaks, and the attention being given to the unproven allegations, is weakening the country.

“This level of controversy and discord plays directly into the hands of Russia, and unfortunately, serves their interests,” she added.