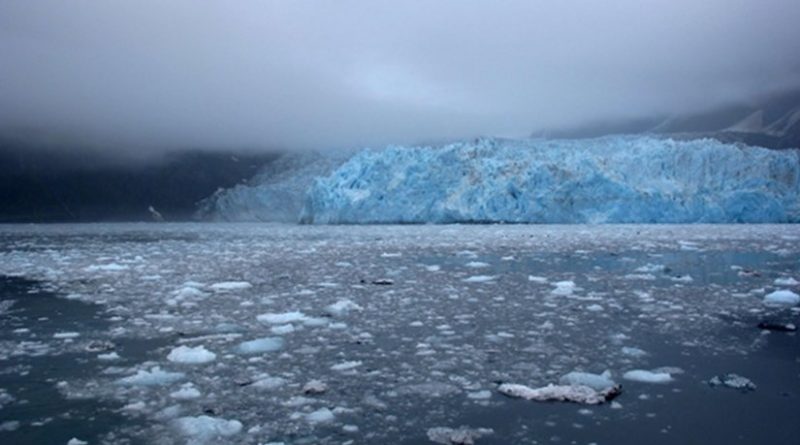 A remnant population of woolly mammoths on a remote Alaska island was likely pushed to extinction by rising sea levels and a lack of access to fresh water, according to a newly published study.

By analyzing layers of a dated sediment core from a lake on St. Paul Island, researchers determined that mammoths went extinct on the island roughly 5,600 years ago, thousands of years after remnant mainland populations died off. The study also indicated that the Bering Sea island experienced a phase of dry conditions and declining water quality at about the same time the mammoths vanished.

The results were published today in the Proceedings of the National Academy of Sciences.

Matthew Wooller, director of the Alaska Stable Isotope Facility at the University of Alaska Fairbanks and a co-author of the study, said past events on St. Paul Island provided a unique opportunity for research. Mammoths were trapped there when rising sea levels submerged the Bering Sea land bridge, and survived about 5,000 years longer than isolated mainland populations. There is no evidence of people having lived on the island during the era.

In 2013, a team of researchers collected a sediment core from the bed of one of the few freshwater lakes on St. Paul Island. Wooller and fellow UAF researcher Kyungcheol Choy measured the stable oxygen isotope ratios of the prehistoric remains of aquatic insects preserved in the sediment from before, during and after the extinction of mammoths from the island.

The remains of aquatic organisms living in lakes retain water isotope signatures within their bodies, which allowed researchers studying their exoskeletons to determine that lake levels had diminished. The remains of diatoms and aquatic invertebrates from the core also changed over time, indicating decreasing lake levels and water quality leading up to the mammoth extinction.

Nitrogen isotope analyses of dated mammoth bones and teeth also signaled progressively drier conditions leading up to the extinction event. Wooller said these “multiple lines of evidence” of decreasing lake levels provide a strong case for what led to the animals’ extinction.

“It paints a dire picture of the situation for these mammoths,” Wooller said. “Freshwater resources look like the smoking gun for what pushed them into this untenable situation.”

The study not only determined one of the best-dated prehistoric extinctions, using state-of-the-art techniques on ancient mammoth DNA preserved in the lake core from St. Paul Island, it also showed the vulnerability of small island populations to environmental change.