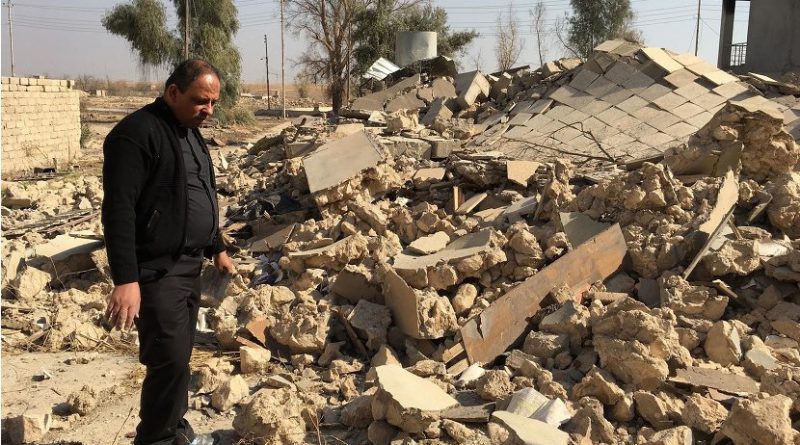 A Catholic church ruined by ISIS in Karamdes, Iraq, is examined by a priest following the predominately Christian town's liberation. Photo Credit: Knights of Columbus.

The Knights of Columbus has announced that it will raise and donate $2 million to save Karamdes, a predominantly Christian town on the Nineveh Plain which was liberated from ISIS late last year.

According to the Knights of Columbus the action will move hundreds of families from minority religious communities in Iraq – especially Christians – back to the homes from which they were evicted by ISIS in summer, 2014.

The Knights’ initiative matches a similar donation by the government of Hungary, which recently donated $2 million to save another predominantly Christian town, Teleskov. About 1,000 families have now moved back to that town, which according to the Knights of Columbus is proof that such actions can actually work in returning Christian populations to pre-ISIS levels in the region.

Like the government of Hungary, the Knights will partner in this resettlement and rebuilding effort with the Archdiocese of Erbil, which is currently housing the largest population of Christian refugees in Iraq, including many of the residents of Karamdes, said the Knights of Columbus.

“The terrorists desecrated churches and graves and looted and destroyed homes,” said Supreme Knight Carl Anderson during his annual report at the Knights of Columbus 135th Supreme Convention. “Now we will ensure that hundreds of Christian families driven from their homes can return to these two locations and help to ensure a pluralistic future for Iraq.”

The Knights are urging K of C councils, parishes or other Church groups, and individuals to help by donating $2,000 – the approximate cost of resettling one family. Just a thousand such donations would be sufficient to reach the $2 million goal. The rebuilding work will begin this week and money will begin flowing to the project immediately.