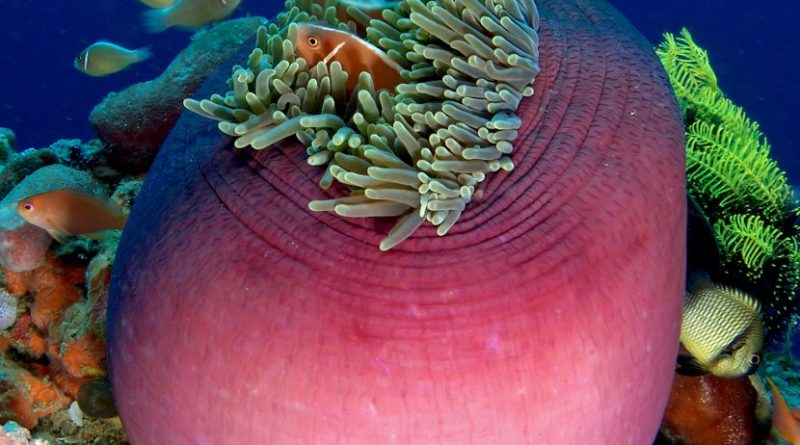 Heteractis magnifica sea anemones contain neuroprotective peptides that slow down the inflammation process and the deterioration of neurons in the development of Alzheimer’s. There is currently no treatment against this disease, Phys.org reports.

The Kunitz-type peptide HMIQ3c1was synthesized by scientists in a bacterial system (Escherichia coli) and is a recombinant analog of the peptide contained in the tentacles of tropical sea anemones Heteractis magnifica—marine sediment dwellers of the class Anthozoa. The sea anemones were collected near the Seychelles during a scientific marine expedition at the Akademik Oparin scientific and research ship. Genetic studies revealed a new group of Kunitz-type peptides in the sea anemone. Using the structure of the gene coding of one such peptide, a scientific team synthesized this peptide’s artificial analog in the lab of G.A. Belyakov Pacific Institute of Bioorganic Chemistry.

The synthesized peptide belongs to the new group of IQ-peptides that named after two first amino acid residues—isoleucine (I) and glutamine (Q). The substance has neuroprotective properties. Therefore, HMIQ3c1 inhibits the development of inflammation, including that fitting the Alzheimer’s model. Patients with Alzheimer’s disease are subject to various neurological disorders, including disorientation and memory loss. The peptide was tested in the lab on the cells of mouse neuroblastoma. It reduced the levels of active oxygen forms that cause cell damage. Such forms usually appear after a cell is influenced by the neurotoxin 6-hydroxydopamine, causing neuron death. The same mechanism is observed in human cells.

“While the inflammation process is a normal reaction of a body to any injury, infection, or other external influence, chronic inflammation can cause many serious disorders—not only the Alzheimer’s, but also Parkinson’s disease, arthritis, pancreatitis, cancer, and other diseases. Proteases are ferments that destroy proteins. They play an important role in the inflammation process, and are therefore among the most desired targets for new anti-inflammatory medicinal drugs,” explains Elena Leychenko, a senior research associate at PIBOC (the Far Eastern Department of the Russian Academy of Sciences), assistant professor, and lecturer at the chair of bioorganic chemistry and biotechnology of the School of Natural Sciences, FEFU.

The search for chemical compounds to prevent neuron death is an important task for science and medicine. Inhibitors of protease have been found in the bodies of many marine invertebrates and mammals. Kunitz-type inhibitors are of utmost interest for the scientists as they are not only able to block the destructive ferments but also to react with various receptors and ionic channels. This makes Kunitz-type inhibitors polyfunctional. They can influence several therapeutic targets at once and solve different tasks simultaneously depending on the circumstances.

Sea anemones are a rich source of such inhibitors. In their previous work, the scientists from FEFU-PIBOC discovered protease inhibitors in Heteractis crispa. The peptides found in H. crispa, as well as the newly discovered peptides from H. magnifica form combinatorial libraries and possess considerable pharmacological potential. Peptides from these libraries have similar structures and, as a rule, one main function. At the same time, chemical compounds from one library can acquire new functions or change (increase or decrease) their main function due to minor structural differences.

“Sea anemones contain a wide range of biological substances with not only neuroprotective but also anti-cancer properties,” says Elena Leychenko. “However, protective properties of these substances and the combinations in which they would work properly require additional studies. The manufacture of new generation drugs may be started only after the completion of all trial stages, including pre- and clinical ones. And this requires extensive funding. If the funds are found, the process would still take 3 to 5 years”.

Peptides are chemical compounds that consist of amino acids with high physiological activity allowing them to regulate various biological processes. Peptides are usually divided into several groups by their bioregulatory properties. However, this division is quite arbitrary as many peptides are polyfunctional, i.e. their activity is not limited to one target.