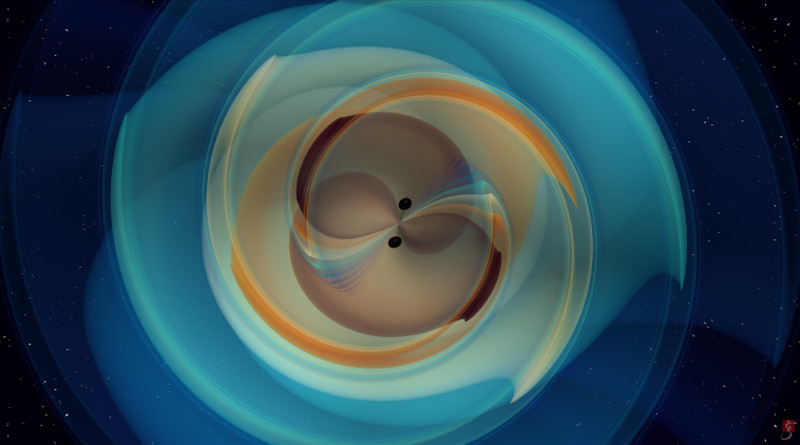 Numerical simulation of two black holes that inspiral and merge, emitting gravitational waves. The black holes have large and nearly equal masses, with one only 3% more massive than the other. The simulated gravitational wave signal is consistent with the observation made by the LIGO and Virgo gravitational wave detectors on May 21st, 2019 (GW190521). © N. Fischer, H. Pfeiffer, A. Buonanno (Max Planck Institute for Gravitational Physics), Simulating eXtreme Spacetimes (SXS) Collaboration

The gravitational wave1 detectors LIGO and Virgo have just chalked up their biggest catch yet, a black hole 142 times the mass of the Sun, resulting from the merger of two black holes of 85 and 65 solar masses. The remnant black hole is the most massive ever observed with gravitational waves, and it could give us some clues about the formation of the supermassive black holes that sit at the centres of some galaxies.The mass of one of the merging black holes, 85 solar masses, provides information that could improve our understanding of the final stages in the evolution of massive stars.The discovery, to which several CNRS teams contributed as part of the Virgo collaboration, is published in the journals Physical Review Letters and Astrophysical Journal Letters.

At first sight, there is nothing particularly new about the detection of the birth of a black hole caused by the merger of two others, accompanied by the emission of a huge amount of energy: after all, a succession of similar events have been observed ever since 2015, when the gravitational waves produced by such phenomena were observed for the first time2. However, GW190521, the signal recorded on 21 May 2019 by the LIGO and Virgo instruments, stands out from the crowd, for the signal is not only the most distant, and therefore the oldest, ever detected (the gravitational wave took seven billion years to reach us), but in addition the black hole resulting from the merger is also the most massive observed so far.

Above all, the observation is the first direct evidence of the existence of ‘intermediate-mass’ black holes, which weigh in at 100 to 100000 solar masses. Such intermediate-mass black holes are heavier than those resulting from the collapse of high mass stars, but much lighter than the supermassive black holes that sit at the centre of some galaxies. Until now, only indirect evidence obtained from electromagnetic observations hinted at their existence.

With masses around 65 and 85 times that of the Sun, the two black holes that were observed to merge intrigue astrophysicists as well. This is because, based on our current knowledge, the gravitational collapse of a star cannot form black holes in the approximate range of 60 to 120 solar masses, since the most massive stars are completely blown apart by the supernova explosion that accompanies the collapse, leaving only gas and dust behind them. So, sitting right in the middle of this forbidden range, how did the black hole of 85 solar masses form? Is there something we haven’t understood about the way in which massive stars end their lives? If it is not of stellar origin, could it too have resulted from an earlier merger of less massive black holes? Or alternatively, could it be a hypothetical primordial black hole, formed during the Big Bang? The observation of GW190521 clearly raises new questions about the formation of the enigmatic objects we call black holes.

Compared to earlier observations, the GW190521 signal detected by LIGO and Virgo is very short and harder to analyse. Due to its more complex nature, other hypotheses involving more exotic sources were also explored to explain it, and such possibilities are described in the article in Astrophysical Journal Letters. However, the most plausible source of this gravitational wave remains the merger of two black holes.