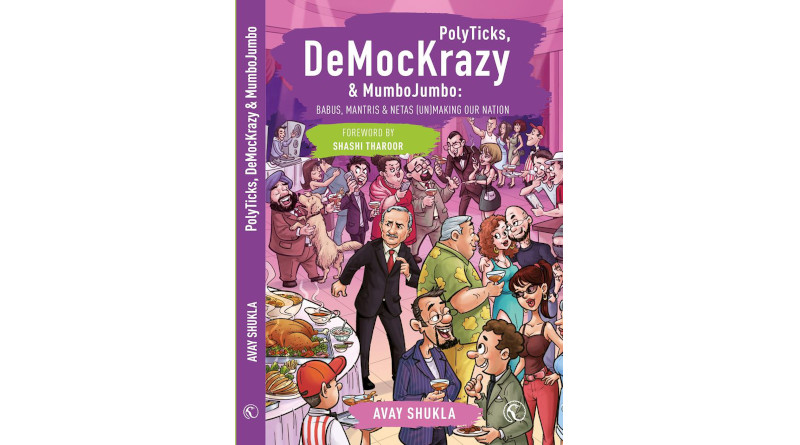 Self-deprecating humour is a survival strategy of human beings, and coping mechanism of the society during the dark times.  That is true to the letter as well as to the spirit when it comes to Avay Shukla’s book ‘PolyTicks, DeMocKrazy & MumboJumbo’. It is an insider masterpiece of political satire on Indian society and politics from 2014 to 2020. The savage critique of political system which is dominated by the ‘alpha male honey badgers of LOOTyen’s Delhi’ comes from author’s relatable frustration and unfatigued commitment to the idea of India and its democratic ideals promised within Indian Constitution.

The book depicts the painful transition of governance and political culture in contemporary India.  Readers will experience Shukla’s words with laughter, and discover a deep sense of responsibility with rib cracking humour within this book. The sharp observations, uncensored reflections on everyday ugly realities, incisive and witty analysis of political culture and leadership in India are pillars of this book. The author did not bother to spare even himself as he calls his four decades long work in the IAS as “dubious service to the public”. But writing this book compensates all professional gaps. The book makes significant contribution to the existing ethnographic literatures on political satires in India. The unretiring spirit of the author blossoms in smiling words with repugnance for a self-serving system that marginalises the masses.

The privileged, uncaring and arrogant Delhi is ‘a city of alfa male Honey Badgers’ who are drunk with power. The corrupt people and leaders are living a subsidised luxurious life in the capital city. They have no concern about the predicaments of everyday life of common men, women and environment in India. The criminal nexus between politicians, businesses and bureaucrats produces a five-star hotel within even Tihar jail. The irony in ‘Tihar Regency’ depicts the onslaught of the powerful and corrupt private capital on Indian democracy.  The Hindu way of ‘unearthing black money’ is a ruthless take on uncanny rituals of good governance in a corrupt system and its celebration within the cultural foundation of hoarding. In spite of growing ‘trust deficit’, the ‘chickens cross the road’ to normalise corporate loot and circulation of elites within Indian society.  In the name of electoral democracy and nationalism, people elect representatives who become their exploiters and oppressors. The author laments the failures of intellectuals and educational systems that create literacy but failed to promote skills and inspire creativity. The manufacturing of trust deficit and its culture has permeated into every step of life in India. The need-based society is transformed into a desire-based society, where beauty no longer “lies in the eyes of the beholder, it lies in the scalpel of the plastic surgeon”. But it is fine as long as you kiss your own wife or ex-wife in a party in the absence of one or the other.

The author has argued for culture of criticism, tolerance and ‘sense of humour’ for the growth of an inclusive and sensitive society in India, which is under threat today. The political correctness in today’s India is producing an illiberal praxis. In such an environment, the fraudulent godmen enjoy freedom whereas the cartoonists and stand up comedians suffer in prison. The judiciaries in India have failed to protect individual freedom and progressive culture. India is becoming a republic of “dumb folks” even if they have smartphones and dream of living in smart cities. The rise of bigoted politicians like Subramaniam Swamy and so called actors like Salman Khan as well as journalists like Arnab Goswami are signs of a degenerate society with rotten growth of MOPHOBIA, NOMOPHOBIA, TEXTAPHRENIA, TEXTIETY, FOMO, SELFITIS, IAD, SMA, PVS, DIGITAL POUTING and FAD. What do these ticklish abbreviations mean?  Well, you need to buy and read this book to understand them, as well as the GLENLIVITAPP turncoat culture of powerplay in South Delhi dinner parties. The “rebooting of India” is impossible as long as politics remains as a playground of elite circulation. The Hindutva politics of “cultural revival” is in fact merely the preservation of old elites and their “animal spirits” by bribing gods and leaders. The GST is the “Graft and Sleaze Tax”. The Aadharbiometric card is surveillance overdrive by the government led by Modi.

Such agonising transitions are accelerated by the death of journalism and the growth of toxic and opinionated “prime time news tyranny” that is free from facts-. ‘The fifty shades of no’ uncovers dwindling integrity in public life, and the collapse of law and order in Indian society. The public health is waiting for its last rites whereas the pious and rich celebrate life under the Hindutva regime. In Modi’s India, the construction of temple is more important than the construction of hospitals. Even the principles of neo-classical economic go for a toss due to ignorance and directionless economic policies of Modi government. The non-performing government is not an asset to the people or to the democratic culture of the country.  Dysfunctional Hindutva politics provides dividends to the corporates while masses suffer in India. Poverty is a business for politicians. Poor people are a major nuisance for governing class. Their corrupt aesthetics is attached to their orderly objects, while living beings with citizenship rights are perpetually unaesthetic.

In the age of propaganda, junk ratings and trash reviews matter more for a corporate driven government than the quality of human lives in the safe republic of holy cows and godmen.  Health, education and human rights are moving to the unfathomable bottom of the sea as the RSS continues to celebrate the rise of Indian cultural nationalism by lynching Muslims. The culture of reactionary agitations is promoted by burning and banning books, censoring films, discarding liberal secularism and beheading reason and science, making impossible any form of social, political and intellectual engagement with national life.   A culture of intolerance and violence is growing in India in the name of cultural nationalism as defined by Hindutva ideologues. So, staying at home is a good travel advisory to people as RSS is converting India into lynchingstan, where sex is against Indian culture. In the age of Durex or Manforce brands advertisement, the cultural choice is confined to public relations driven by Arnab Goswami or Sunny Leone. The twin shall meet to write national glory scripted by the lose cannons of Hindutva politics. Even the food habits are not free from politics in India.

Avay Shukla takes his self-deprecating sense of humour to a different level in ‘playing fast and loose’, ‘dhaan ki baat (wealth talks)’ and ‘what is APP with this world, anyway?’. The fun gets addictive as the pages progress. It is dangerous to drive after reading these sections of the book. One can have an accident by laughing uncontrollably. These sections follow the best traditions of political satire; spares none.  The spirit of Khushwant Singh survives within the humorous writings of Avay Shukla. He has silently employed tropical humour in a cold spa to reflect on degeneration and painful transition of Indian democracy, economy and society. The reviewer needs to pray to our holy cows for the blessing of decolonising himself from cold English humour in order to do justice to a funny and brilliant book. The book is easy and fun to read but astutely reminds the readers their responsibilities as citizens of India. The book leaves you addicted to laughter, as well as a lingering hangover because of its beautiful prose. It is a must read to have fun while understanding the predicaments and irony of contemporary India. The new India is slowly losing its soul and becoming a slaughter house of intelligence and tolerance.

Pippa Rann Books & Media has made it possible for readers to witness Avay Shukla’s wicked sense of humour in ‘PolyTicks, DeMocKrazy & MumboJumbo’, which is a testament to the courage and conviction of a writer and a publisher as well.