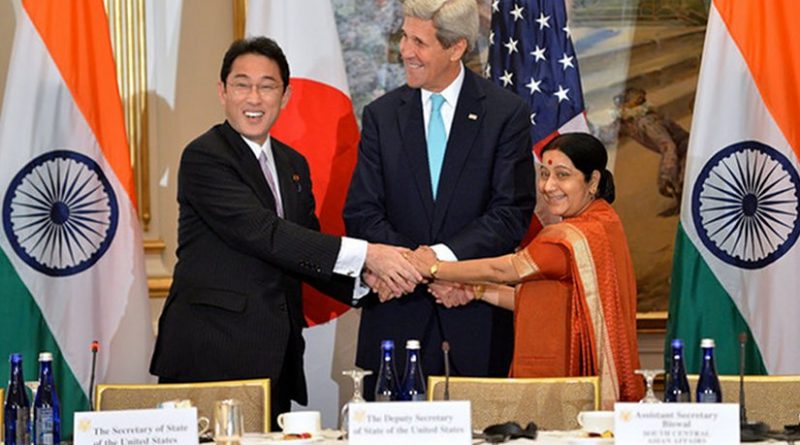 As part of the U.S. “rebalance to the Pacific”, the growing convergence of their respective countries’ interests in the Indo-Pacific region, and with an eye on China’s increasing assertiveness in the South China Sea, Washington has initiated a trilateral dialogue involving both India and Japan.

Stressing the importance of the trilateral dialogue, the first of its kind, the U.S. State Department said in a media note that the United States, India and Japan together represent a quarter of the world’s population and economic production power.

“The three Ministers highlighted the growing convergence of their respective countries’ interests in the Indo-Pacific region. They also underscored the importance of international law and peaceful settlement of disputes; freedom of navigation and overflight; and unimpeded lawful commerce, including in the South China Sea,” the media note said.

Explaining the importance of the Trilateral, Kerry said: “It’s an important moment for us to be able to underscore our interest in the Indo-Pacific region as part of India’s East Asia policy, and also part of Japan’s very active engagement with South and Southeast Asia under Prime Minister Abe.”

India’s External Affairs Minister Swaraj said: “For India, the Asia Pacific and the Indian Ocean region is strategic to our security and economic interests. The sea lanes of communication in the region are the lifeline – the lifeline of India’s trade and commercial externalities. A substantial part of our energy and goods trade passes through the crucial sea lanes of Asia Pacific.”

She added: “As a law-abiding nation, we have always supported the freedom of navigation in international waters, the right of passage and overflight, unimpeded commerce and access to resources in accordance with principles of international law, including the 1982 United Nations Convention on the Law of the Sea (UNCLOS).”

Japan’s Foreign Minister Kishida said: “United States, India, and Japan, working in close cooperation, will be truly significant not only for the bilateral relations of India-Japan, U.S.-Japan, and U.S.-India, but also for the stability and prosperity of the whole Indo-Pacific region.”

In January 2015 when Kishida visited India, he delivered a policy speech entitled ‘The Special Partnership for the Era of the Indo-Pacific’. Kishida said: “The Pacific and the Indian Oceans are beginning to link together as oceans of freedom and prosperity, driving the advent of a new era when Indo-Pacific region becomes the epicenter of global prosperity.”

The State Department informed in a media note: The three foreign ministers reiterated their support for the Association of South-East Asian Nations (ASEAN) centrality in the multilateral political and security architecture in the Asia-Pacific region and emphasized the importance of the East Asia Summit as the premier leaders-level forum for addressing key political and security issues of the region.

The three countries agreed to work together to maintain maritime security through greater collaboration, the State Department said, adding that the United States and India welcome Japan’s participation in the 2015 MALABAR exercise, held in the Bay of Bengal.

Since 2007, India has only hosted Exercise Malabar when the U.S. and India are the two participating parties. Malabar 2009, 2011, and 2014 all took place off the coast of Japan and included the Japanese Maritime Self-Defense Forces.

“In an effort to capitalize on collective capacities in promoting regional economic linkages, the three Ministers launched an experts-level group on regional connectivity to identify collaborative efforts that can help strengthen regional connectivity, including between South and Southeast Asia,” the media note added.

“All three welcomed the inaugural Trilateral Ministerial as a platform for strengthening cooperation and noted their interest in meeting again,” the State Department said.

External Affairs Minister Swaraj said, “the first meeting of India-U.S.-Japan as a trilateral partnership for peace, prosperity, and stability in the region as an effort to strengthen transparency, inclusivity, and the rule of law in the region, and as a commitment to what we can do together for our mutual benefit and also for the larger good of the region.”