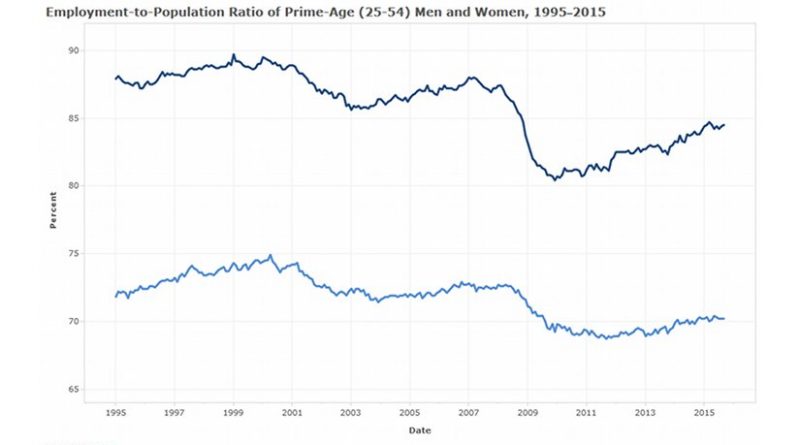 The US Labor Department reported the economy created just 142,000 jobs in September, well below most forecasts. Furthermore, the prior two months’ numbers were revised down as well, bringing the average for the last three months to 167,000. In addition, there was a drop in the length of the average workweek of 0.1 hour causing the index of aggregate hours to decline by 0.2 percent. The household survey also showed a weak picture of the labor market. While the unemployment rate was unchanged at 5.1 percent there was a drop of 0.2 percentage points in both the labor force participation rate and the employment-to-population (EPOP) ratio. The drop in the EPOP brought the ratio back to its level of October 2014.

The weakness in job growth in the establishment survey was spread widely across sectors. The biggest job loser by far was mining, which shed 10,300 jobs in September. Employment in the sector is down 11.7 percent over the last year. Construction employment rose by 8,000, less than half its 17,000 average over the last year. Manufacturing employment fell by 9,000, bringing it back to its January level. The loss of jobs, together with a 0.2 hour drop in the length of the workweek, lowered the index of aggregate hours in manufacturing to 90.0, just 0.1 pp above the year ago level.

Retail added 23,700 jobs while health care added 34,400 jobs, both roughly in line with growth over the last year. The temporary help sector added just 4,600 jobs, bringing the total loss in the sector over the last three months to 100 jobs. Restaurants added 20,700 jobs, somewhat below the 29,000 average over the last year. The government added 24,000 jobs, with all the growth at the state and local level as federal employment fell by 2,000. The September gains, combined with an increase of 64,000 the prior two months make for the largest three month growth (excluding census hires) since before the recession. Nonetheless, government employment is still 347,000 below the level at the beginning of the recession.

Other news in the household survey was mixed. The share of unemployment due to people who voluntarily quit their jobs remained at the low 9.8 percent rate of August, a level typically seen in recessions. The duration measures all fell slightly, reversing some increases in the prior two months. The one piece of clear good news in the survey was a drop of 447,000 in the number of people working part-time for economic reasons. This number is erratic, but this is an unusually large one-month decline.

On the whole this report suggests the labor market is considerably weaker than had been generally believed. The plunge in oil prices is taking a large toll on the formerly booming mining sector. In addition, the high dollar and the resulting trade deficit is a major hit to manufacturing. The 138,000 three-month average rate of private sector job growth is the lowest since February of 2011. The strong growth in government jobs is not likely to continue with budgets still tight. With GDP growth hovering near 2.0 percent, weaker job growth is to be expected, but it will make it much more difficult for the Federal Reserve Board to raise rates this year.