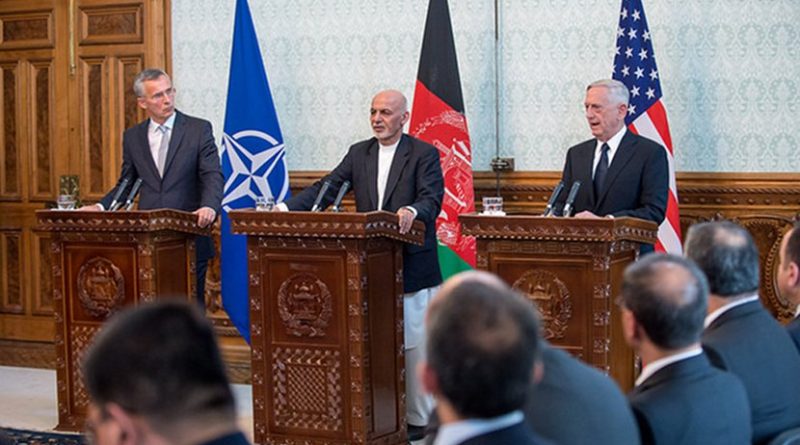 Hours after US Secretary of Defence James Mattis landed in Kabul, he was welcomed with six rockets landing near Kabul’s international airport, as if to remind Washington what’s at stake in the ongoing conflict in Afghanistan. This visit came weeks after the Trump administration unveiled its South Asia strategy which in many ways marks a radical departure from the past by putting Pakistan on notice and bringing India to the centre stage of Washington’s Afghanistan policy.

This was reinforced by Gen. Mattis during his visit to India this week when he suggested India and the US would work together to fight terrorism. “There can be no tolerance of terrorist safe havens,” he said. “As global leaders, India and the United States resolve to work together to eradicate this scourge.” While announcing his new Afghanistan policy, US President Donald Trump had mentioned, “We appreciate India’s important contributions to stability in Afghanistan, but India makes billions of dollars in trade with the US, and we want them to help us more with Afghanistan, especially in the area of economic assistance and development.”

In line with this, Defence Minister Nirmala Sitharaman made it clear that while “there shall not be boots from India on the ground in Afghanistan,” New Delhi will be stepping up its development and capacity-building engagement with Afghanistan.

India has decided to take up 116 “high-impact community developmental projects” in 31 provinces of Afghanistan. India and Afghanistan have also agreed to “strengthen security cooperation”, with New Delhi agreeing “to extend further assistance for the Afghan national defence and security forces in fighting the scourge of terrorism, organised crime, trafficking of narcotics and money laundering”. India will be training Afghan police officers along with Afghan soldiers. This is aimed at sending out a message to Pakistan, which continues to assert that India has “zero political and military role” in Afghanistan.

After handing over four attack helicopters to Kabul as part of its assistance package, India is keen to expand the scope of its security cooperation with Afghanistan which had remained limited in the past not only due to geographical constraints, but also due to Washington’s desire to limit India’s security engagement in the country.

The US is sending about 3,000 more troops to Afghanistan, most of which are preparing to arrive in the coming weeks. “A lot is riding on this of course as we look toward how do we put an end to this fighting and the threat of terrorism to the Afghan people,” Gen. Mattis said in Kabul. “We are here to set the military and security conditions for that but recognise ultimately the responsibility for the Afghan leadership to step up and fully own the war.”

The convergence between India and the US on Pakistan has evolved at an extraordinary pace. The Trump administration’s hardline approach on Pakistan’s support for terrorism comes at a time when New Delhi has led an active global campaign to marginalise Islamabad and bring its role as a state sponsor of terror to the forefront of the global community. During Gen. Mattis’s visit, Ms. Sitharaman reminded the US that “the very same forces which did find safe haven in Pakistan were the forces that hit New York as well as Mumbai.” Mr. Trump had made it clear that Washington “can no longer be silent about Pakistan’s safe havens for terrorist organisations, the Taliban and other groups that pose a threat to the region and beyond.” The Xiamen BRICS declaration earlier this month also listed Pakistan-based terror organisations for the first time. It is not surprising, therefore, that Pakistan’s Foreign Minister has had to admit that terrorist Hafiz Saeed and terror group Lashkar-e-Taiba (LeT) are a “liability” for his country and for the South Asian region.

Stronger ties with US

The visit of Gen. Mattis also underscored the growing salience of defence ties in shaping the trajectory of Indo-US relations. Washington is no longer coy about selling sensitive military technologies to India. China’s growing assertiveness in the wider Indo-Pacific is a shared concern and this was reflected in the reiteration by the two countries of the critical importance of freedom of navigation, overflight and unimpeded lawful commerce in the global commons. Bilateral defence ties have been growing in recent years, “underpinned by a strategic convergence”. As Gen. Mattis suggested, the US is looking forward to “sharing some of our most advanced defence technologies” with India “to further deepen the robust defence trade and technology collaboration between our defence industries.”

The sale of 22 Sea Guardian Unmanned Aerial Systems, which was announced during Prime Minister Narendra Modi’s visit to the US earlier this year, is high on the agenda. With this deal, the Indian Navy will not only acquire the world’s most advanced maritime reconnaissance drone, it will also lead to greater defence technology sharing.

As India and the US expand military cooperation in the Indo-Pacific, new alignments are emerging which have the potential to reshape the regional security architecture. In the past, India had been reluctant to play an active role in East and Southeast Asia. Now as part of its ‘Act East’ policy, India’s engagement with the region has become more robust and Washington has been encouraging India to shape the regional strategic realities more potently. At a time when regional security in the wider Indo-Pacific has taken a turn for the worse, the US is looking at India to shore up its presence in the region. And India, driven by China’s growing profile around its periphery, is keen to take up that challenge.

Gen. Mattis’s visit has highlighted the growing convergence between the US and India on key regional and global security issues. As the two nations move ahead with their ambitious plans, the challenge will be to sustain the present momentum given the myriad distractions that Washington and New Delhi have to contend with.