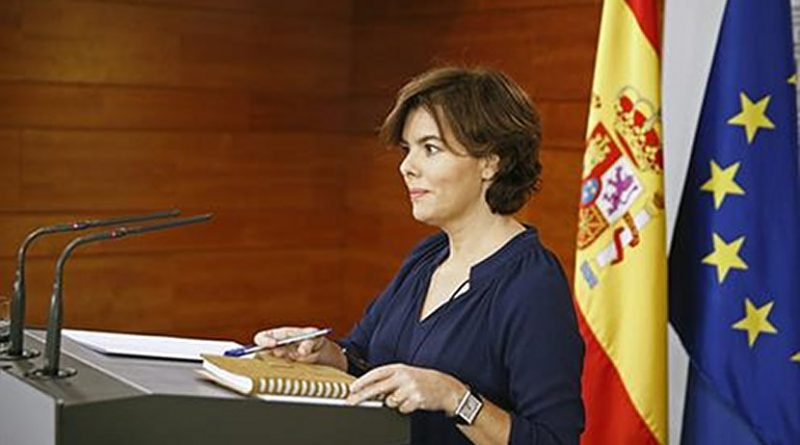 Spain’s Vice-Prime Minister, Soraya Sáenz de Santamaría, in a press briefing to assess the day’s events in Catalonia, called for the Regional Government of Catalonia to stop being “irresponsible” and to stop this “farce” of a referendum. She also acknowledged the actions by the State law enforcement agencies to defend the law.

Following are comments made by Soraya Sáenz de Santamaría as released by Moncloa.

“A very good day to everyone. I appear here before you, on behalf of the government, to assess the situation caused in Catalonia as a result of the decision taken by the Regional Government of Catalonia to maintain its determination to hold an illegal referendum. This attempt was, from the very outset, unconstitutional, anti-democratic but, most importantly, it went against all our standards of co-existence. And, since it is incompatible with our democratic rules, it could not be held and nor has it been held.

The rule of law, applied firmly and proportionally, has thwarted all the plans and intentions of the Regional Government of Catalonia. Prior to today, this attempt did not meet the most basic and elementary democratic requirements. Its backers ignored all the parliamentary rules to try and give an appearance of legality which was immediately suspended by the courts. This attempt is a democratic disgrace to the people of Catalonia and to the people of Spain as a whole, who have seen their rights infringed for not agreeing with the aims of the pro-independence forces.

The Regional Government of Catalonia and those on their side decided to proceed despite receiving no official backing and despite the rule of law eroding any entitlement to hold this referendum. There was no official census, or legally constituted polling stations, or official premises accredited, or electoral board to guarantee the neutrality of the process. They were warned by international bodies that their attempts to proceed with the referendum were discredited. Mayors, regional councillors, public servants, journalists and citizens lodged claims against the anti-democratic methods that they were victims of.

Despite the proven illegality and numerous judicial rulings, they still sought to proceed, and they decided to mobilise their followers to impose their wishes by using children and the elderly without any compunction. Today, after the latest actions by the justice system, they even decided to change the few instructions given by the Regional Government of Catalonia and, in an unprecedented attempt under any democracy, less than an hour before voting was due to take place, they ran roughshod over any attempt at appearing to hold a referendum. The Regional Government of Catalonia has acted in a wholly irresponsible manner, it has tried to eliminate any form of law and justice, and hence, democracy, in Catalonia; but we have seen that the democratic rule of law works and that it has tools at its disposal to ensure that court rulings that protect the rights of everyone are upheld.

The absolute irresponsibility of the Regional Government of Catalonia has had to be replaced by the professionalism of the law enforcement agencies. They have complied with the rulings of the system of justice, they have acted professionally and proportionally. The targets of their actions have never been individuals but the electoral material. They have always sought to protect individual rights and liberties.

I would like to take this opportunity, here before all of you, to acknowledge their efforts at this time. They have complied with their democratic obligation, they have attended to the judicial instructions and the requests for support that the Mossos [Regional Police Force of Catalonia] sent them, and informed the Government Representative in Catalonia accordingly.

No referendum has been held, or any semblance of one. It never made sense to head down this irrational path and it makes no sense to continue doing so. I would ask the Regional Government of Catalonia and the political parties that supports it to stop being irresponsible, and henceforth take on board that what was never legal is now clearly untenable. It makes no sense to continue with this farce which is not heading anywhere. They should stop this right now.

It is in their hands to bring this situation to an end. The people of Catalonia and of Spain as a whole have gone through weeks of great democratic uncertainty. We have seen how some people have sought to bring to an end centuries of a shared way of life and decades of democratic stability, how some people who should be the first to uphold the law have flaunted their disobedience, but Spain is a democracy, a consolidated democracy, a strong democracy in which the rights and liberties of individuals prevail above the personal claims of their governors. These citizens have seen today how their rights have been restored, their shared way of life guaranteed and their liberties protected because this is all a part of living together in a democracy.

I am totally sure that the government and the State institutions as a whole, as has been seen in recent days, work to oversee our democracy, to ensure that the liberties of our citizens are guaranteed and to recover the harmony that exists among all the people of Spain.

Thank you very much”.

Home » Spain Government: ‘There Has Been No Catalonia Referendum Or Any Semblance Of One’ – Transcript