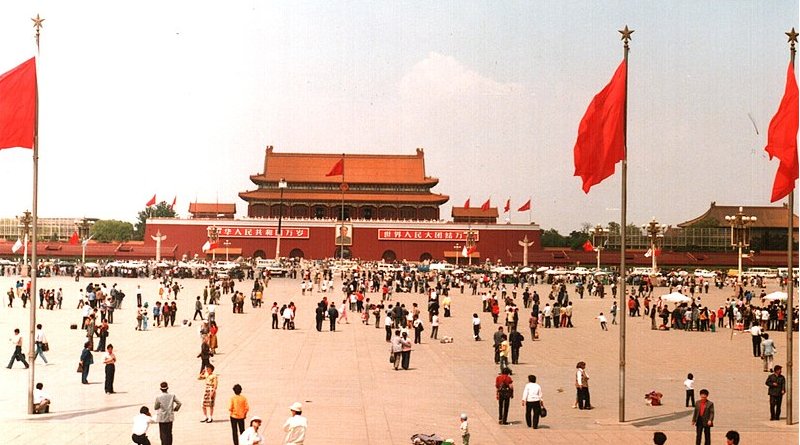 On Tuesday, the People’s Republic of China marked the 70th anniversary of the founding of the country’s communist regime. While some world leaders offered congratulations, others reflected on the nation’s long history of human rights abuses.

The White House and State Department offered official best wishes on behalf of the administration. President Donald Trump tweeted his congratulations to Chinese President Xi Jinping and the Chinese people on Tuesday morning. On Friday, Secretary of State Mike Pompeo offered his own greeting to the Chinese people, saying that the U.S. “wishes the people of China happiness, health, peace and prosperity in the year to come.”

By contrast, Sen. Ben Sasse (R-Neb.), a member of the Senate Select Committee on Intelligence, issued a statement on Tuesday that referenced the shooting by a police officer of an 18 year-old protester in Hong Kong earlier that day.

“The freedom-seekers in Hong Kong mourn this anniversary, and the American people stand with them against those who deny their God-given dignity.”

Ongoing protests in Hong Kong, in which Catholics have played a significant role, have opposed China’s communist regime and have reportedly led worries within the government that mainland Catholics could push for a similar uprising. Travel by some Catholics to Hong Kong has reportedly been restricted.

The protests began in June in opposition to a proposed law that would allow the extradition of alleged criminals from Hong Kong to the Chinese mainland for trial; despite the bill’s suspension, the protests have since continued in opposition to alleged police brutality and in favor of more open democracy.

The backdrop to this is China’s record of human rights abuses and disregard for freedom of religion.

For decades, the Chinese Communist Party instituted a coercive “one-child policy,” the 39th anniversary of which was marked last week. The coercive population control policy was begun in 1980 and enforced with brutality—forced abortions and sterilizations of any woman not complying with the policy.

In 2015, the cap was increased to two children per family, but reports of forced sterilizations and abortions have continued. In 2018, NPR reported that a woman from Xinjiang had to undergo the forced abortion of her third child.

Chinese president Xi Jinping has also embarked upon a comprehensive campaign to bring religion in China under the control of the Communist Party. In 2016, he gave a speech at the National Religious Work Conference, where he explained his demand for the “sinacization” of religion, or the effort to make religion conform with Chinese culture and the CCP party line.

Under the Chinese “Regulations on Religious Affairs” that were implemented beginning in February of 2018, “unauthorized” religious teachings have been effectively banned in China.

Religious freedom advocates in the U.S. have warned that, due to “sinacization,” persecution of religious minorities and unregistered churches is worse than ever.

The co-chair of the U.S. Tom Lantos Human Rights Commission, Rep. Chris Smith (R-N.J.), said at a June 27 hearing that “I have been in Congress since 1981, I have worked on human rights in China since 1981,” yet the level of religious persecution there “has never been worse than it is right now.”

The U.S. Commission on International Religious Freedom (USCIRF) has continued to recommend that China be listed by the State Department as a “country of particular concern,” or among the worst violators of religious freedom in the world.

In Xinjiang, more than one million Uyghurs and other Muslims—possibly more than two million, USCIRF estimates—have been detained in “re-education” camps with reports of psychological and physical torture. The region is subject to mass surveillance, and Muslims have been arrested for religious practices such as reading from the Quran, growing a beard, or observing Ramadan.

Questions have also arisen about a provisional agreement between the Vatican and China on the appointment of bishops, reached last September, in an attempt to unify the Chinese underground Catholic Church and the state-recognized Chinese Catholic Patriotic Association.

Under the agreement, episcopal candidates can be selected by the Chinese Catholic Patriotic Association for Vatican approval. Cardinal Joseph Zen, the emeritus archbishop of Hong Kong, was among the foremost of critics of the deal, warning that the Chinese government would influence the selection of candidates and the Vatican could be put in the defensive position of having to decline candidates.

The Vatican’s Secretary of State Cardinal Pietro Parolin, however, has expressed optimism that the Holy See and China can work together for the common good in the future.

In an interview with the Global Times—owned by CCP Central Committee’s official newspaper—published on May 12, Parolin said that the Vatican and China, “two ancient, great and sophisticated international entities,” could work to “build a more secure and prosperous world.”

Catholic “inculturation” and “sinicization” could be “complementary,” Parolin said, and they “refer to each other without confusion and without opposition.”

“There is confidence that a new phase of greater cooperation can now be opened for the good of the Chinese Catholic community and the harmony of the whole society,” he said, referring to the deal on bishops.

Despite Vatican optimism, U.S. advocates have warned that the Chinese persecution of the underground Catholic Church has grown worse.

U.S. Ambassador-at-Large for International Religious Freedom Sam Brownback said in a March speech in Hong Kong that “the Chinese government’s abuse of members of Catholic communities has continued,” and “[w]e see no signs that will change in the near future.”

USCIRF also reported that persecution of the underground church increased in the latter half of 2018.

Brownback cited other troubling developments in the mainland—Catholics in the Henan province under the age of 18 had been prohibited from attending Mass, and hundreds of Protestant and “underground” Catholic unregistered churches were shuttered by the government. Churches in Zhejiang province were being desecrated by government officials. Online sales of the Bible were being banned by government officials in 2018, and more than 900 Falun Gong practitioners were arrested for practicing their faith.

In addition, the magazine Bitter Winter has reported that several Christian house churches have been ordered to remove displays of the Ten Commandments and replace them with quotes by Xi Jinping.