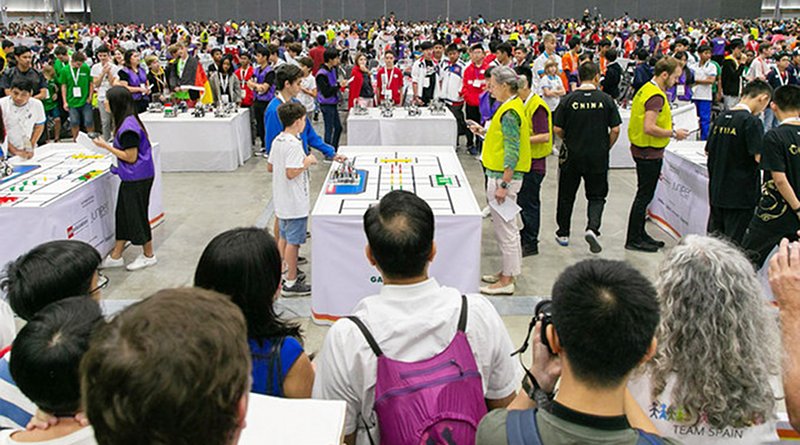 The tournament is organized by Ministry of Communications and Information Technology (MCIT) in partnership with a number of government and private entities, including the Ministry of Education, the Saudi Federation of Cyber Security and Programming, King Abdul Aziz City for Science and Technology and the Saudi Wireless and Remote Control Sports Federation.

WRO 2019 in Saudi Arabia is sponsored by ThinkTech, an initiative launched by MCIT that explores technology developments, achieving sustainable development and building an innovative and informed generation, all integrated with the Kingdom’s Vision 2030. It aims to enhance the role of the ICT sector in building a digital society, digital government and a thriving digital economy throughout the Kingdom.

ThinkTech is linked to the STEAM approach, an educational method which focuses on the use of science, technology, engineering, arts and mathematics as access points for youth in robotics and artificial intelligence applications. Eight hundred trainees have benefited from the ThinkTech platform, paving the way for the local, regional and international WRO competitions.

Three hundred contenders will compete in the 2019 competition in four categories and four age groups. The Regular Category, where teams design, construct and program their robots to solve specific challenges in a field for four age groups — up to 10 years, Elementary (up to 12 years). Junior (13-15 years) and Senior (16-19 years); the Open Category where participants create their own intelligent robotics solution relating to the current theme of the season, which is for two age groups (13-15 years and 16-19 years); the Football Category of autonomous robots playing football, which is for one age category (10-19 years old); and the Advanced Robotics Challenge, where games are designed to test older and more experienced students’ engineering and programming skills to the limit, and is for one age group (17-25 years old).

The winners will qualify for the first time for the WRO 2019 International Final to be held in Gyor, Hungary, on Nov. 8-10.

The Kingdom today is using robots in all sectors, including Hajj and Umrah. For example, “robot” technology has been used for medical consultations during Hajj season in August.

The Saudi Health Ministry launched robot technology to offer diagnoses to patients and offer medical consultations at hospitals in Mina, and in medical caravans.

The technology includes tools such as specialized cameras to check eyes and ears, as well as cameras to inspect the skin, to enable doctors to make a diagnosis and offer consultations.

JHAH’s robotic surgery program began in December 2016 when Dr. Tareq M. Al-Tartir, JHAH sub-specialist surgeon, and his team collaborated with Dr. Mohamad Allaf, professor of urology, oncology and biomedical engineering at Johns Hopkins School of Medicine (JHSoM) and director of minimally invasive urology, and his team. They jointly conducted the first surgeries in the Kingdom using the da Vinci Xi robotic surgical system. The program has since expanded and includes gynecological and bariatric surgeries.

It should also be noted that Saudi Arabia is the first and perhaps the only country in the world that has granted citizenship to a robot, in this case one named Sophia.

Saudi Arabia is in the midst of an unprecedented economic, social, and development-accelerated transformation, all in the context of Saudi Arabia’s Vision 2030.