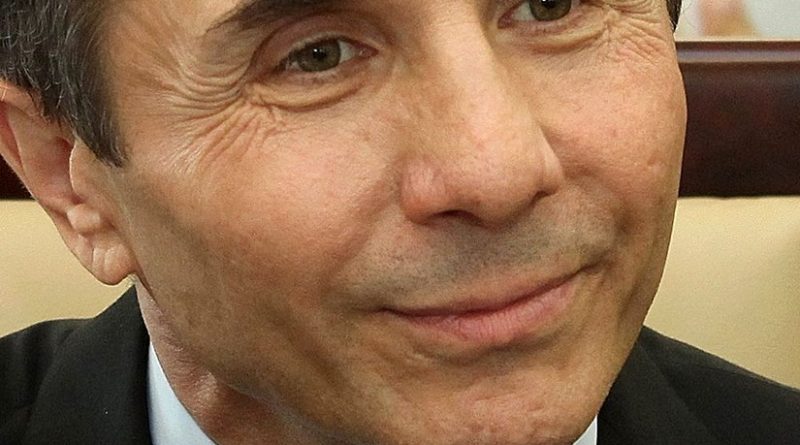 (Civil.Ge) — Billionaire-turned-politician, Bidzina Ivanishvili, who became ineligible to either form or finance a political party after being stripped of his Georgian citizenship, said that he would manage to regain his Georgian passport with the help from the Georgian people and international community.

“I want to assure you that the Georgian population together with the international community will manage to force Saakashvili to restore my Georgian citizenship. But if it fails to happen we have parallel plans, but the result will be the same in both ways – we will come into power through elections and change Saakashvili’s government through elections,” he said without going into details of “parallel plan”.

“No action whatsoever by Saakashvili whether legal or illegal, will derail us from the path leading to elections and I assure you that we will change Saakashvili government through elections,” he said.

Ivanishvili made the remarks at his first-ever news conference in a steel-and-glass hall of his hilltop headquarters packed with journalists.

The press conference was often marred by noisy attempts from journalists to seize an opportunity to ask their questions to Ivanishvili with some of them doing it without listening to the respondent’s answer on previous question and Ivanishvili’s spokesman Irakli Tripolski was often failing in moderating the press conference. Journalists from the nationwide broadcasters were especially active, sometimes even engaging in verbal exchange with Ivanishvili. “Public TV is not obliged by the law to provide live coverage of the press conference… You shun away from answering questions,” a reporter from the Georgian public broadcaster told Ivanishvili at one point.

When the same journalist asked him whether “unprecedented” security check which journalists had to undergo before entering Ivanishvili’s headquarters, was the method that would define his future cooperation with journalists and whether “it’s the democracy by which you want to astonish the Europe”, Ivanishvili responded: “You have been instructed to ask these questions; ask what you personally are concerned about.”

Ivanishvili’s press office said that it had received about 200 requests for accreditation. Journalists had to go through metal detector before entering the billionaire’s headquarters overlooking Tbilisi.

At one point during chaotic press conference, a journalist from Real TV, the Tbilisi-based television station often criticized for ignoring any journalistic standard while targeting opposition figures, managed to ask Ivanishvili: “I want to know a real reason of why you don’t love sparrows – because your penguin has eaten it and died, or because it destroys swallows’ nests?”

“I thought better of [Interior Minister Vano] Merabishvili than that,” Ivanishvili added, referring to allegations that the Real TV is controlled by the Interior Ministry.

When asked what he thought about Georgia’s contribution to the operation in Afghanistan, Ivanishvili responded: “Through contribution of troops in Afghanistan and Iraq [in 2003-2008] we managed to have small partnership with the United States and with such a big alliance [referring to ISAF]. I think that our [Georgia’s] position in this regard is very interesting and I will do my best to have the partnership with such a big alliance in future too.”

He also added that a decision whether to further increase or downscale Georgian troops’ contribution to ISAF should be made based on a thorough analysis.

Asked whether he would continue process of Georgia’s NATO integration, Ivanishvili responded: “NATO standards definitely require the existence of high democratic institutions in the country. Saakashvili, with his authoritarian inclinations, has actually abolished these [democratic] institutions in Georgia and by doing so has delayed [Georgia’s] NATO chances for a long time.”

He said that Russia’s WTO accession would be positive as it would help to bring Georgia’s northern neighbor under the organization’s rules. Ivanishvili, however, said that the Georgian authorities had to agree on the deal because of pressure from the West. He downplayed importance of international monitoring of trade across the disputed borders, which Georgia says is part of the proposal tabled by the Swiss mediators and accepted by Tbilisi. He said that Georgia, whose wine and mineral waters are barred from the Russian market, could have gained more from the potential WTO deal with Russia.

Ivanishvili, who has vowed to win “absolute majority” of seats with his party and “healthy opposition forces” in the parliamentary elections year later, said on November 1 that he would seek President Saakashvili’s impeachment.

“After coming to Parliament with majority we will immediately launch discussing the issue of his impeachment if he himself fails to file for resignation,” he said.

At the time when the new parliament is convened after the elections, scheduled for October 2012, President Saakashvili will still have one year remaining in office.

Ivanishvili, who also vows to change the constitution after winning the parliamentary elections, said in his previous statements that he was eying either the post of PM or parliamentary speaker.

Asked about his stance towards, ethnic, religious and sexual minorities, Ivanishvili responded: “I believe, that they are equal members of our society. Stance towards them will be the same as to other members of the society.”

He said the next year’s parliamentary elections “will be absolutely different” from previous ones. He said that Saakashvili’s ruling party would receive so “few votes” that it would make it impossible for him “to legitimize” large-scale ballot fraud.

“Even his own mother will not vote for Saakashvili. Even his own circles does not need him any more,” Ivanishvili said.

Ivanishvili also said that he would try to rely mainly on “new faces” while building his political party. He also reiterated desire to cooperate closely with Irakli Alasania’s Our Georgia-Free Democrats and Republican Party, led by Davit Usupashvili.