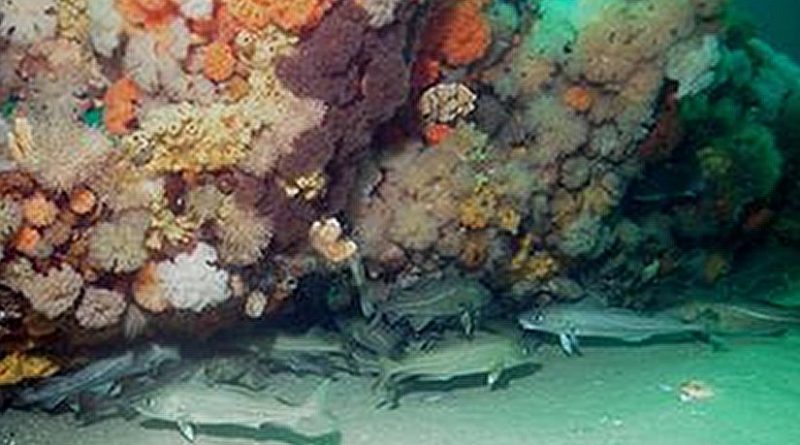 Bottom-dwelling fish such as Atlantic cod are often found near structures such as shipwrecks. Credit: NOAA

For centuries, cod were the backbone of New England’s fisheries and a key species in the Gulf of Maine ecosystem.

Today, cod stocks are on the verge of collapse, hovering at 3-4% of sustainable levels. Even painful cuts to the fishery have failed to slow this rapid decline, surprising both fishers and fisheries managers.

Now a report published this week in the journal Science links the cod collapse directly to rapid warming of ocean waters.

“Here is an explanation for why the Gulf of Maine’s cod fishery has not recovered despite significantly reduced fishing,” said Mike Sieracki, program director in the Division of Ocean Sciences at the National Science Foundation (NSF). “Management plans will need to incorporate climate change factors to be effective.”

NSF funded the research through its Coastal SEES (Science, Engineering and Education for Sustainability) Program.

Between 2004 and 2013, the Gulf of Maine warmed faster than 99 percent of the global ocean. The rapid warming was linked to changes in the position of the Gulf Stream and to climate oscillations in the Atlantic and the Pacific. These factors added to the steady pace of warming caused by global climate change.

Over the past decade, in the face of quickly declining cod stocks, fisheries managers placed a series of restrictions on harvesting this key Gulf of Maine species. Even strict quota limits on fishers failed to help cod rebound.

“Fishers stayed well within their limits for cod, and yet stocks continued to decline” said Andrew Pershing, chief scientific officer of the Gulf of Maine Research Institute (GMRI) and lead author of the study. “That told us something else was going on–and it turns out that warming was driving the decline.”

The models used by managers to set quotas for cod did not account for the effects of rising temperatures, leading to quotas that were too high.

Fishers stayed within their quotas but still took more fish than the population could sustain.

“This creates a frustrating situation that contributes to mistrust among fishers, scientists and managers,” Pershing said.

According to the report, recovery of Gulf of Maine cod depends on sound fishery management and on knowing water temperature.

The study shows the risk of not including water temperature in fisheries models, especially for stocks like Gulf of Maine cod at the edge of their range.

The warmer climate gets, the less fisheries managers can rely on historical data, Pershing noted.

“The ability to predict the effect of warming on fish stocks will be an important part of adapting fisheries to a changing climate,” he said.