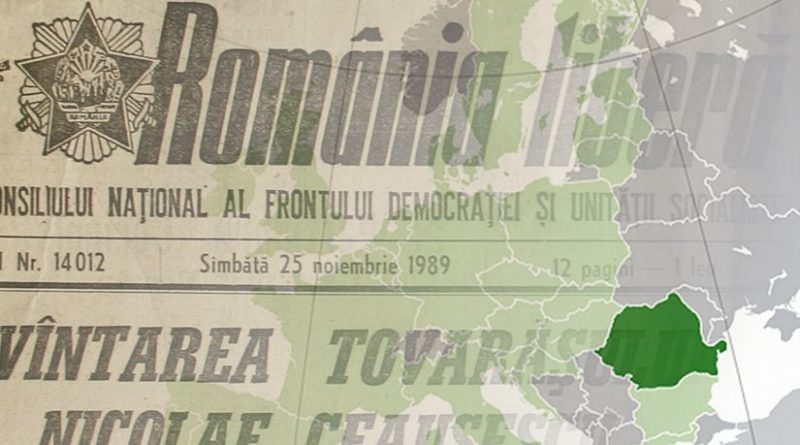 On the eve of Romania’s independence in 1877, a small group of courageous journalists gathered together to launch a new newspaper. From its humble beginnings, România Liberă sought to be a fearless voice, a check against the powerful, often at great risk to our staff and supporters. For 140 years, we have carried on that proud tradition, publishing boldly independent investigative journalism in a country where such endeavors are rarely rewarded. But now, within a week’s time, we may be permanently shut down.

What’s impressive about the plight of our newspaper is not that we have lacked readership or a sustainable business model. We were not directly seized by the Romanian government, we were not gagged by the threats of thugs, or shut down by the police in the traditional vein of heavy-handed state censorship. Instead it was the accountants who came forward to do the dirty work to drive România Liberă into insolvency and silence one of the country’s strongest voices of criticism.

Over the course of our paper’s history, we have broken historic news stories, exposed government corruption, and have shined a light into the dark corners where power is been abused. With a firmly pro-democratic editorial stance, our paper advocated for Romania’s inclusion in NATO and the European Union, and stood firm against the retrogressive policies of communist political movements. In 2012, we published groundbreaking reports on the controversial second attempted impeachment of President Traian Băsescu, highlighting the role of powerful Prime Minister Victor Ponta and the Social Liberal Union (USL) coalition.

Thanks in part to the reporting by România Liberă, then-Prime Minister Ponta’s extra-judicial tactics – including suspicious emergency decrees, the sacking the speakers of both chambers of parliament and threatening to remove judges who could stand in the way of impeachment – were sharply criticized by the European Union.

In a rebuke to Ponta in the midst of this scandal, President of the European Commission Jose Manuel Barroso finally reigned in the prime minister, stating: “Challenging judicial decisions, undermining the constitutional court, overturning established procedures and removing key checks and balances have called into question the Government’s commitment to respect the rule of law.”

This series of articles, of course, did not make România Liberă very popular with the Social Democrat Party (PSD), and in fact made us the most inconvenient voice for Ponta and his cohorts. The pressures against our newspaper deepened following the publication of a series of investigative reports regarding the cronyism of the Ponta government in 2014, revealing millions of dollars of public contracts funneled to companies controlled by family and friends.

Now, it appears that the enemies of the newspaper have finally achieved their goal of silencing our publication. Earlier this week, the editors and journalists of România Liberă published an urgent final plea to the global chairman of KPMG International, the firm appointed to oversee bankruptcy proceedings of our holding company. As we acknowledge clearly in this letter, we stand no chance of resistance against this onslaught of auditors and lawyers as they pound the final nail into the newspaper’s coffin. All we can do is tell the world our story, and put the facts on record.

The attack on România Liberă dates back to January 18, 2014, when the Romanian supervisory authority Autoritatea de Supraveghere Financiara (ASF) appointed KPMG Advisory Special Administrator of Asigurare Reasigurare ASTRA S.A. (Astra), Romania’s largest insurance company and one of the financiers of the paper. Although a restructuring plan was proposed by KPMG, none of it was implemented and instead the accounting firm prevented us from repaying debts and refused all settlement offers in order to drive us into insolvency.

Many observers have described the process initiated by the government to intervene and take over Astra as a politically motivated campaign aimed at jailing businessman Dan Adamescu and silencing România Liberă. Whatever one may think about this complex series of cases, it cannot be easily explained why a state-appointed administrator would reject repayment of Astra’s debts, or why KPMG would then later be named as liquidator of a company that they themselves bankrupted.

While these sorts of tactics may seem commonplace in Vladimir Putin’s Russia, it is entirely unacceptable for such flagrant censorship to be taking place within a European Union member state, and even more disheartening that so few of our colleagues in Brussels and elsewhere are aware of our plight.

As we stand on the brink of disappearance, we are comforted by the knowledge that this reprehensible conduct will not remain in the dark forever. Our story will be told, and the facts are right there to be discovered. We hope that this legacy of outspoken, fearless journalism will be inherited by a new generation of writers to carry Romania into the future, and that those who favor censorship to dialogue will learn that some voices can never be silenced.

*Sabin Orcan is Editor in Chief of the daily newspaper România Liberă (http://www.romanialibera.ro/)