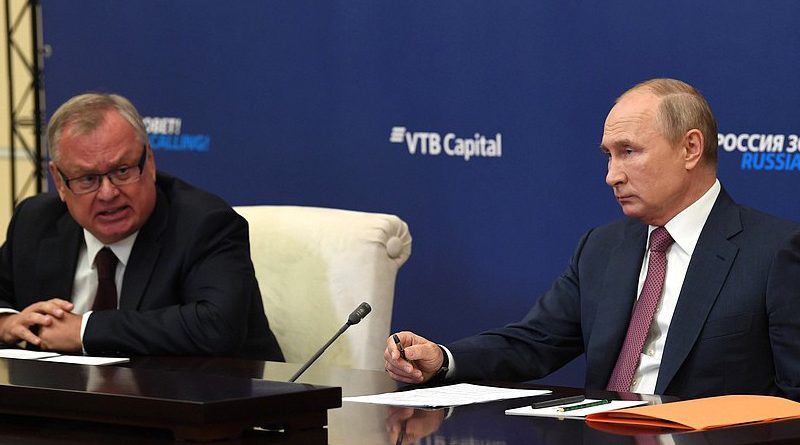 Over the years, Small and Medium Scale Businesses (SMEs) have been uttermost focus for the Russian government recognizing the fact that these provide employment and support the overall economy. Despite the coronavirus pandemic, the government has seriously prioritized the sector, urged the support of financial institutions in order the secure, at least, incomes and employment places of the population.

Late October, two significant business events were held in Moscow. The first was the annual gathering of the Valdai Discussion Club and the second was Russia Calling! Investment forum. At both gatherings, President Vladimir Putin gave an overview of the small and medium scale business sector in the changing economy of Russia. Besides this, he has been talking about the importance of strengthening support for businesses during weekly executive meetings with Ministers of State.

But what is interesting is that the Valdai Discussion Club and the Russia Calling participants had the chance to express their views and give assessment of the economy with the Russian leader. On the other hand, Putin had the opportunity, not only to listen to academics and researchers, sometimes even opposing views of the current developments, but also enjoyed interactive exchange of opinions with potential investors, an insight into the mood of business partners both in Russia and abroad. It gave them an idea of government priorities and plans about the economic development.

President Vladimir Putin addressed the plenary session of the 12th VTB Capital Russia Calling! Investment Forum held on October 29 from his office in Novo-Ogaryovo, located in Moscow Region. The main theme of the event was Global Challenges, Local Remedies. As usual, the forum brought together from all over the world, business leaders, investment managers and consultants, as well as international experts in the field of the economy and finance.

The epidemiological situation in the country – the spread of the coronavirus – is affecting businesses, especially small and medium-sized companies involved in retail, transportation and consumer services.

Despite the complicated epidemiological situation, Putin has asked business owners and managers to be socially responsible and to comply with all the working conditions of their employees and workers, while the government also fine-tunes measures for supporting companies and businesspeople in the current conditions. These includes both short-term and long-term measures.

“We are focusing on support for small and medium-sized businesses. We have halved the insurance premiums for these companies, from 30 to 15 percent. This is a permanent decision that does not apply to the current crisis period alone. Small and medium-sized businesses working in the affected sectors can delay tax and insurance premium payments for the first quarter of 2020 by up to six months,” Putin told the gathering.

As these enterprises continue to face problems, the government has decided to extend the moratorium for planned inspections of small businesses until the end of 2021. This becomes necessary to reduce the administrative and tax burdens for tens of thousands of companies employing millions of Russian citizens, thus preserving jobs and people’s incomes.

Despite the difficult year, Russia has maintained macroeconomic stability, prevented an inflation hike and ensured financial market stability. This is a solid basis for taking further steps to consolidate the efforts of the state and the business community, overcome the decline, restore employment and bring the national economy back to the growth trajectory.

“We intend to act and are already taking measures in such key spheres as stimulating investment, promoting exports and ensuring a broad-based introduction of digital technologies. These factors can definitely set the trend for long-term quality growth. I would like to emphasize that joint coordinated action is especially important, when government measures to develop the infrastructure, improve legislation and provide direct support to economic sectors are complemented with business investment in the creation of new, modern and highly paid jobs. Only in this case will we see a combined effect and a real result for the entire economy and for the welfare of the people,” according to the president.

He reiterated that stimulating investment is a priority at the current moment, bearing in mind the goal of long-term future-oriented economic development, and pointed out that reliable and safe mechanisms for investing in new financial instruments are available to both Russian and international investors. The government values every partner who wants to work together with Russia.

That digital transformation is one of Russia’s national goals in the coming decade. It is an extremely important condition for enhancing economic growth and improving the quality of life for the people.

Russia’s leading companies have long been and very successfully investing in these spheres, spreading to new niches and products and actually growing into what is now described as “econsystems” and the development of competition in this sphere will give a powerful impetus to the economy and will help many small and medium-sized companies expand their marketing channels.

During the Q&A session, Putin emphasized that the Government of the Russian Federation has taken a considerable package of measures to support small and medium-size companies, include subsidized loans and grants for maintaining the number of jobs and delayed tax payments, and limiting excessive pressure from administrative bodies. The government has proposed extending the term for cancelling inspections for a fairly long period, for next year.

“We see that generally, as I have said, we are acting effectively, but at the same time, we know that these support measures do not reach every company for many reasons. We are perfectly aware of the fact that today businesses in the food services and other services continue to be in a fairly complicated situation. We will certainly respond to this, just as we did to the situation in large companies, for that matter,” he said with high assurance while adding that small businesses, however, are definitely in the spotlight providing employment to about 20 million people, which is a big number in Russia.

Nevertheless, the small and medium-sized business segment, above all in the high-tech area, is extremely important. There was a suggestion that major companies to generate the need for and establishment of an entire cluster of start-ups around them consisting of small and medium-sized businesses. It is important to create conditions to generate the need for the products and services – this is what is important.

In an earlier videoconference, during the final plenary session of the 17th Annual Meeting of the Valdai International Discussion Club, Putin gave the state of the economy.

“We took a number of serious steps to support the economy. This support amounted to 4.5 percent of the GDP. Some other countries allocated even more funds for this purpose. The point is actually not so much the amount of allocated funds but their effective use. We disposed of these funds quite effectively, in a selective way and using the considerable resources accumulated in the past years, as well as relying on the macroeconomic indicators and all other positive achievements of the past years, to support small and medium-sized businesses, and even large companies and the whole industries,” he explained in his speech to this gathering.

What is needed is to adjust support for certain sectors, for example, for small and medium-sized businesses. Certain parts of this work require additional support, maybe the extension of tax benefits and some other measures that are due to expire shortly, and will get through this difficult period together, with the people’s support and trust.

Putin stressed that technology, of course, online education, telemedicine and other advanced solutions – all the modern digital technologies that have been increasingly penetrating all spheres, forcing politicians, legal professionals, and administrative regulators, to move towards decision-making at a faster pace than they used to. This is definitely changing the world.

Everything we are discussing today will soon become the responsibility of young people. Young people will have to deal with all of the problems discussed today. Speaking about Russia, its young citizens, who are still growing up and gaining experience, will have to do this in the 21st century. They are the ones who will have to confront new and probably even more difficult challenges.

They have their own views on the past, present and future, – that Russian people will always retain their best qualities: patriotism, fortitude, creativity, hard work, team spirit and the capacity to surprise the world by finding solutions to the most difficult and even seemingly insoluble problems. Worthy to note that Vladimir Putin’s role, indeed and in practical terms, to remain in the history of Russia has something completely different – ensuring the interests of the Russian people, the Russian state, strengthening Russia.