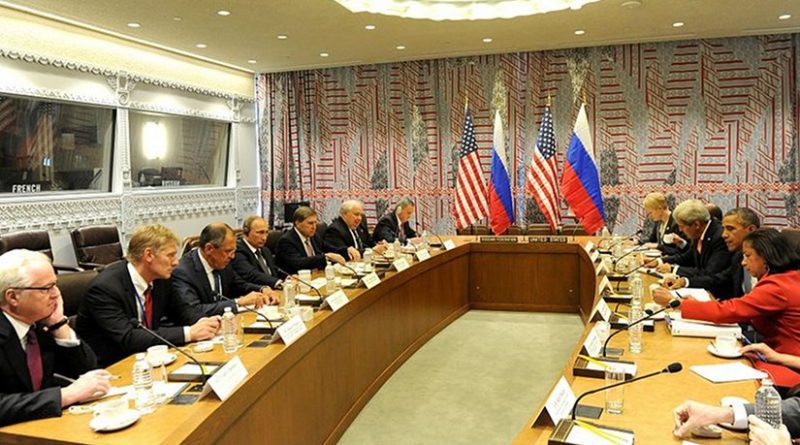 Russia’s military operations in Syria have triggered many discussions about the main goals and motivations of Russia in the region and its effects on the regional political-security equations, as well as on Iran’s national security and interests. I would like today to discuss this issue through a single methodology using both optimistic and pessimistic approaches.

Regarding the goals and motivations of Russia, there are two pessimistic and optimistic viewpoints. The pessimistic perspective argues that Russia’s goals should be viewed more on an aggressive context, characterized by three main considerations: First, Russia’s geopolitical interests. This view argues that Russia has entered Syria’s equations in a bid to maintain its own position along the Mediterranean shores, an entry gate to Russia’s Black Sea ports. This area is also where Syria’s Tartus port which is important for its refueling, overhaul and logistics facilities is located. Russia’s air base in Latakia is also located nearby. Second, is to elevate Russia’s global standing and that Russia is actually trying to boost its global power and wants to maintain the balance of power with the West, especially the United States, with regard to other issues including the crisis in Ukraine. Third, is the character of Russian President Vladimir Putin himself, which stems from a historical legacy and that he is trying to build a global empire.

These arguments are part of the pessimistic and aggressive approach to reasons behind Russia’s presence in Syria. In reality nobody in the world and Iran wants to see Russia in this position.

There is, however, the opposite optimistic view which argues that the Russian goals should be considered in a defensive context. The main argument here is that Russia has actually intervened in Syria in order to protect its national interests and security. This view has also three dimensions: First, Russia’s intervention is aimed at fighting a form of terrorism, which can spill over into Russia as well. That is, Russia is currently fighting terrorists that have come from Chechnya, the Caucasus, and Central Asia to Syria, and so is trying to fight them in Syria instead of its own soil. Second, Russia is really trying to highlight the issue of fighting against terrorism for the international community as a global issue. In this context, Russia is genuinely preventing the regional threats which can endanger the global security. Third, Russia is naturally defending its allies, that is, Syria, and even Iran. Perhaps, this latter point has not been adequately explained inside our country that Russia is concerned about both Iran and Iraq.

At any rate, from a policymaking angle, it is very important to accurately understand if Russia’s perspective is more defensive or aggressive. If we believe more in an aggressive approach, then Russia’s military presence in Syria would naturally seem unacceptable. However, if we consider it more in a defensive context, then this intervention would seem more legitimate.

However, as for the impact of Russia’s presence in Syria on the region’s political-security equations, again this matter can be evaluated through pessimistic and optimistic approaches. Here again three considerations are significant: First, some believe that Russia’s presence in Syria would lead to further spread of terrorism and extremism in the country thus the region. This is mostly a Western viewpoint, which argues that this military presence would only weaken the position of the moderate oppositions inevitably pushing its members toward the Takfiri extremists such as Daesh and Al-Nusra. Second, this military presence will widen the regional geopolitical rivalries between Saudi Arabia, Turkey and Iran. In this context, this presence will tilt the regional balance in favor of Iran and to the detriment of Saudi Arabia and Turkey thus prompting them to show a more robust reaction. Third, this intervention will spread the Cold War kind rivalries across the world, something that has already appeared between Russia and the West. This approach of looking into the issue on the whole believes that Russia’s military presence in Syria will not bring any positive effects on the region’s political-security equations.

In contrast, there is an optimistic approach to which Russia’s military presence in Syria can have positive effects in a number of areas: First, it will accelerate the process of finding a political solution to the Syrian crisis at the level of regional and international equations. The United States secretary of State John Kerry already believes that perhaps this presence would be an opportunity to open a new political atmosphere in this crisis. Second, Russia’s presence in Syria prevents the disintegration of the country by bolstering the Syrian government. Third, it shores up multilateralism, finally leading to the presence of all regional and transregional actors, especially Iran, in the Syrian peace talks.

Last and most important is the effects of Russia’s presence in Syria on Iran’s national security interests. This aspect can also be discussed through this optimistic and pessimistic methodology. From a pessimist approach, there are three negative spinoffs to this presence: First, the Russians are trying to balance Iran’s role in the Levant area. This view is more echoed by the Arab world analysts. Second, which is based on a negative historical view towards the role played by the Russians in the contemporary history, maintains that the Russians only seek to protect their interests and if they reach an agreement with the United States, they will easily ignore Iran’s interests. In other words and from this perspective, the Russians are not a reliable partner at the international level. Third, the intense presence of Russia in Syria will marginalize and weaken Iran’s political role in the Syrian crisis and this situation will not be to Iran’s benefit in the course of future political transition in Syria. For example, Russia may reach an agreement with the United States about the need for removing the Syrian President Bashar al-Assad from power.

Yet, there is also a positive viewpoint about the effects of Russia’s military presence in Syria on Iran’s national security and interests. First, this presence will expedite a political solution and this has been the main aim of Iran in the course of the Syria crisis. Second, with the Russian presence, the Syria crisis, along with its domestic and regional dimensions, will turn into an international dimension, and this will be beneficial to Iran, whose priority is to fight terrorism across the region. In this way, Iran will be able to play a more pronounced role in the Vienna conference on the situation in Syria as the Russians are pushing for Iran’s meaningful presence in these talks. Third and most importantly, Russia’s presence in Syria will increase the value of partnership with Iran for the Western countries. In this context, the Western countries are likely to become more concerned about Russia’s increasing regional role and this might lead to get closer to Iran. Here, Iran’s independent role will be more attractive to Western countries.

Last but not least is the changing nature of the Iran-Russia relations in the light of the above-mentioned equations. Its seems that the two countries have now gone beyond their historically passive understanding to each other’s roles and stances in the region, focusing more on preserving their common geopolitical and strategic interests.

*Kayhan Barzegar is the director of the Institute for Middle East Strategic Studies in Tehran and a former research fellow at Harvard University. He also chairs the Department of Political Science and International Relations at the Islamic Azad University in Tehran.

The text of Dr. Kayhan Barzegar’s presentation in the Institute for Middle East Strategic Studies (IMESS) and Iranian Political Science Association (IPSA)’s joint seminar on “The Effects of Russian Presence in Syria on the Regional Equations and Iran’s Interests,” held on November 15, 2015