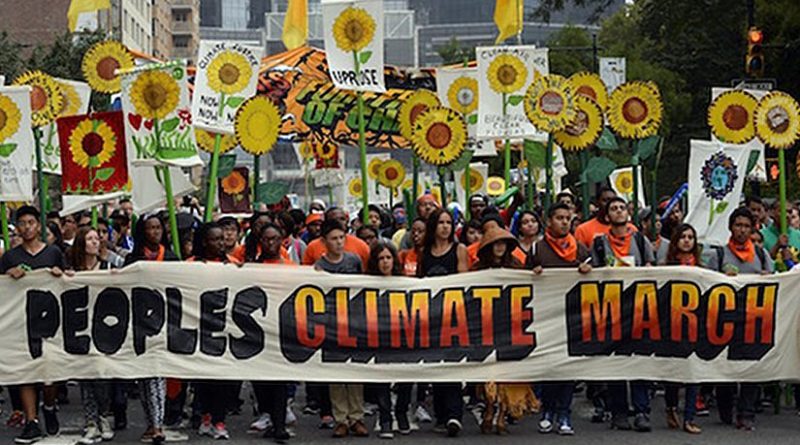 Leaders from the U.S. and Canadian grassroots and indigenous communities have expressed their opposition to the proposed global climate agreement, saying that it falls far short of what is needed to avoid a global catastrophe.

With more than 100 delegates from dozens of climate impacted communities across the U.S. and Canada, the It Takes Roots delegation is calling on world leaders to emerge from COP21 in Paris with an agreement based on real solutions. COP21 is the 21st session of the UN Framework Convention on Climate Change from November 30 to December 11, 2015.

“Climate catastrophes are a reality right now. But the COP21 is not based on that reality, only on what is politically expedient. The agreement is based on a carbon market that allows developed countries to continue to emit dangerously high levels of greenhouse gasses through shell games, imaginary techno-fixes, and trading schemes that result in land grabs and human rights violations,” said Alberto Salamando, a human rights expert with the Indigenous Environmental Network.

“The UNFCCC process has been hijacked by the fossil fuel industry, which is seeking to expand pollution markets and privatize and sell everything from our air to the algae in our water. From cap and trade in California, to the carbon trading requirements of the Clean Power Plan, the U.S. is aligning other member states around false solutions instead of holding steadfast to renewable energy and other genuine sustainable solutions,” said Kali Akuno from Cooperation Jackson in Mississippi.

“Our delegation is more than 25 years in the making. From the People of Color Environmental Justice Summit, through the Kyoto Accords, and the entire COP process, we have been the voice of urgency and clarity at every turn, because protecting our communities, our families and the planet has been our only true interest. We know, just as these negotiators do, that real reductions require a fundamental shift from the extractive economy and stopping climate pollution at the source,” said Jose Bravo of the Just Transition Alliance.

“Members of our delegation include a young person from Alaska whose community will be evacuated in the next ten years because of sea level rise. They are mothers and children living alongside fracking wells, coal mines, and oil refineries. We don’t have the luxury of pretending that pollution trading works when we know that it is a hoax. The climate movement as a whole is growing in alignment that our survival requires the kind of leadership and strategies that come from the grassroots,” said Cindy Wiesner, National Coordinator of Grassroots Global Justice Alliance.

“We see through this latest attempt by world leaders to escape responsibility.  If the Obama administration is serious about climate change they also have to be serious about the changes they are willing to make. Those changes will not be easy, but going the easy way and conceding to fossil fuel interests is what got us to this crisis in the first place. Coming into an international negotiation looking to avoid negotiations and responsibility is not ok.  It’s time to change and stand with the people, not the polluters,” said Kandi Mosset from the Indigenous Environmental Network

Meanwhile, reacting to the statements of President Obama, President Hollande and other world leaders at the Paris climate talks, Jagoda Munic, Friends of the Earth International chairperson said: “President Obama called for a low carbon future, but the people urgently need a low carbon present – and it could be within reach if politicians would listen to the people.”

“World leaders today stated that the climate crisis is upon us and that the poorest countries are the least responsible for it. Yet the richest nations are not committing to what is actually needed to avert irreversible climate change and protect people from the impacts of the climate crisis,” Munic said.

He added: “So far, the emissions reductions tabled by developed countries are not anywhere near their fair share. They must urgently commit to reduce their emissions to prevent dangerous global warming.”

Munic said fossil fuels had helped developed nations obtain the unequal position of power they hold today. “These countries must take responsibility for creating the climate crisis, for using up more than their fair share of atmospheric space and for continuing on a fossil fuel development pathway.”

He added: “Around the world, people are creating the real solutions to the climate crisis. They include steep reductions in carbon emissions, stopping fossil fuels, building clean, sustainable, socially-owned energy solutions, transforming our food systems, and stopping deforestation.”

Florent Compain, President of Friends of the Earth France, said: “President Hollande stated that he wants an ambitious and equitable climate agreement. But how can France lead if it cannot reign in its polluters? Companies like Engie and EDF, in which the French state is a shareholder, still refuse to close their 46 dirty coal plants. This must change urgently, we need climate justice now.”