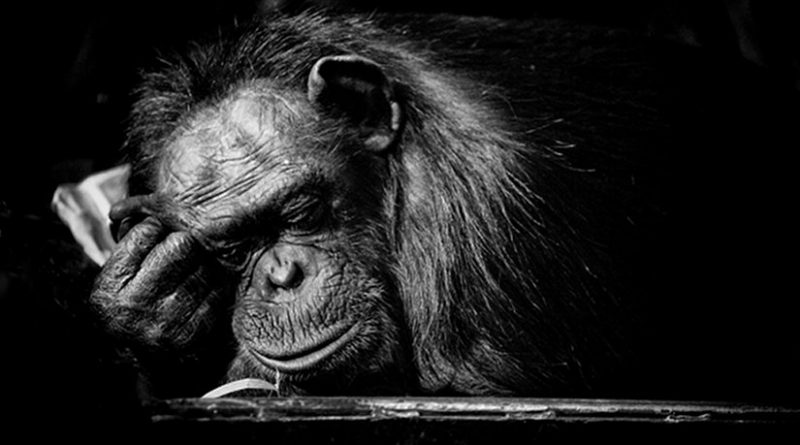 To date little is known about how humans and chimpanzees process information about faces and buttocks. The key question that Kret explored was whether chimpanzees process rear ends just as efficiently as we process faces. This does appear to be the case. The findings can be found in PLOS ONE.

Like the face in humans, chimpanzees derive important information about identity, attractiveness and health from the buttocks. When females are in their monthly fertile period, the parts around their behinds dilate and become dark pink in color. For chimpanzees, the buttocks are therefore very important in recognizing one another at a single glance.

Recognizing a person at a glance translates in psychology to the well-known ‘face inversion effect’ (see image).

Faces are recognized by the brain faster than other objects, but this does not apply if the faces are inverted. When people see an object in a photo, for example a house, they recognize it just as rapidly (or slowly) whether or not the object is inverted.

Kret discovered that there is also a buttocks inversion effect in chimpanzees.

“This is a good indication that this category has priority over other categories of objects,” according to Kret.

The study with apes took place in a primate institute in Japan where Kret worked for almost a year.

Shortcut in the brain

As has been shown previously, humans recognize faces in an upright position faster than in an inverted position. The human test candidates recognized the buttocks just as quickly whether the photos were upright or inverted.

Kret explained: “We see faces so often and almost always upright that our brains have created a shortcut so that this category of images is recognized more efficiently and faster, but this only works if they are upright.”

It makes no difference for buttocks; we recognize them equally quickly regardless of whether they are upright or inverted.

Why is this knowledge important? This research provides a fundamental insight into the underlying mechanisms of how we recognize one another and how that may have changed in the course of evolution, Kret said.

“Faces are enormously important for people, and all the features of our faces are optimally arranged to be seen and to communicate. In the course of evolution, our faces have acquired more contrast: red lips, the whites of our eyes, eyebrows and a smooth skin that makes everything more visible,” Kret said.

In humans, concealing women’s fertile period has the advantage that women can be attractive to men all of the time and can form close bonds, creating pairs, Kret explained. Not only this, through evolution women have acquired permanent, relatively large breasts that have some similarity to buttocks.

According to Kret, “It is not without reason that it’s the face and buttocks of female primates that are free of hair, which makes the skin and color all the more visible.”

Primates’ eyes are perfectly set to distinguishing red tints. That’s why not only emotional expressions, such as blushing when we are angry or shy, become more visible, but also sexual arousal. It also explains why the buttocks of female chimpanzees are red.

“That may not apply to humans, but it does explain why women use lipstick and blusher.”

Home » Chimpanzees Recognize Each Other From Their Rear Ends