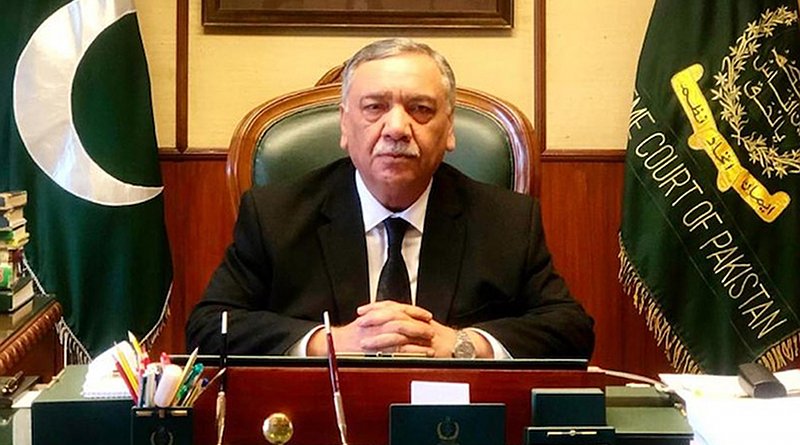 The Supreme Court of Pakistan on November 28 limited the three years extension in the term of Army Chief of Staff General (COAS) Qamar Javed Bajwa to six month.

A three-member court bench led by the Chief Justice Asif Saeed Khan Khosa, who retires in less than one month, on November 27 suspended Prime Minister Imran Khan’s August 2019 order to extend the term of General Bajwa to three years.

Previously, the terms of several army chiefs, have been extended, but this is the first time the Supreme Court has suspended the move.

A three-judge bench of the apex court – headed by Chief Justice Asif Saeed Khosa – on November 26 took up an application seeking withdrawal of a petition against the extension/reappointment of the army chief.

The application was submitted by The Jurist Foundation (an unknown group) which had challenged General Bajwa’s reappointment through a controversial attorney Riaz Hanif Rahi, requesting the apex court to declare it null and void, and illegal.

When the court assembled on November 26, a hand-written application from the petitioner was submitted before the bench, seeking withdrawal of his petition. The chief justice remarked that the application was not accompanied by any affidavit and it was not known if the withdrawal of the petition was voluntarily.

Chief Justice Khosa rejected the application and took up the petition under Article 184 (3) of the Constitution as it involved a question of “public importance”. The court issued notices to the federal government, the defence ministry, and Gen Qamar and adjourned the hearing until Wednesday.

Gen Qamar was due to retire on November 29. According to a statement issued by the Prime Minister’s office on November 21, the notification for Gen Qamar’s reappointment was issued on August 19, which said that he would continue to serve as COAS until November 2022.

All this drama began on November 18, when Prime Minister Imran Khan asked Chief Justice of Pakistan Asif Saeed Khosa and senior judge of the Supreme Court Justice Gulzar Ahmed to come forward and restore public confidence in the judiciary.

He said there was a perceived disparity in how the powerful and common people were treated in the country’s judicial system. He said he was ready to support the judiciary to change the perception and restore public confidence in the institutions.

Two days later on November 20, Chief Justice of Pakistan Asif Saeed Khosa made a scathing rejoinder advising Imran Khan not to “taunt the judiciary” in any way.

He implied that before 2009 judiciary was not independent when he said the judiciary is independent as a result of the 2009 lawyers’ movement, and working in accordance with the law and the Constitution.

He recalled that the post-2009 judiciary was the one which had convicted one prime minster [Yousuf Raza Gilani] and disqualified another [Nawaz Sharif] and was soon going to decide the high treason case against a former army chief [General Pervez Musharraf].

Justice Khosa acknowledged that in the past there was a perception that courts were only hearing cases of the powerful people while cases of the weak were not taken up. However, he added, presenting around 3,100 judges and judicial magistrates in the country had decided 3.6 million cases.

During his 11-month term as the top judge of Pakistan, Chief Justice Asif Saeed Khosa has not taken any suo motu notice. It is the first-ever suo motu notice when he rejected the application to withdraw petition challenging the extension tenure of General Qamar Javed Bajwa as the Chief of Army Staff.

Justice Khosa said if the Supreme Court interfered in a case on day one, the whole process of justice would be retarded. He said he handled some cases in which the apex court had taken suo motu notice years ago, followed by certain directions but later it transpired at the stage of appeal that the facts of the case were entirely different.

This is the first time that Justice Khosa, who was sworn in as the topmost judge on Janusary 20 this year, has exercised powers under Article 184(3) [suo motu authority] just 24 days before his retirement.

The order issued by the three-member bench headed by Justice Khosa said that the court-associate has produced before it a handwritten application statedly submitted by the petitioner [Riaz Hanif Rahi, advocate] seeking permission to withdraw this petition. The petitioner has failed to appear in person and not anybody else appeared on his behalf. The application received does not carry any date and the same is not accompanied by any affidavit.

During Justice Khosa’s incumbency, there were a number of vociferous public calls to take suo motu notice of various grave incidents that caused immense nationwide uproar but he resisted. He was also repeatedly requested to intervene when the Sahiwal massacre took place.

It will not be too much to say that the Supreme Court Chief Justice Khosa’s solo-suo motu to take up the issue of extension of General Bajwa’s tenure was not less than settling scores with Prime Minister Imran Khan who enjoys  backing of Pakistan armed forces.

The Supreme Court of Pakistan on November 28 asked the parliament to legislate on the extension/reappointment of an Army chief. The court ruled that the current appointment of General Qamar Javed Bajwa as COAS shall be subject to the said legislation and shall continue for a period of six months from today, where after the new legislation shall determine his tenure and other terms and conditions of service.

The Supreme Court has not only embarrassed the government of Imran Khan but also undermined the position of General Bajwa as the Chief of Army Staff.

* Abdus Sattar Ghazali is the Chief Editor of the Journal of America, which first published this article. He can be contacted at [email protected]