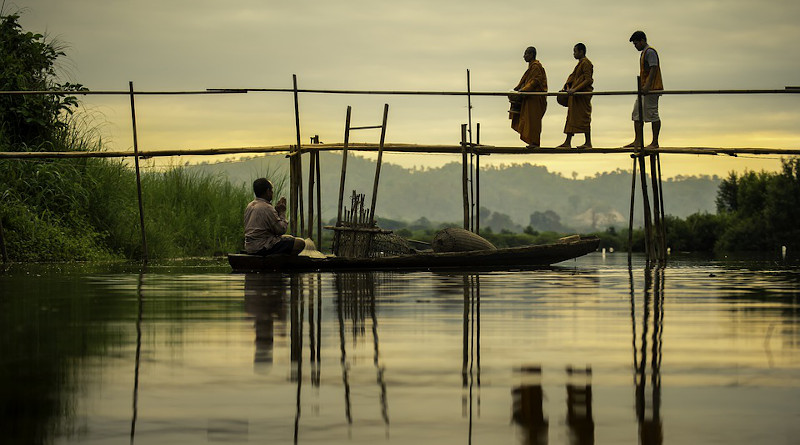 A senior Buddhist monk has been arrested in a central Thai province after he was found to be involved in drug trafficking.

The clergyman was apprehended late last week at a resort when during a search police discovered 4.8 million methamphetamine pills in a minivan used by the monk and his accomplices.

The luggage area was packed with cardboard boxes containing the illicit narcotics and officials also found a handgun with 14 bullets.

The monk, who is from the northern province of Chiang Rai, reportedly told police he had agreed to serve as a courier for drug dealers because he was paid 300,000 baht (US$10,000) per delivery.

He said he had already done deliveries twice before and he needed the money for his studies.

The monk’s role was to sit in the van as the drugs were delivered from one area of Thailand to another so as to deflect attention from the contents of the vehicle at police checkpoints.

Buddhist monks are accorded a great deal of respect in Thailand and are rarely bothered by the authorities. However, local authorities had been investigating a major drug-trafficking network in the area and had been tracing their activities.

Buddhist monks are forbidden by the tenets of their faith from taking or dealing in any sort of intoxicants. However, some wayward members of the Sangha, the community of monks in the predominantly Buddhist nation, have been caught in possession of narcotics in recent years.

In 2018, a monk at a temple in the northeastern province of Kalasin was found to be taking drugs along with other monks in their living quarters.

The clergyman was charged with being a major drug dealer who had entered the monkhood to disguise his criminal activities. He was disrobed and expelled from his monastery.

“The suspect enjoys a luxury lifestyle, with over 10 million baht circulating in his bank accounts,” a police official said at the time. “He drove his BMW to deliver speed pills and crystal meth to his clients, mostly nightclubbers.”

In 2017, a 35-year-old monk was defrocked after he was discovered to be in possession of speed pills during a tryst with a 19-year-old woman in a love motel on Valentine’s Day.

The monk, who was in his saffron-colored robes, had been spotted entering the motel at night and officials decided to see what he was doing there.

He tested positive for narcotics and was subsequently expelled from the monkhood.

He told police he had sneaked out of his temple to meet the young woman with whom he had been communicating via telephone to celebrate Valentine’s Day.