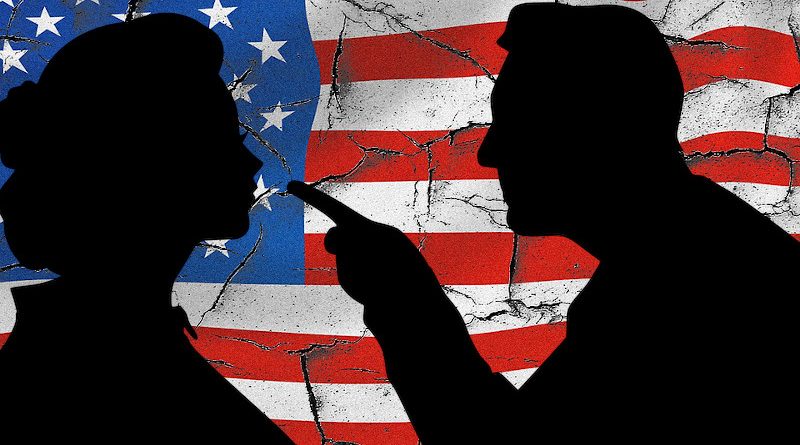 The 2020 election was a roller coaster experience for both sides and for all International observers who understood its massive economic and geopolitical implications for the rest of the West. There was no shortage of drama, sensationalism, half-truths and full untruths at every stage of the process, from the Democratic primaries right to this day, with politicians and partisan journalists painting their own version of reality, fueling divisions and rallying their fanatical followers to express their outrage at every turn.

Given the extraordinarily toxic internal tensions in the country that managed to leak out and spread in Europe too, one of the big questions that has been dominating debates and projections over the last couple of months was over the impact of a Biden presidency on the ongoing social unrest in the US. Democrat supporters, left-leaning ideologues and mere optimists in general seemed to take it for granted that the change of guard at the White House would serve to heal past wounds, to unite the people and to help the country move forward. As Mr. Biden emotionally highlighted in his victory speech, directly copying one of Barrack Obama’s most famous lines, “I pledge to be a president who seeks not to divide, but to unify; who doesn’t see red states and blue states, only sees the United States.” This hope of an imminent nationwide “mending of fences” was widely shared by many people in other Western nations too, expecting that this spirit of unity in the US might also be imported to their own counties and help extinguish the locally raging social and political fires.

Heartwarming and encouraging as that vision might be, the delightful words of the Biden camp don’t seem to match the actions taken already by prominent party figures and affiliates. They convey an entirely different sentiment, somewhat less conciliatory and rather more vengeful and spiteful. Here’s a great example: Soon after media platforms called the election for Mr. Biden, popular millennial Rep. Alexandria Ocasio-Cortez urged her loyal followers to create an archive of online posts by Trump supporters, so that they won’t be able “to downplay or deny their complicity in the future”. Robert Reich, former Labor Secretary and advisor to Presidents Clinton and Obama, called for a “Truth and Reconciliation Commission”, that would “name every official, politician, executive, and media mogul whose greed and cowardice enabled this catastrophe.”

The identity politics saga is set to continue and that’s a scenario well supported by the Biden/Harris official manifesto too. A lot, if not all, of their promised policies are either geared towards or directly and explicitly aimed at state interventions to massively redistribute wealth and resources from one group to another, based on the sort of divisive rhetoric and victimological theories we’ve been hearing more and more of over the last few years. Nowhere is merit mentioned or even acknowledged as a concept worth factoring into fiscal and social policy.

Of course, this policy direction is all but certain to backfire and will likely only serve to heighten the existing social tensions and the hostility within the population. However, grave as the social consequences will be, it is the economic aspect of these approaches that is even more worrying. It can be argued that the gigantic problems that reckless government spading creates and the ticking time bomb that is the national debt could not be expected to be meaningfully dealt with under either candidate. After all, if there’s anything Trump and Biden could agree on, it’s that trillion-dollar government checks are really great for the economy and everyone should get one. Nevertheless, the ideology that the new leftism of the Democratic Party brings to the table does provide some very popular justifications and the right tools for such a debt explosion. Not only is it the government’s job and its solemn duty to print checks for everyone, but it is also economically sound to do so: MMT assures us, after all, that “deficits don’t matter” and that it is physically impossible for the state to go bankrupt. In other words, not only can you print and spend your way to economic destruction and monetary annihilation, but you can also feel great and totally confident while you do so.

There’s also another highly consequential element that comes with this sort of political approach. The change of guard at the White House has some serious geopolitical implications, chief among them being the regression back to the way things were before Trump, back to the idea of supranational centralization and strengthening the institutional power of international bodies and organizations. This pushing aside of the individual voter and the silencing of the individual taxpayer in favor of top-down governance, largely by unelected bureaucrats, would be deeply lamentable under any circumstances. But it is infinitely more dangerous now, in the midst of the covid crisis.

Politicians on all levels and of all stripes always hate to let a good crisis go to waste and even under normal conditions they like to use all kinds threats and problems, real or invented, to expand their reach and power. Given the scale of this particular crisis and international nature of it, this tendency to hand over essential decisions to some central authority, far removed from the realities of the average citizen, has the makings of a real political, social and economic disaster. Not only is it spectacularly inefficient, as we saw during the “first wave” of the virus, both in the EU and in the US, as the “central” response was egregiously botched, but it also opens a wide window for serious abuses.

Economically, we already saw the kind of damage it is capable of. Shutting down the global economy, putting millions of people out of a job, creating financial desperation in countless households, all virtually overnight and with unbelievable ease, was arguably just the beginning. As we saw from the recent G-20, from publications of the World Economic Forum, the IMF, the World Health Organization and all kinds of other international bodies, now the emphasis is on printing, spending and pretending this can go on forever.

As far as political and social issues go, the dangers are even clearer. Promising safety in exchange for liberty is the oldest trick in the good politicians’ book, and now we see it being played on a global scale. How many more rights may be “temporarily suspended”, how many new “emergency” rules and regulations will be passed without debate and outside the democratic process, and how many more state intrusions into the citizen’s private life and business might we see in the coming months and years?  Well, I suppose there’s really no limit, as long as people remain captive in this system. But we don’t have to, and this is why I’m personally rather optimistic about what lies ahead.

We have the tools and the means we need to “opt-out”, to any degree that each of us wants and feels comfortable with. The power of the internet, the myriad of new concepts and decentralized technologies and the possibility to eliminate all the inherent risks of remaining financially dependent to fiat currencies are all available to us. The latter is arguably the first, the simplest and most important step. Given the extreme monetary and fiscal manipulations that are already underway, as well as the massive financial repression that is bound to explode in the near future, physical precious metals are essential in reclaiming financial sovereignty.

Home » The Far-Reaching Impact Of The US Election – OpEd