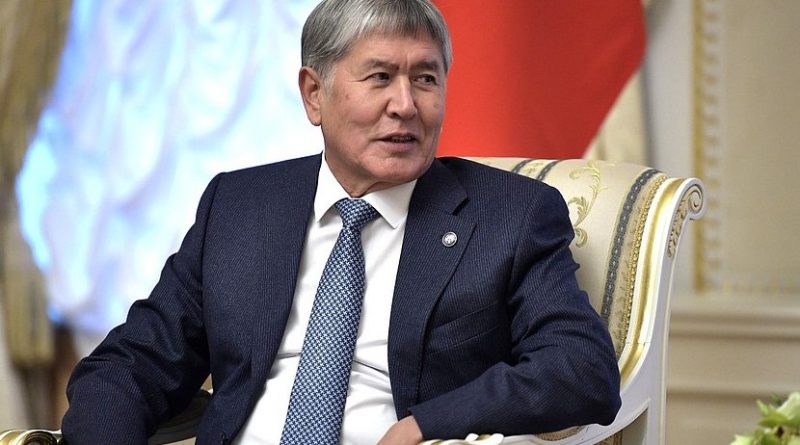 Kyrgyzstan’s former president, Almazbek Atambayev, has made a characteristically pugnacious return to the political bull-ring following his unchallenged coronation this weekend as head of the party he helped create in the 1990s.

With Atambayev back in charge of the Social Democratic Party of Kyrgyzstan, or SDPK, a fresh dose of intrigue has been injected into a scene rendered largely sterile by escalating repression.

Journalists were kept well clear of the closed doors jaw-jawing at the SDPK congress at Bishkek’s Orion Hotel on March 31, but Atambayev made up for the wait with a Q&A heaving with indignation. The assembled press were eager to learn of any signs of disaccord between Atambayev and his successor and would-be ally, President Sooronbai Jeenbekov.

The 61-year old didn’t disappoint and cast himself as the sage elder to an inept acolyte.

“I am two years older than him. Like an older brother, I have to tell him things — often unpleasant things — that few people can say to the president of Kyrgyzstan,” Atambayev said.

Atambayev said that he and Jeenbekov spoke recently for four-and-a-half hours, but insisted that salacious rumors the pair had come to blows during one of their encounters were quite untrue.

This is an unusual moment for Kyrgyz politics. There can be little doubt that Jeenbekov owes his presidency to Atambayev, who only left his throne because he was required to do so after having served one six-year term. Atambayev first implicitly anointed Jeenbekov as his successor and then participated actively in smearing the only other viable candidate, wealthy business Omurbek Babanov.

Since his swearing-in in November, however, Jeenbekov has begun assembling his own power base, igniting talk of schisms.

Not that any of this should have been on the cards. In the twilight of his presidency, Atambayev would speak dreamily of riding off into the sunset and taking up playing the piano again. He then changed his mind, surprising almost nobody, and announced he would return to the SDPK and lead it into battle at the next parliamentary elections, currently slated for 2020.

There are some mercantile motivations at play here. Control over the SDPK will give Atambayev effective control over the party lists ahead of national and provincial elections. In Kyrgyzstan’s business-driven politics, the formation of party lists is said to be a lucrative affair.

And this may all set up a parliament-versus-president’s office dynamic that the country has not seen for a while. Atambayev is already making it clear he wants a say in running the show.

“I’m telling him: ‘Look at who you have got working at the Security Council.” I got Temir Jumakadyrov [to head the council] and he brought in serious people. Now they have all left, and [their replacements] just check whether or not security officials are wearing uniforms,” he seethed.

This is obviously sublimated rage at something altogether different.

Jeenbekov spoke at a February 8 meeting of the Security Council on the need to pick up the battle against corruption and grumbled that judicial reforms had fallen flat. He was particularly critical of the General Prosecutor’s Office and the anti-corruption department of the State Committee for National Security, or GKNB, the successor agency of the KGB. Both those bodies were, as it happens, regularly deployed to take down Atambayev’s political antagonists. The Security Council meeting prompted one commentator to suggest Jeenbekov had declared “war on the Atambayev clan.”

In an apparent response, Atambayev offered dark talk of people in Jeenbekov’s office trying to plot a return to a strongman presidential system.

“We’ve been through too much as a country to return to authoritarianism,” he opined, more than a little disingenuously.

In the event of any clash, Atambayev still has strong cards to play. Both the GKNB and the Interior Ministry are led by cronies.

To add to suspicions of mounting intra-party breaches, one of the multiple absences at the SDPK congress included Jeenbekov’s brother, Asylbek Jeenbekov, a bigwig in parliament. Atambayev pooh-poohed talk of differences with this junior Jeenbekov, but nonetheless suggested it might be better if he relinquished his seat in parliament. Retaining the seat would be improper, argued Atambayev, an unfortunate throwback to the family clan-style rule that predominated before the 2010 revolution.

Several delegates did storm out of the congress in strong disgust at Atambayev’s comments on Jeenbekov, the MP, but anybody hoping for outright fighting within the ranks should probably temper expectations.

The new president, unlike Atambayev, is a taciturn type ill-disposed to public confrontations. As gossip swirled ahead of the serially postponed party congress, Jeenbekov said little, but made a point of reassuring the public that there would be no clan rule in Kyrgyzstan. He also said that neither he nor his brother have any plans to form a new political party. On April 2, a spokesman for Jeenbekov brushed off Atambayev’s remarks as “emotional.”

But could an increasingly obstreperous Atambayev prompt a change of heart?