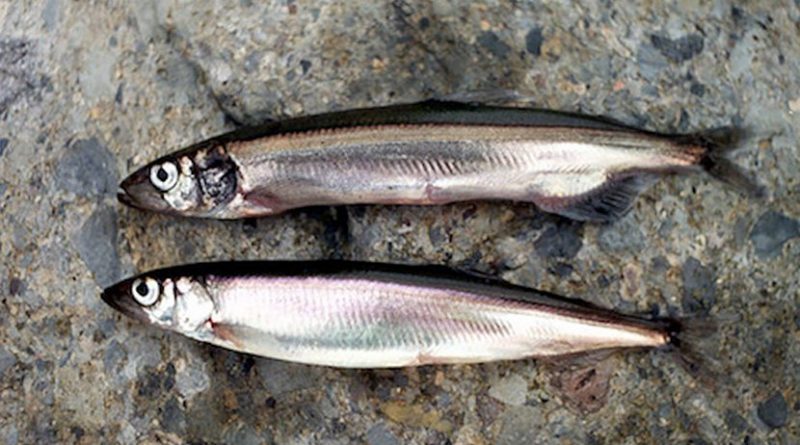 After five research expeditions in search of capelin, Iceland’s Marine and Freshwater Research Institute (IMFRI) has decided not to recommend a quota for it this year, arguing that global warming is probably responsible for the lack of the fish.

According to Thorsteinn Sigurdsson, head of the Pelagic Division at the institute, capelin (Mallotus villosus) is a cold-water fish and mostly chooses to be at a marine temperature between 1-3°C. “Concomitant with ocean warming north of Iceland before the turn of the century, changes started to appear in the distribution of capelin off Iceland and instead of being spread out to the north of Iceland and the West Fjords, it was mostly found off the east coast of Greenland,” he said.

“It is handy to lay the blame on the environmental changes that have occurred since the late 1990s. Conceivably, this may have had a negative effect on recruitment to the stock, which subsequently led to the fishable stock of capelin in recent years being far below what it was during the 1980s and 1990s,” Sigurdsson added.

Over the last 20 years or so, “ocean temperatures around Iceland have been markedly increasing”, said Dr Olafur S. Astthorsson from IMFRI, who was responsible for compiling the chapter on marine ecosystems that was part of a comprehensive study on the effect of climate change on Iceland.

Admittedly, sea temperatures have decreased slightly since 2015, “but they are still higher than pre-2000”, he noted, adding that “sea temperatures in frontal waters such as around Iceland may fluctuate from year to year and over longer periods. We don’t know whether this decrease now is just a one-off year or an indication of a colder possible period.”

Capelin moves around in huge shoals, but can be elusive to find. Nevertheless, with the exception of 2009-2011 and 2014, the small pelagic fish has been extremely important in terms of marine export revenue, second only to cod. Using figures retrieved from Statistics Iceland, economist Fridrik Thor Gunnarsson from the lobby group Fisheries Iceland says that capelin usually represents 6-12 percent of marine export value.

The municipality of Fjardabyggd received and processed 47 percent of Iceland’s capelin catch in 2018. Comprising seven villages of varying size, the most important fishing villages are Neskaupstadur, Eskifjordur and Faskrudsfjordur. Each village has at least one company that freezes capelin, renders it down to fishmeal and oil, and removes the yellow-covered roe known as masago that is used as a decoration for sushi.

In these villages, life between January and March centres on capelin, and staff work round the clock. The repercussions for Fjardabyggd are expected to be dire because of the lack of capelin.

“Wage income in Fjardabyggd will decline by 5 percent or ISK 1.25 billion [9.4 million euro] in 2019 from the previous year,” said Valgeir Aegir Ingolfsson, Employment and Development Officer for the municipality.

“The salaries of employees in the fisheries sector will decrease by 13 percent from the previous year, based on a slightly changed capelin season between years. The decline in export revenues into the community will be around ISK 10 billion 751.3 million euro. The turnover of companies that are directly connected to the local fishing industry will decrease by close to ISK 600 million [4.5 million].”

Moreover, “[t]he recession will also be felt in other industries in Fjardabyggd” which in turn will affect the attitude of residents and businesses for investment, maintenance and other service purchases, as well as having effects on the real estate market. “The income of the municipalities and the port fund will decrease by ISK 260 million [1.95 million euro] from the budget for the year 2019,” he added.

“This means that various proposed developments in the municipality will probably have to be postponed due to lack of finance,” he pointed out.

The problem is unlikely to be restricted to this year alone. Sigurdsson explained that unlike other fish which spawn off Iceland, capelin dies after spawning. “About 90% of capelin spawn when three years old and about 10 percent when four years old. Thus the majority of the spawning stock is composed of one age group. This means that if spawning, hatching or something else result in the age group being small one year, this is reflected in the spawning stock three years later being poor. We have seen such cases in recent years, which is reflected in decreasing stock,” he said.

Sigurdsson pointed out that the condition of the capelin stock has been poor for most of this century, which is reflected in catches from the stock: “The average catch for the last five years has been less than a third of that which occurred 1980-2000, or about 300,000 tonnes. The maximum catch was 1.6 million tonnes in 1996.”

There has also been increasing ocean acidification around Iceland, which could conceivably have an effect on some aquatic fauna. Asked whether shell-forming invertebrates such as shrimps might be affected, the author of the ocean acidification chapter in the climate change study, emeritus professor Jon Olafsson from the University of Iceland, said: “No, there’s been very little research done on this here. Potentially there might be a general effect on marine organisms which build shells or structures of calcium carbonate, but individual species are not mentioned.”

The IMFRI specialist in Norway lobster (Nephrops norvegicus), Jonas Jonasson, said that stock abundance is estimated to have declined by 20 percent from 2016, and “recruitment has been low since the 2005 year class”. Without reversal, this will lead to a “further decrease in stock size in coming years”. Recruitment refers to the number of five-year-old lobster, as that is the age at which most lobster is caught.

However, when asked whether increasing ocean acidity might be the reason for this, Jonasson said: “We do not consider the reduction in the Norway lobster population to be directly related to ocean acidity.”

Like Olafsson, Jonasson pointed to lack of knowledge in this area: “We know very little about the effect that the future acidification will have on the physiology of many marine organisms and in reality one could say that we’re just beginning to research this segment.”