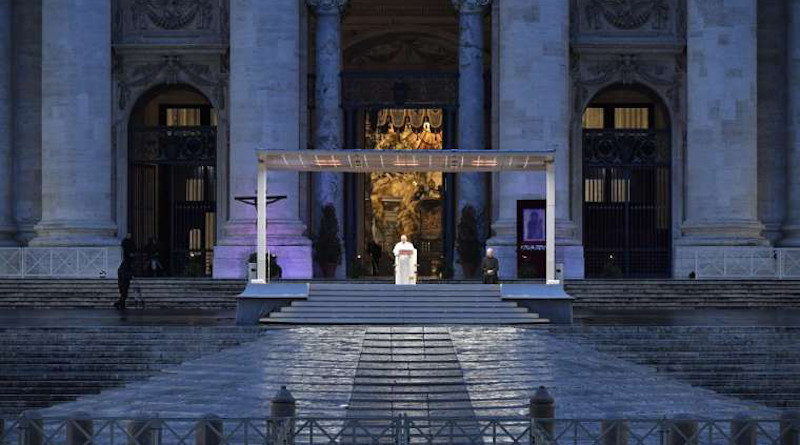 The 16th-century crucifix which was present in St. Peter’s Square for Pope Francis’ Urbi et Orbi blessing last week was reportedly damaged by rain, but the priest in charge of the church where the cross traditionally hangs said it has not been seriously harmed.

Fr. Enrico Maria Casini, who is in charge of San Marcello al Corso in Rome, told CNA April 2 the damage to the miraculous crucifix from rain “is not serious,” from what he understands, and is expected to be returned to the church for Easter.

According to a Vatican source, the crucifix was not as badly damaged as some initially suggested and will be on public display again during the pope’s Palm Sunday Mass in St. Peter’s Basilica April 5, as well as during the pope’s other Holy Week liturgies.

The wooden crucifix was moved from San Marcello al Corso to the Vatican March 25. Pope Francis prayed before the crucifix during his extraordinary Urbi et Orbi blessing in St. Peter’s Square March 27 for an end to the coronavirus pandemic.

During the holy hour and blessing, which was broadcast live, rain could be seen running down Christ’s body on the crucifix.

One Italian report characterized damage to the crucifix as including swollen wood, peeling paint, and eroding plasters.

The crucifix was venerated as miraculous by Romans after it was the only religious image to survive unscathed from a fire that completely gutted San Marcello al Corso May 23, 1519.

Fewer than three years later, Rome was devastated by the “black plague.”

Upon the request of Rome’s Catholics, the crucifix was taken in procession from the convent of the Servants of Mary in Via del Corso to St. Peter’s Square, stopping in each quarter of Rome.

The procession continued 16 days, August 4-20, 1522. When the crucifix was returned to San Marcello, the plague had disappeared from Rome.

The crucifix has since processed to St. Peter’s Square every Roman Holy Year – around every 50 years – and the crucifix has engraved on its back the names of each pope to have witnessed those processions. The last name engraved is that of St. John Paul II, who embraced the crucifix during the “Day of Forgiveness” during the Jubilee Year 2000.

Home » Damage To Miraculous Crucifix During Pope’s Blessing ‘Not Serious’