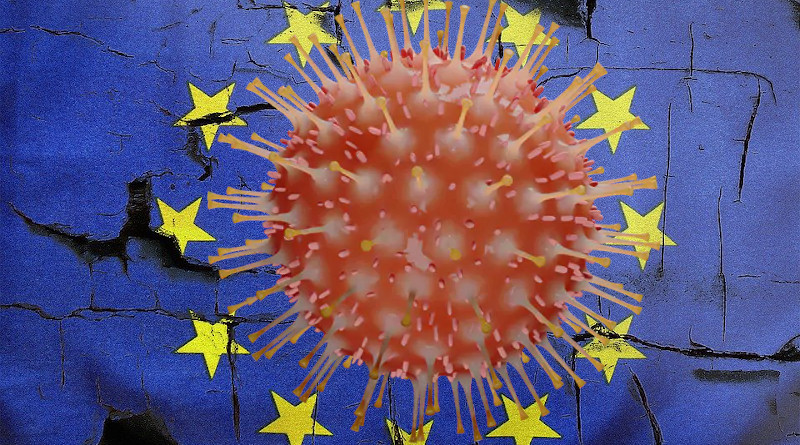 1 Analysis World News
May 3, 2020May 3, 2020 Published by the Foreign Policy Research Institute 0 Comments

(FPRI) — In 2015, Swedish director Ruben Östlund landed a surprise hit with his drama Force Majeure. The plot: A picture-perfect Swedish family lunches on the terrace of a ski-slope restaurant in the French Alps. At a distance, a controlled avalanche is triggered. Suddenly, the avalanche threatens to engulf the restaurant. The mother throws herself over her two children, while the father stands up, grabs his cell phone, and runs for cover.

The restaurant ended up just being covered by a cloud of snow dust, but the father’s impulsive reaction plunges their marriage into crisis. His wife now knows that when push comes to shove, she cannot rely on him.

The European Union (EU) faces its own crisis of trust. The onslaught of COVID-19 provoked nationalist reflexes, laid bare old divisions, and revived decade-old bets on the demise of the union.

The EU is not on the frontline of the epidemiological fight against COVID-19. The provision of an adequate health infrastructure and decisions on school closures or lockdowns are all national competencies. Still, for member states, the EU underpins their capacity to act. Not even Germany is self-sufficient in pharmaceuticals or food. To function properly, all nations are reliant on the single market operating, crisis or not.

This fact makes it all the more tragic that a Franco-German double-blow placed the single market into a coma at the beginning of the crisis. On March 4, when northern Italy was already running out of masks, France and Germany both ordered national export bans for protective medical equipment. Rome’s ambassador to Brussels rightly protested that Italy was being left alone.

Internal border checks were also reintroduced all over Europe: Denmark, Poland, Austria, and then Germany all shut their national borders. Like Östlund’s avalanche, in the end, it did not matter: Most countries have implemented strict lockdowns, making it impossible for citizens to leave their homes, let alone the country. And as with the lockdowns, the border restrictions will be lifted—but the loss of trust will linger on.

The European Commission, whose role is to act as the guardian of the EU’s treaties, helplessly witnessed the dismemberment of the single market and the Schengen free travel area.

One should not hide from the facts: When the crisis first hit, the EU was absent. Its member states were left to their own devices—and often acted at the expense of their neighbors. This sorry state has provided ammunition to the union’s enemies at home and abroad. Predicting the imminent collapse of the EU is back in fashion.

In Östlund’s film, the father initially tries to suppress the memory of his impulsive reaction. He then tries to convince himself that it was a completely normal response. It is only at the very end that he tries to undo the damage caused by his mistake—when he realizes the very survival of his family is at risk.

The EU is undergoing a similar psychological journey. And as with all previous crises, the EU family will emerge stronger and more coherent.

The Eurozone sovereign debt crisis of 2010-2015 split the EU politically between its North and South, but brought it closer together institutionally. There is now union-wide banking supervision and a joint bailout fund for Euro-area members, the European Stability Mechanism. The European Central Bank now ensures that all member states can borrow at sustainable levels. This year, even as national leaders fended for themselves, these EU institutions have functioned as planned to contain the financial risks of the pandemic.

As one of the EU’s founding fathers, Jean Monnet, put it, “Europe will be forged in crises, and will be the sum of the solution adopted for those crises.”

This is the reason why Monnet pushed for the creation of a single market. It wasn’t simply about economic gains. More important was the political aspect: Pan-European value chains would undermine the relevance of Europe’s nation-states. This would, on the one hand, prevent a return to nationalism, and on the other hand, economic structures would be challenged by crises—which can then only be resolved through political integration. As economic historian Niall Ferguson has put it, markets are not natural institutions. They must be upheld by a political power.

Seventy years after Monnet’s prediction, the dialectic process of EU integration still works. Like the father in Force Majeure, the union and the member states have begun the long process of making amends—and setting up a new foundation for the future.

It may have taken the Commission ten days to act, but it bore down hard on Berlin, threatening to take Germany to the European Court of Justice in an accelerated procedure over its medical export ban. The German government relented, and exports were allowed—though we may never know the human cost of that decision.

The national border closures produced mile-long traffic jams. At the Polish-German border, lorries had to wait for up to 30 hours, and German supermarkets warned shelves would lay empty if the chaos at the border persisted. Meanwhile, German producers of ventilators rely on European supply chains.

Brussels was suddenly needed again as an arbitrator and facilitator. To ensure that foodstuffs and essential supplies could get to their destinations, Brussels did what it does best: Issue guidelines on how to manage goods transport at the intra-European borders. The traffic jams have receded.

And after much delay, the EU is helping member states deal with the public health emergency, organizing the procurement of medical products—leveraging the collective bargaining power of its member states and preventing a bidding war of the sort we have seen in the United States. And Brussels has created a strategic reserve of medical goods that can be distributed to the member states most in need.

There is still plenty of penance to be done in the EU. Confessing sins and asking for forgiveness is an essential first step.

But sincere or not, penance will only go so far. Ultimately, rebuilding trust requires action. And Europe is lucky to get a second chance to correct its miserable first impression.

The European economy must be rebuilt from the economic ruin that the pandemic has wrought. Unemployment is rampant throughout the EU; fiscal deficits will and should balloon to make up the gap in demand. As in 2010, some member states will find it harder, and more expensive to borrow.

Moreover, countries like Italy, Spain, and France will need to spend more, as they are worse hit and will need to pause their economy for longer to get the virus under control. The crisis will thus aggravate the differences in debt load within the EU. Traders are already returning to their periodic game of betting against Italian bonds.

French politicians have been keen to highlight the gravity of the situation. In his address to the nation on April 13, President Emmanuel Macron said Europe is approaching “a moment of truth.” Le Maire put the political choice at hand in starker terms: Either Europe will accept to shoulder the costs of the crisis together, or the project will fail.

But Le Maire is wrong about the risk of failure because Europe does not have a choice.

Euro-area member states will have to spend enormous sums of money to support the unemployed and to restart growth. They can only do so with the support of their central banks. The U.S. Federal Reserve, Bank of Japan, and Bank of England have already announced ambitious programs to purchase government debt. For Europeans, the task falls to the European Central Bank (ECB).

The ECB has already taken the historic step in lifting its prior limits on government bond purchases. It can now buy as many Italian, Greek, or German bonds as it needs to keep borrowing costs low.

The member states that have always resisted a European fiscal union are fighting a war that is already lost: Either they agree to burden-sharing and accept that the debt accrued during the crisis will be mutualized to some degree, or they let the ECB implicitly do it for them. For Italy’s state finances, either option would work, but the latter option comes with two important downsides. First, it undermines the ECB’s monetary independence. Second, and more importantly, the EU would not get to claim credit for helping Rome.

Toward the end of Force Majeure, the Swedish family hits the slopes again and gets into deep mist. The wife (probably on purpose) loses sight of her family, pretends to be injured, and cries for help. This time, the husband comes to her rescue. The marriage is not saved yet, but this at least sets the basis for the marriage having a future.

If the EU fails one day, it will not be because it did not mutualize debt in this crisis, but because of a political crisis of legitimacy that unfolds on its own timetable. It still has plenty of chances to right things. European leaders need to find the courage to tell their populations the truth: There will be more Europe, or no Europe.