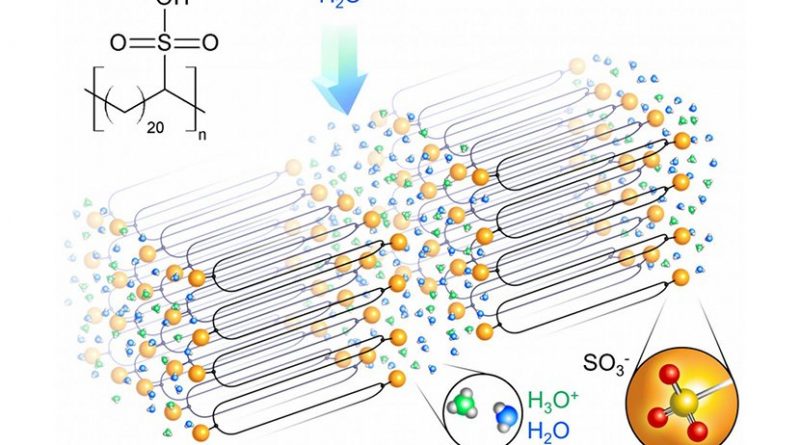 The researchers' new structure self-assembles into hairpin shapes, resulting in acid-lined channels that allow for efficient transport of protons across the electrolyte. Credit: Nature Materials

Fuel cells and batteries provide electricity by generating and coaxing positively charged ions from a positive to a negative terminal which frees negatively charged electrons to power cellphones, cars, satellites, or whatever else they are connected to. A critical part of these devices is the barrier between these terminals, which must be separated for electricity to flow.

Improvements to that barrier, known as an electrolyte, are needed to make energy storage devices thinner, more efficient, safer, and faster to recharge. Commonly used liquid electrolytes are bulky and prone to shorts, and can present a fire or explosion risk if they’re punctured.

Research led by University of Pennsylvania engineers suggests a different way forward: a new and versatile kind of solid polymer electrolyte (SPE) that has twice the proton conductivity of the current state-of-the-art material. Such SPEs are currently found in proton-exchange membrane fuel cells, but the researchers’ new design could also be adapted to work for the lithium-ion or sodium-ion batteries found in consumer electronics.

The study, published in Nature Materials, was led by Karen I. Winey, TowerBrook Foundation Faculty Fellow, professor and chair of the Department of Materials Science and Engineering, and Edward B. Trigg, then a doctoral student in her lab. Demi E. Moed, an undergraduate member of the Winey lab, was a coauthor.

They collaborated with Kenneth B. Wagener, George B. Butler Professor of Polymer Chemistry at the University of Florida, Gainesville, and Taylor W. Gaines, a graduate student in his group. Mark J. Stevens, of Sandia National Laboratories, also contributed to this study, as well as Manuel Maréchal and Patrice Rannou, of the French National Center for Scientific Research, the French Alternative Energies and Atomic Energy Commission, and the Université Grenoble Alpes.

A variety of SPEs already exists. Nafion, which is widely used in proton-exchange membrane fuel cells, is a sheet of flexible plastic that is permeable to protons and impermeable to electrons. After absorbing water, protons can flow through microscopic channels that span the film.

A thin, SPE like Nafion is especially enticing for fuel cells in aerospace applications, where every kilogram counts. Much of the bulk of portable batteries comes from shielding designed to protect liquid electrolytes from punctures. Systems using liquid electrolytes must separate the electrodes further apart then their solid electrolyte counterparts, as metal build-up on the electrodes can eventually cross the channel and cause a short.

Nafion addresses those problems, but there is still much room for improvement.

“Nafion is something of a fluke,” Winey said. “Its structure has been the subject of debate for decades, and will likely never be fully understood or controlled.”

Nafion is hard to study because its structure is random and disordered. This fluorinated polymer occasionally branches off into side chains that end with sulfonic acid groups. It’s these sulfonic acids that draw in water and form the channels that allow for proton transport from one side of the film to the other. But because these side chains occur at random positions and are of different lengths, the resulting channels through the disordered polymer are a twisty maze that transports ions.

With an eye toward cutting through this maze, Winey’s group recently collaborated with Stevens to discover a new proton-transporting structure that has ordered layers. These layers feature many parallel acid-lined channels through which protons can quickly flow.

“It’s like superhighways versus the country roads of Provence,” Winey said.

This new structure is the result of a special chemical synthesis route developed by Wagener’s group at the University of Florida. This route evenly places the acid groups along a polymer chain such that the spacing between the functional groups is long enough to crystalize. The most detailed structural analysis to date was on a polymer with exactly 21 carbons atoms between carboxylic acid groups, the polymer that initiated the Penn-Florida collaboration a decade ago.

While Winey’s group and Stevens were working out the structure and noting it’s potential for transporting ions, Wagener’s group was working to incorporate sulfonic acid groups to demonstrate the diversity of chemical groups that could be attached to polyethylenes. Both teams realized that proton conductivity would require the stronger acid.

The details of this process were also recently published in the journal Macromolecular Chemistry and Physics.

With the chains forming a series of hairpin shapes with a sulfonic acid group at each turn, the polymer assembles into orderly layers, forming straight channels instead of the tortuous maze found in Nafion.

There are, literally, still some kinks to work out. The group’s next step is to orient these layers in the same direction throughout the film.

“We’re already faster than Nafion by a factor of two, but we could be even faster if we aligned all of those layers straight across the electrolyte membrane,” Winey said.

More than improving fuel cells where Nafion is currently employed, the crystallization-induced layers described in the researchers’ study could be extended to work with functional groups compatible with other kinds of ions.

“Better proton conduction is definitely valuable, but I think the versatility of our approach is what is ultimately most important,” Winey said. “There’s still no sufficiently good solid electrolyte for lithium or for hydroxide, another common fuel cell ion, and everyone who is trying to design new SPEs is using a very different approach than ours.”

Cellphone batteries made with this type of SPE could be thinner and safer, with the superhighway-style ion channels enabled by the researchers’ design, recharge much faster.

“Precision synthesis has been one of the grand challenges in polymer science, and this remarkable work demonstrates how it can open doors to novel materials of great promise,” said Linda Sapochak, director of the National Science Foundation’s Division of Materials Research. “NSF is excited to see that its support at both universities for this integrative collaboration has led to a synergistic breakthrough.”