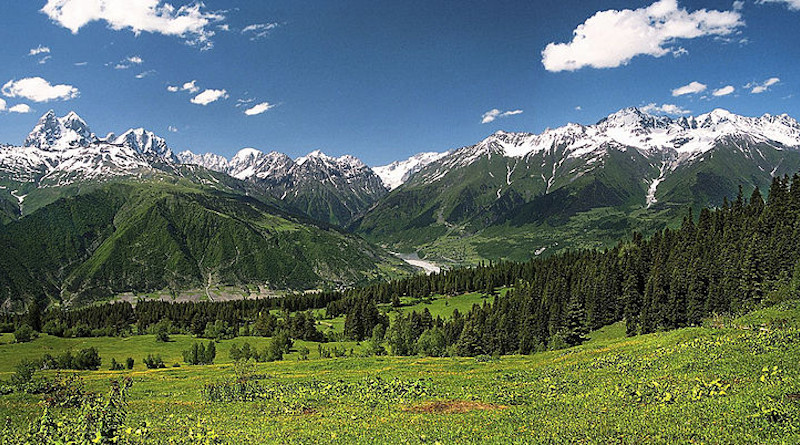 The climate of Georgia makes it ideal for growing corn and harvesting grapes and tea. Photo Credit: Polscience, Wikipedia Commons

It could be argued that the land was the main means of production in medieval Georgia.

Agriculture was the leading branch of production in medieval Georgia (lasting until the 15th cc.). Although, at that time, there were cities in Georgia and other developed countries where trade and craftsmanship were widespread, the vast majority of the population still lived in rural areas and mainly survived through agriculture.

Under such conditions, the cultivation of land and harvest emanating from it were a major source of wealth. Consequently, it could be argued that the land was the main means of production in medieval Georgia.

During the period of developed feudalism, the land belonged to the Georgian king, secular feudal lords and church-monasteries. Most of the population, peasants, also belonged to them, and the majority of the agricultural lands were given to the peasants with the right to permanent use. The peasant’s agricultural unit can be roughly translated as the “peasant base”, which was a plot of arable land approximately 5.5-6 ha. in size, and which also included one vineyard (0.3-0.5 ha). A considerable part of the land belonged to the King, secular feudal lords, and churches/monasteries, which were cultivated through the peasants’ labor tax. Thus, the arable land fund was mainly concentrated in the small “peasant base” and in the personal farms of the feudal lords.

Since bread was the main product in the diet (about 1.5 kg of bread per day was necessary for one adult man) of the population in medieval Georgia and other states of the time, cereals were grown on most agricultural lands. Accordingly, these crops occupied approximately 60-70% of the cultivated land.

The production of wheat or other corns on the territory of Georgia was quite developed for centuries. This, together with fertile lands, was the result of the constant improvement in plowing weapons and the construction of irrigation systems. According to 18th century data, the harvest in eastern Georgia happened eight times and 600 kilograms of grain were taken from 1 (0.5 ha) land daily, which is one of the highest data in the world at that time.

We have no information on the overall agricultural yield from pre-feudal and feudal Georgia. Relatively late data gives the following information: at the end of the 16th century, more than 74 million kg of cereals was grown in Samtskhe-Saatabago (in present day Turkey); and more than 115 million kg in Kartli-Kakheti at the beginning of 19th century. Accordingly, Georgia was self-sufficient in terms of grain products. At the same time, the price of wheat and other cereals was lower in Georgia than in other countries. Due to the devastating invasions, there was a shortage of products in the country from time to time, and the price increased, although such facts did not seem systemic, and it was the great wealth that ensured the longevity of the small country in the face of aggression from large states. This wealth, among other factors, led to the preservation of national identity.

Based on the fact that in the coastal zone of western Georgia wheat was less plentiful, mainly low-grain cereals (ghomi) was cultivated. Corn (maize) was cultivated from the 17th century. The dynamics of prices testify that in the era of the unity of the Georgian state, large quantities of wheat were imported from Kartli-Kakheti and Samtskhe-Saatabago to western Georgia. In the 16th-18th centuries, wheat became more expensive in western Georgia due to the severance of economic ties between the two parts of the state. The unions of western and eastern Georgia were restored in the late 18th century, which led to an equalization of wheat prices.

In feudal Georgia, after the production of cereals, the main place belonged to viticulture and winemaking, due to the role of wine in the daily life of the population. In ancient Georgia, wine was used not only for holidays and funeral banquets, but also for primary consumption. Wine was so important that it was consumed even during military mobilization. Small amounts of wine were the main components of the diet at the time, and men usually drank up to 1 liter of wine per day. Consequently, large quantities of wine were brought from the peasants‘ small vineyards and feudal lords, much of which was used for personal consumption and some for sale in Tbilisi and other Georgian cities. Wine was also an export commodity. Ivane Javakhishvili’s research confirms that there were 420 vine types spread in different parts of ancient Georgia. In feudal Georgia, many varieties of different soils and climate conditions led to the appearance of many types of wines.

According to various sources, the harvest in feudal Georgia increased gradually, and where in the 12th-13th centuries from 1 vineyard up to 800 liters of wine were produced, in the 18th century the figure stood at more than 1200 liters. According to the statistics of the beginning of 19th century, the country produced around 50 million liters of wine. All this indicates the high development and constant progress in this specific field.

Other branches of intensive farming in Georgia during the feudal era were also properly developed. Legumes: sorghum, lentils, peas, and from the 17th century- beans. Rice cultivation was also widespread, which would have originated in eastern Georgia from Iran in the 9th century, while much earlier in western Georgia. In some parts of Georgia, other plants such as flax, hemp, and cotton were intensively cultivated from ancient times.

Other plants were available in Georgia: onions, garlic, carrots, cucumbers, cabbage, peppers, mustard etc. Some of the named crops were brought to Georgia in ancient times, while others came relatively late. There were also many orchards in the country, and various types of fruits were common, including peaches, apples, pomegranates, mulberries, grapes, figs, pears, walnuts, lemons, olives, and chestnuts.

Thus, agriculture in Georgia was properly developed in the feudal era. It is also noteworthy that in the 16th-18th centuries, despite the deterioration of the political situation in the country, various sectors of agriculture not only failed to collapse, but even progressed.

The number of people living with undiagnosed HIV is increasing in the WHO European Region. According to data published today