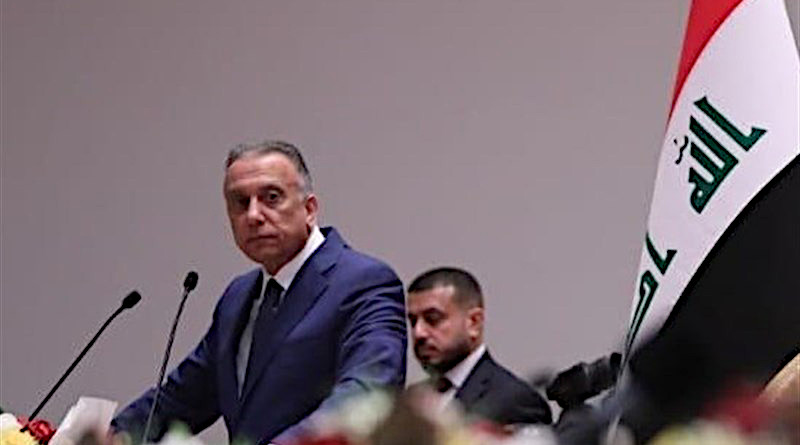 On June 25, 2020, fourteen members of the Iran-backed militia Kataib Hezbollah (KH) were going about their usual nefarious business.  On this occasion they were setting up rocket attacks on Baghdad airport and the US embassy.  Much to their astonishment, troops from Iraq’s Counter Terrorism Service (CTS) arrested them.  The security forces then proceeded to raid KH headquarters, seize rockets and detain three leaders of the group.

KH, a law unto itself for years, tried to assert itself. Its operational commander, Abu Fadak, pulled together a force of around 150 fighters in nearly thirty armored pickup trucks, drove to the prime minister’s residence and demanded the suspects be released to his custody.  Prime Minister Mustafa Kadhimi declined to do so.  However, rather than handing them over to the US forces, as perhaps Abu Fadak had feared, he placed them under the custody of the Security Directorate of the PMF (the Popular Mobilization Forces).  At first glance this might have appeared a somewhat equivocal move, since the directorate is led by a KH commander, Abu Zainab al-Lami.  But Kadhimi had already taken steps to ensure a new level of of control over the PMF, and he retained the whip hand.

The PMF (also known as the Hashed Al Shaabi), is a 100,000 strong force of mainly Iraqi Shiite paramilitaries backed and trained by Iran.  It was set up originally to help Iraqi government forces fight ISIS.  Later it was nominally integrated into the state security forces, although many groups remained more or less independent and were in no sense under government control.

On June 3 the head of the PMF, Faleh al-Fayadh, announced that all Iraqi paramilitary groups were to shut down their offices. The many disparate and independent groups were to be merged into the main organization, which would be subject to new directives as to its future role and function. He also announced a “ban of all non-military actions that lie outside the Hashed’s objectives, especially as the Hashed is considered to be an official entity of the state’s security apparatus”.

Kadhimi’s strong-arm tactics against KH have been described as “the strongest state action against Iran-backed paramilitaries in years.”  Kadhimi had already announced that he intended to crack down on militia groups which target US installations.  Before becoming prime minister in May, Kadhimi had been Iraq’s intelligence chief for a good few years – and it was Iraqi intelligence that generated the evidence needed to secure a search and arrest warrant for the raid. This is the first time that, based on intelligence, the Iraqi government has succeeded in foiling a terrorist attack within the country. It seems to indicate that Kadhimi intends to follow through on his tough talk.

The suspects have been charged under Iraq’s counterterrorism statutes.  If Kadhimi manages to hold his course, and the Iraqi government can succeed in prosecuting them, it would be a formal recognition that anti-US violence is a terrorist offense against the Iraqi state. So far, despite numerous rocket attacks that have wounded and killed Americans and Iraqis, not a single KH fighter has been indicted for anti-US terrorist acts.

These recent events could be interpreted in more than one way.  Kadhimi’s foremost objective might be to restore law and order to his chaotic country, and put an end to the unruly and uncontrolled gangs that have run riot ever since the fall of Saddam Hussein.

Alternatively, we might be witnessing the first steps in a longer-term plan aimed at loosening the relentless grip that Iran has managed to exert over Iraq, and releasing his country from the danger of becoming an Iranian vassal state.

Clearly the Iranian-backed groups within Iraq fear the latter.  A security spokesman for one such militia issued a statement on June 26, describing Kadhimi as an “American agent.”  Abu Ali al-Askari, the security chief of KH, issued a dire warning, dubbing Kadhimi a “mutant”.  “We are waiting for you to suffer from God’s torture, or by our hands.”

Al-Askari also accused Kadhimi of attempting to distance himself from the killing of the “two martyrs,” a reference to the January drone strike which killed Islamic Revolutionary Guards Corps (IRGC) commander Qassem Soleimani and deputy commander of the PMF, Abu Mahdi al-Mohandes.

There is no doubt that whichever outcome he is planning, and even more so if he is seeking both, Iraq’s new prime minister has a fight on his hands.