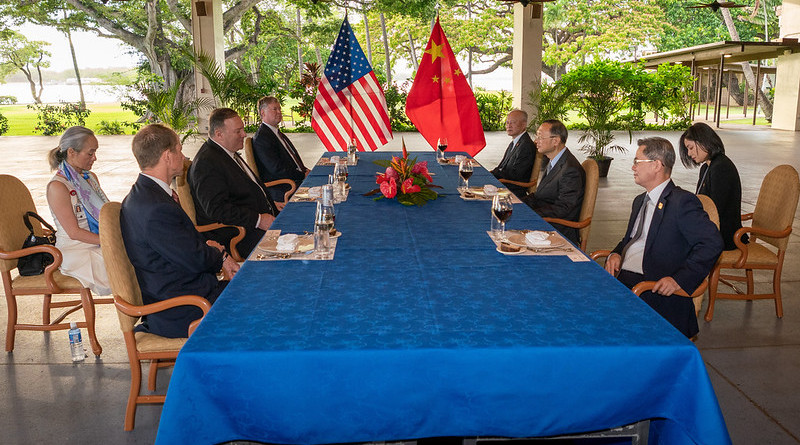 The Pompeo-Yang meeting in Hawaii was a welcome respite in an otherwise escalating great power rancor between the United States and China. It showed that both sides remain open to dialogue, cognizant of growing global concern about their rivalry and aware of the intense domestic pressures confronting their leaderships. However, the fleeting aloha moment may not be meant to dial down tensions, but rather a chance to probe one another’s red lines and find out how much leeway each power is willing to concede on the myriad of issues on which they disagree.

The meeting between Secretary of State Michael Pompeo and Director of the Foreign Affairs Commission of the Communist Party of China’s Central Committee Yang Jiechi was a seven-hour closed-door meeting at Hickam Air Force Base in Honolulu. The summit was unexpected and both sides were tight-lipped on details. The cumulative weight of hot-button issues – from Hong Kong’s controversial national security law and flashpoints over Taiwan, to the South China Sea and wrangling over trade and technology – had built for months, and may have proved too much tension to bear.

Pyongyang’s blasting of the inter-Korean liaison office in Kaesong may have also provided cause for urgency. A damning indictment of President Donald Trump’s foreign policy by his former National Security Adviser John Bolton provided some context as well, especially as it may impact Trump’s re-election bid this November.

In the brief post-event readout, Secretary Pompeo “stressed important American interests and the need for fully-reciprocal dealings between the two nations across commercial, security, and diplomatic interactions.”  The former CIA chief also “stressed the need for full transparency and information sharing to combat the ongoing COVID-19 pandemic and prevent future outbreaks.” The statement reflects differences between the two powers in a broad range of issues and resonates U.S. views regarding China’s mishandling of the contagion.

For the U.S., a tweet from Pompeo may be indicative: getting China to fulfill its commitment under the “Phase One” trade agreement reached last January was key. President Trump seems similarly inclined; while saying that decoupling remains a policy option, President Trump seems more likely to push for a deal. Beijing’s pledge to buy $200 billion worth of American goods and offer greater access to the Chinese market may help revive an economy battered by the pandemic. It will also vindicate the political capital he expended for the talks and set the stage for a second phase. These gains would come in handy as elections draw near.

In return for correcting the trade imbalance, curbing malfeasance and securing better protection of US intellectual property in China, President Trump may extend a hand in resolving Beijing’s recent reverses. In late May, for instance, he offered to mediate between China and India over their border spat, echoing a similar move he made in 2017 for China and its Southeast Asian neighbors over the South China Sea. The U.S. is also keen to bring China into its joint nuclear arms talks with Russia, while both China and the US may forge cooperation to respond to North Korea’s recent action.

For China, sending a seasoned American hand instead of its Foreign Minister – who drew some flak for reportedly condoning and defending a bellicose brand of diplomacy – suggests that Beijing is after substance over optics. The State Department readout lacked any mention of Xinjiang, Hong Kong, Taiwan, and the South China Sea – a fact that may be read as a concession to Beijing, although these issues have been the subject of past separate Department statements. Foreign Ministry Spokesperson Zhao Lijian buttressed this view by saying that Yang expounded on China’s positions towards Taiwan, Hong Kong, and Xinjiang which were deemed as internal affairs.

The short statement from China’s Ministry of Foreign Affairs similarly lacked specifics; it described the exchange as “constructive,” and said it was an opportunity for both countries to express their respective positions. It also said that “the two sides agreed to take actions to earnestly implement the consensus reached by the two heads of state” – a possible reference to the initial trade pact.

However, America has seen mounting public and bipartisan antipathy against China, and China has witnessed rising “Wolf Warrior” sentiment towards U.S. and Western criticisms, constraining movement for both Washington and Beijing. Congress wants to clip the executive’s diplomatic latitude, probably on account of Trump’s unpredictability, transactionalism, and worries that his foreign policy gambits may erode America’s global standing.

By lining up bills aimed at imposing sanctions on China, the legislative branch hopes to tie the hands of the President. No candidate wants to appear soft towards a country increasingly portrayed not only as a competitor, but as a threat; thus, the Trump administration has to walk a tightrope as it deals with Beijing. Hence, on the same day Pompeo and Yang met in Hawaii, Trump signed the Uyghur Human Rights Policy Act. The move evoked a similar chord when Trump signed the Hong Kong Human Rights and Democracy Act last November while trade negotiations leading to the Phase One deal was underway.

Earlier that month, both sides reached an agreement “in principle” and discussed rolling back tariffs in one another’s goods in stages. That said, the White House is also pushing back on Congress’ efforts to limit its diplomatic elbowroom. Hence, caveats on Trump’s signature on the two laws (and likely on succeeding China-related bills) were made, saying that they should in no way stifle the executive’s constitutional exercise of diplomacy. To the extent that certain provisions like sanctions requirements interfere with the President’s conduct of foreign relations, they would be treated as advisory and not mandatory.

But while this negotiate-and-sanction approach may improve Trump’s standing at home and abroad, it makes it difficult for President Xi Jinping not to appear meek in the face of American pressure. Variance in their form of government does not make Xi any less immune to domestic forces. In fact, with the pandemic threatening one of the two chief centenary goals of the CCP – to attain a “moderately prosperous society” by next year – one can expect stress to build up on Beijing’s top leadership. In fact, the appearance of assertiveness on foreign policy issues – especially on Hong Kong and Taiwan, where they intersect with Beijing’s core interests – is a minimum expectation.

While the Hawaii summit was not a reset, it did provide the U.S. and China a venue to outline their basic positions on pressing issues that affect their bilateral ties. Knowing the floor and room for discussion may go a long way in holding future strategic or issue-specific dialogues.