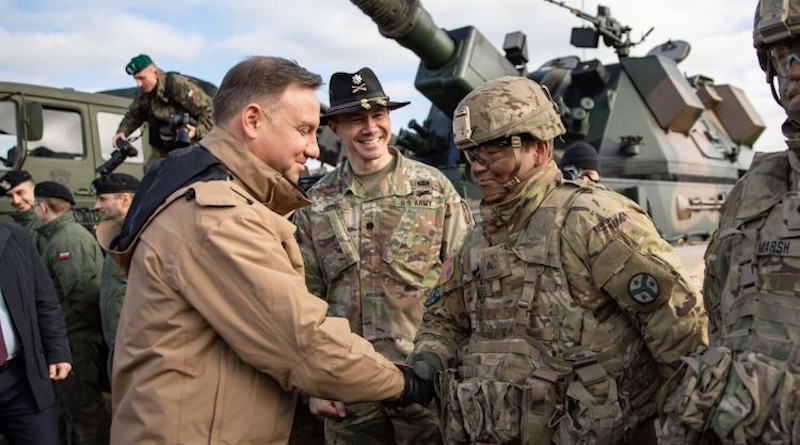 Russia and the United States, since the end of the Cold War, have had confrontations on many issues, and it is highly unlikely if both will ever find something in common. There have been differences on regional issues from the Middle East and North Africa through Asia to Europe. Now the latest, that has drawn both global leaders into sharp antagonism is the proposed [re]deployment of US military forces from Germany to Poland.

Poland has on its borders the Baltic Sea, Lithuania and Russia’s Kaliningrad Autonomous Republic to the north, Belarus and Ukraine to the east, and Germany to the west. Understandably, Russians express their discontent and sentiments over possible threat of the stationing of US military forces closer to Russia.

Russia is further concerned about Kaliningrad squeezed between neighbouring Poland and the Baltics. Moscow sees Poland becoming a tool deployed against Russia. In the Baltics, Lithuania, as well as former Soviet Belarus, appear to promote Washington’s interests in the region.

The United States and Poland had agreed to an increase in US military presence in Poland in 2018 when the initiative of creating a proposed “Fort Trump” came up during official discussions President Andrzej Duda in Washington. According to different sources, an estimated 4,500 to 5,000 US troops are already stationed in Poland.

Donald Trump recently said that Washington would reduce its military contingent in Germany to 25,000 if Berlin refused to pay for their accommodation and to increase defence spending under agreements with NATO. Currently, Germany accommodates 52,000 US troops.

The US expects to get along with Russia despite plans to deploy troops in Poland. “I think it sends a very strong signal to Russia, but I think that a stronger signal sent to Russia is the fact that Germany is paying Russia billions of dollars to purchase energy from Russia through the pipeline,” President Donald Trump said at a joint news conference with the Polish president on June 24.

There have, however, been reactions to the White House decision.

Moscow noted the statement by President Trump about his intention to reduce the US troop contingent in Germany by one third. For Moscow, it would welcome any steps by Washington to reduce its military presence in Europe. Such steps would certainly help ease the confrontation potential and military-political tensions in the Euro-Atlantic region, Russia’s Foreign Ministry Spokesman Maria Zakharova said in her weekly briefing on June 11.

She further pointed out that Moscow has always said that the preservation of a large US troop contingent in Germany after the country’s unification in 1990 is a Cold War relic. Moscow is convinced that in the current geostrategic realities, all European countries, especially a country as powerful as Germany, were certainly able to ensure their security independently, without the obtrusive patronage of the United States.

“As for the current US initiative, it causes apprehension, because it was immediately followed by the invitation to US soldiers in Germany to move to neighbouring Poland. I’d like to emphasize that reconfiguration of the US military presence in Europe will not only escalate the already high tensions in European security but also complicate the prospects of a constructive Russia-NATO dialogue in the military-political sphere. Obviously, many politicians in Warsaw would like to wreck the commitments fixed in the Russia-NATO Founding Act,” she explained.

According to her, this line is generally unacceptable for Moscow. Zakharova said , “if Washington is really going to withdraw its troops from Germany, it must also take along US non-strategic nuclear weapons that are deployed there. This is particularly important since the Americans continue practical methods of the potential use during joint nuclear missions with non-nuclear NATO members, which is an obvious violation of the Nuclear Non-Proliferation Treaty. We have repeatedly drawn their attention to this incongruity.”

On May 12, a month earlier Trump’s decision on redeployment, Poland started to implement a new national security strategy, in which Russia was designated as the main threat to Warsaw. Kremlin officials have interpreted this as a clear demonstration of lack of strategic vision.

Instead, Poland and Russia have looked for opportunities to build relations that could, at least, be mutually satisfactory and could include measures toward somewhat easing the political tensions.

Policy experts at the Valdai Discussion Club, a Russian non-governmental organization specializing on foreign policy, believes that the US authorities’ decision to redeploy part of their military contingent from Germany to Poland, could trigger another arms race in Europe.

Deputy Director of the Center for Comprehensive European and International Studies at the National Research University-Higher School of Economics, member of the Valdai Discussion Club, Dmitry Suslov, expressed concern that in a situation where President Trump declared his intention to cut military presence in Germany it is essential for Russia to understand where these forces may be relocated.

“If they are pulled out back to the United States, this will open up major opportunities in front of Russian-European relations for strengthening the dialogue between Russia and the European Union in the field of European security. This development would be favorable for Russia,” Suslov said. “If any considerable part of this contingent is redeployed to Poland, this will certainly exacerbate the Russia-NATO confrontation and the situation in the field of European security and worsen the militarization of Europe.”

The latter option would be tantamount to reincarnation of NATO’s forward deployment and Cold War era strategies. “It implies the possibility of quick military aggression and prompt military strike. Should NATO’s contingent in Poland be strengthened in this way, Russia will have to take the corresponding retaliatory steps to ward of this threat,” Suslov explained.

“Russia will be building up military infrastructures on its Western borders and deploying weapon systems capable of instantly hitting and eliminating these bases. The missile bases. This will trigger another spiral of the arms race in Europe.”

According to the expert, hypothetical redeployment of US forces from Germany to Poland would be an outright violation of the Russia-NATO Founding Act, by which the alliance declared it has no plans for creating significant military infrastructures in the territory of the newly incorporated members.

Military experts interviewed by Nezavismaya Gazeta, a Russian daily newspaper, acknowledged that fighters from the USAF’s Spangdahlem Air Base, located in western Germany, would be sent to Poland, which would pay for the additional deployment of US forces in the country. The US tactical aviation at the German base currently has 50 fourth-generation F-16CJ multi-functional light fighters and Republic A/OA-10 attack aircraft, as well as TPS-75 radar systems.

According to the published text in Nezavisimaya Gazeta, if under a contract with the United States, Poland purchased 32 fifth-generation F-35A Lightning II fighters by the end of 2024, the total number of modern offensive combat aircraft in this country would be more than 100 units. Most of them can carry the recently upgraded US nuclear tactical bomb B61-12.

“The Russian Western Military District has several aviation regiments, armed with modern fourth-generation combat aircraft. However, their total number is not much bigger than what can be concentrated in Poland in a few years. NATO’s aviation potential, in general, is already superior to Russia’s. And in the coming years it will be significantly increased, which will require specific actions from Russia to strengthen its western borders, including aviation forces,” military expert Lieutenant General Yuri Netkachev told the newspaper.

According to military expert Colonel Vladimir Popov, transferring a portion of the US forces to Poland, namely modern combat aircraft, contradicts the 1997 Russia-NATO Founding Act, according to which NATO has committed to, not deploy its troops along Russian borders on an ongoing basis. “However, it can be assumed that US aviation and other units will be based in Poland on a temporary, rotational basis. But this is also a real threat to Russia,” the expert said.

Russia proceeds from the idea that Poland is aware of the costs of obtaining the status of a frontline state, including those that will affect its own security, Russia’s Deputy Foreign Minister Alexander Grushko told Russia News agency TASS, while commenting on US plans for moving part of its forces from Germany to Poland.

“Apparently, one should proceed from the understanding that if Warsaw wishes to intentionally position itself in the capacity of a frontline state by accommodating foreign forces on a permanent basis, it is apparently aware of all related costs, including those that concern its own security,” Grushko said.

With Joe Biden, the Democratic candidate leading the polls against Republics, Russian officials will have to wait till the November elections. Should the Democrat candidate, Joe Biden, emerge the winner, they will try to shift in the process of military reassignment.

The main question still remains whether this military intention will materialize, and whether Trump stands elected for a second term. If Trump fails to achieve the enforcement of this decision by January and, at the same time, loses the presidential election, then the next White House administration will, most probably, reverse transfer.