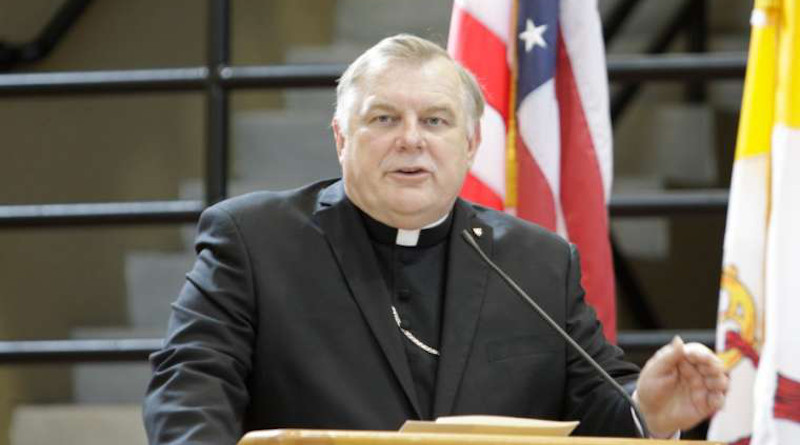 The new leader of the U.S. Catholic bishops on religious liberty has warned of a “soft despotism” of religious intolerance in the U.S.  Archbishop Thomas Wenski told CNA that “new Jacobins” are driving Catholics from the public square for their beliefs.

“We’re not second-class citizens because we are people of faith,” said Wenski, Archbishop of Miami and head of the U.S. bishops’ religious freedom committee, in an interview with CNA on Tuesday.

The archbishop said a new wave of religious intolerance is forcing believers and belief out of public life.

Wenski pointed to laws forbidding public funding of religious schools—overruled by the Supreme Court this week—but also in the HHS contraceptive mandate case of the Little Sisters of the Poor, and 21 year-old Jack Denton, who was removed from his student government position at Florida State University for defending Church teaching.

Hostility to public Catholicism is “treating us as somehow less worthy of full participation in the benefits of American life,” he said.

Wenski is the new acting chairman of the U.S. bishops’ religious freedom committee, taking office this month after the former chair Bishop George Murry, S.J. of Youngstown died on June 5 after a relapse of leukemia.

The archbishop spoke with CNA this week after the Supreme Court decided in favor of religious schools in Espinoza v. Montana Department of Revenue. In a 5-4 decision, the court ruled that Montana’s state constitution discriminated against religious schools in barring their access to a taxpayer-funded scholarship program.

Chief Justice John Roberts wrote in the opinion of the court that the U.S. constitution “condemns discrimination against religious schools and the families whose children attend them.”

“The Supreme Court got it right” on religious schools, Wenski told CNA on Tuesday, but “a lot of people were not happy with the decision [Monday] on the abortion issue,” he said of the court’s ruling in June Medical Services, LLC v. Russo that struck down Louisiana’s safety regulations of abortion clinics.

Montana’s no-aid clause at the heart of the Supreme Court case, which forbids public funding of “sectarian” causes or religious institutions, was initially passed as a Blaine Amendment in the state’s 1889 constitution and was included again in its 1972 constitution.

Blaine Amendments were commonly enacted by states in the late 19th-century, with 37 states adopting such provisions. Archbishop Wenski said that they were anti-Catholic in nature, as they meant to block public funding of Catholic parochial schools that the largely-Protestant public school system received.

“France doesn’t have any problem supporting parents who send their children to Catholic schools,” Wenski said. “The same is true of Canada, Australia, et cetera.”

“Such laws have never really been neutral, as they pretend to be,” he said.

Another recent example of “soft despotism” in American life Wenski highlighted is the case of Jack Denton, former president of the Florida State University student senate and a rising senior at the school.

Denton expressed concerns about some policy positions of the groups BlackLivesMatter.com, the ACLU, and Reclaim the Block in a messaging forum of the university’s Catholic student union.

He noted that the BlackLivesMatter.com “fosters ‘a queer-affirming network’ and defends transgenderism,” while the ACLU “defends laws protecting abortion facilities.” Reclaim the Block, Denton said, “claims less police will make our communities safer” and supports budget cuts to police departments. These positions, he said, are “things that are explicitly anti-Catholic.”

Another member of the forum sent screenshots of Denton’s statements to members of the student senate, who ultimately voted to remove him as head after a Change.org petition received thousands of signatures calling for his removal, accusing him of making “transphobic and racist remarks.”

Denton said he did not make the statements in his official capacity as student senate president and he was simply posting “defenses of, basically, Catholic moral teachings,” Wenski said, yet “that was a step too far for many of these new Jacobins we see around.”

Such events are “becoming more common than remarkable, unfortunately,” the archbishop said, noting that Catholics are increasingly becoming ostracized, ridiculed, or even denied jobs because of their religious beliefs.

One religious freedom case that the Supreme Court has yet to decide is that of the Little Sisters of the Poor against the HHS contraceptive mandate. Archbishop Wenski said he hopes that Tuesday’s decision in Espinoza will bode well for the Sisters.

Both cases, he said, “really deal with the freedom to serve” and the freedom of Catholics to live out their faith in the public square.

As the new chair of the religious freedom committee, Archbishop Wenski said his most pressing issue is simply figuring out how to operate the committee in spite of the “handicaps” of the new coronavirus pandemic.

One positive note, he said, was the “tremendous assistance to parishes and schools across the country” from loans under the Paycheck Protection Program (PPP), an emergency loan program set up by Congress in March to keep small businesses and non-profits afloat during the pandemic. According to CBS News, by early May around 9,000 Catholic parishes received funding under the first two rounds of PPP loans, to help keep employees on payroll.

Religious freedom in foreign countries is also under threat, Wenski said, from a “hard despotism” in regions such as the Middle East and China, where Christians are imprisoned, tortured, and killed for their faith.

Meanwhile, some Christian churches have been locked in court battles with state and local governments over restrictions on public gatherings during the new coronavirus pandemic. The Justice Department has said that restrictions on churches must be temporary and not single out religion for stricter limits than other gatherings such as protests or commerce.

New York City mayor Bill de Blasio justified his encouragement of mass protests against racism despite public health warnings on mass gatherings, saying that the protests “grappling” with America’s history of racism “is not the same question as the understandably aggrieved store owner or the devout religious person who wants to go back to services.”

“As Catholics, we understand the common good,” Wenski told CNA, noting that bishops suspended public Masses during the pandemic because it was understood as “a real public health threat.”

“When you see that disparate treatment, then you have to ask whether that is because of some religious animus, and that’s where we have to be very careful,” he said.

Both he and Murry ran for the position of religious liberty chair of the conference in November of 2019, to fill the vacancy left by Archbishop Joseph Kurtz of Louisville who had resigned from the position because of his bladder cancer condition.

Wenski and Murry received the same number of votes from the conference and Murry was selected as the religious liberty head because of his seniority, being two years older than Wenski.