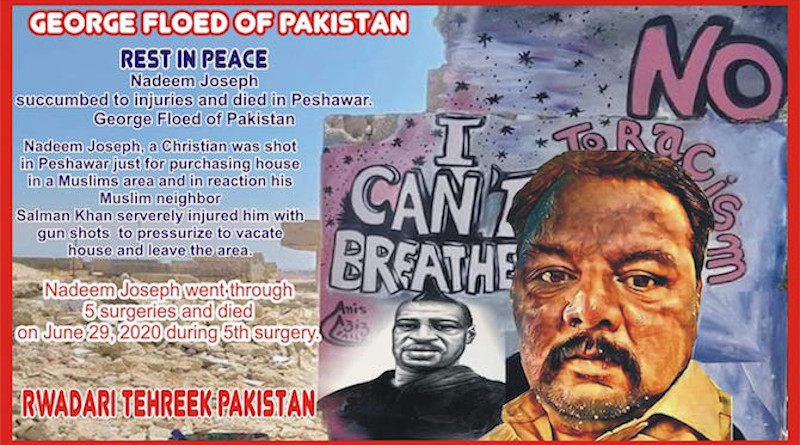 The murder of a Christian in Peshawar is being compared to the killing of a George Floyd in the US.

“George Floyd of Pakistan” is trending on social media. That’s after a Christian laboratory technician died from a gunshot wound after being shot by his Muslim neighbor in restive Khyber Pakhtunkhwa province.

“I can’t breathe” and “no to racism,” states a banner posted by Rawadari Tehreek (Movement for Tolerance) on Facebook. Portraits of Floyd — the African-American who died at police hands recently — and Nadeem Joseph are displayed side by side.

Despite the coronavirus lockdown, more than 100 mourners gathered on June 29 for the funeral of Joseph, who had recently moved with his family to TV Colony of Peshawar, the provincial capital. On June 2, drug dealer Salman Khan shot him with an AK-47 automatic rifle.

“He suffered for 20 days with a gunshot wound to the stomach. White worms crawled on his bleeding wounds. We could see his intestine,” Suleman Javed, his nephew, told UCA News.

“He had undergone five surgeries. The staff at the government hospital didn’t care to change his bandages daily. We had recently shifted him to a private health facility.”

In a video recorded from his hospital bed, the father of two recalled being harassed by Khan, who ordered his family to vacate their rented house within 24 hours. Joseph called police and was making a video of his attacker moments before the firing started. His mother-in-law was hit in her left shoulder. The family planned to buy the house.

A murder case has been registered under Section 302 against Khan, who obtained bail before his arrest. According to Jamshed Thomas, a Christian member of the National Assembly, Khan was high on drugs before the incident.

“Police have arrested a person but the murderer is still on the loose and is trying to negotiate with the family of the victim. Such unfortunate incidents are rare in the province. We are still awaiting the post-mortem report,” said Thomas.

In a video message released on social media, Khan confessed to shooting 48-year-old Joseph.“For the past 20 years, we had been living in our personal house. The son of Joseph used to ride his motorcycle very fast in our street. We stopped him from doing it and fought his family,” he said.

An iron lock hangs on the gate of the house Joseph had rented. His family, now living with relatives, are demanding justice.

“Joseph had started dealing in medical equipment and was the only breadwinner in his family. This is an open-and-shut case. We demand urgent police action,” said nephew Javed.

Human rights activists took to social media to express their anguish over Joseph’s death. Many are comparing him to George Floyd, who died in Minneapolis in May as a white police officer held a knee on his neck for nearly nine minutes. The tragedy sparked protests around the world against racial injustice and police brutality.

Anjum James Paul, a Catholic professor, tweeted a message to Prime Minister Imran Khan from the Pakitan Minorities Teachers’ Association requesting him to end Christophobia in Pakistan. “Nadeem Joseph lost his breath like George Floyd [died] without justice,” he wrote.

“Rest in peace, George Floyd of Pakistan. He died leaving so many questions about the future of Pakistani minorities being subjected to social discrimination and persecuted due to their faith,” stated Rawadari Tehreek chairman Samson Salamat in a Facebook post. “He was killed just because he was Christian, but Nadeem is not the only one. There are and were countless others who faced the worst forms of persecution.

“The only question is who will come out to save George Floyds in Pakistan. Do the lives of human beings belonging to religious minorities really matter?”

In its 2020 annual report, the United States Commission on International Religious Freedom recommended Pakistan be designated a “country of particular concern” for its systematic, ongoing and egregious violations of religious freedom.

In May, the brother-in-law of Asia Bibi was murdered in Dao Ki Mallian, a village of Punjab province. Bibi’s case shocked the world after she was convicted of blasphemy and spent eight years on death row before the verdict was overturned by the Supreme Court of Pakistan in 2018.

In February, a Christian farm laborer was tortured for washing himself in a well owned by a Muslim farmer in Bhagiana village of Punjab. He died a few days later. In 2013, Joseph lost his elderly father and niece in a suicide bomb attack at All Saints Church of Peshawar. At least 85 people were killed and more than 140 wounded when two suicide bombers blew themselves up at the historic church immediately after a Sunday service.

Church leaders blame hate material in textbooks and discriminatory laws for persistent discrimination and persecution of Christians in Pakistan.

Cecil Chaudhry, executive director of the Catholic bishops’ National Commission for Justice and Peace, recently highlighted the challenges of the community in an online talk show.

“This is an ongoing struggle. We are battling a closed mindset, nourished over decades, that doesn’t recognize our issues as problems. Our voice is still weak. Both the Church and community have their own limitations,” he said.

“The legal system discriminates us on one side while the electoral process constrains our development. Inequality and the divide in society have caused frustrations. Implementation of laws and accountability can help in bringing peace. But the government lacks will and seriousness.”

One thought on “The Killing Of Pakistan’s George Floyd”