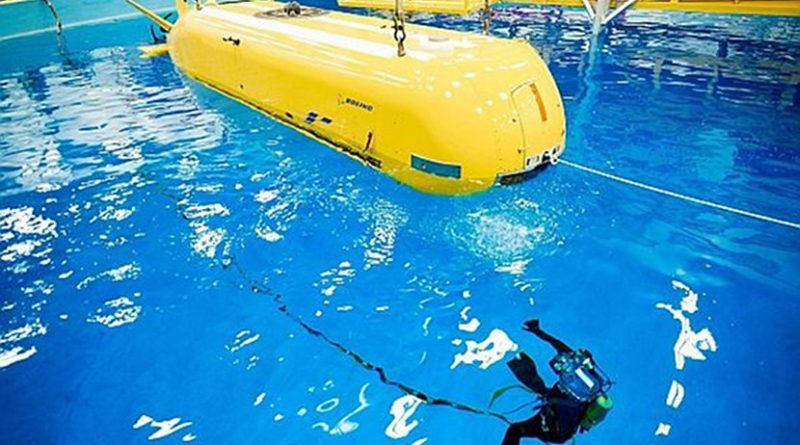 The Chinese People’s Liberation Army Navy (PLAN) is likely to acquire a new type of submarine by the early 2020s. According to the South China Morning Post, the Shenyang Institute of Automation under the Chinese Academy of Sciences (CAS) is engaged in developing a series of extra-large unmanned underwater vehicle (XLUUV) that will feature Artificial Intelligence (AI). The vessels will be capable of performing a number of tasks without “human intervention,” “handle their assignments and return to base on their own,” and carry out reconnaissance, surveillance, combat operations against enemy targets, and undertake activities such as whale tracking. It will be possible to integrate these vessels with other manned and unmanned platforms and systems at sea, in air as also on land to carry out coordinated missions.

Lin Yang, the project director and a marine technology specialist, has noted that Chinese interest in these platforms is prompted by US plans to acquire XLUUVs capable of carrying “a variety of payloads, from sensors to weapons.” Two prototype units have been contracted, one to Lockheed Martin and the other to Boeing, and they have been granted US$ 43.2 million and US$ 42.3 million, respectively for research, design, and testing in 2020. The winner will receive orders for production of up to five platforms. Unlike China and the US, Russia is developing the Status-6 autonomous torpedo capable of delivering 100-megaton warhead capable of “wiping out all living things” within a 1,500 km radius.

These developments are clear signs of the role of AI-enabled underwater platforms and weapons in the future, and add a new dimension to underwater operations. There are at least four issues concerning them that merit attention.

First is naval warfare. Navies have traditionally employed conventional submarines for intelligence gathering, laying mines, attacking enemy submarines and ships, and more recently, conducting strikes against shore targets by using land attack cruise missiles. The usual tactic for conventional submarine has been the ‘lie-in-wait’ position at the entrance to harbours or close to choke points and attack the enemy. Like their conventional counterparts, AI-enabled platforms can serve as scouts, and smaller platforms can masquerade as decoys to attract the enemy, forcing it to expose its position. If necessary, the AI-tool kit should be able to detect, track, generate high speed, and attack the enemy like a torpedo.

It is useful to mention that the US’ XLUUVs will “operate autonomously for weeks or even months, periodically phoning home to check for new orders,” giving the US Navy a significant advantage in tactical operations. Similarly, the Status-6 autonomous torpedo can be used by the Russian defence ministry’s special division for deep-sea research and deliver “deep-sea equipment or installing surveillance devices.”

Second, the XLUUVs may entail new legal challenges. There is an ongoing debate raging over regulating lethal autonomous weapon systems (LAWS), including a call to ban fully autonomous weapon systems centered on the Principle of Non-Delegation of the Authority to Kill by non-human mechanisms. A global campaign – Coalition to Stop Killer Robots – has called for an international ban on ‘killer robots’, and “a treaty for emerging weapons.” There is a belief that morality and generally accepted ethics need to be injected into the use of AI-enabled weapon systems given that “inanimate machines cannot understand or respect the value of life.” If the XLUUVs are put to combat operations, it would result in the weaponisation of AI, and this empowers humans to absolve themselves of any moral consequences of killing or using these for self-defence.

It is important to mention that engineers and scientists from the technology industry signed a pledge in Stockholm at the 2018 International Joint Conference on Artificial Intelligence (IJCAI) and called upon “governments and government leaders to create a future with strong international norms, regulations and laws against lethal autonomous weapons.” They have since been joined by corporates such as Google DeepMind, the XPRIZE Foundation, University College London, ClearPath Robotics/OTTO Motors, the European Association for AI, and the Swedish AI Society.

Third, the XLUUVs rely primarily on AI to conduct operations. These platforms would transit long distances passing through a variety of undersea topography, ie ridges, mounts, trenches, rocks, slopes and basins, and would be vulnerable to collisions, detection by civilian research and survey vessels, enemy submarines and warship, and underwater military detection systems including those used for seismic warnings. Further, underwater activity such as laying of oil and gas pipelines and fiber optic cables can impact their safety. Besides, natural occurrences such as currents and tides can result in drift and cause considerable difficulty to being positioned in the designated destination.

Fourth regards the impact of AI-enabled underwater platforms on the marine environment, particularly marine life such as whales, sharks, dolphins and other migratory species. Sonar transmissions by XLUUVs can cause potential damage to mammals’ sensory organs resulting in disorientation or death. Whales may even misunderstand sonar waves as that of an attacker, and panic can drive them towards the platform.

The development of XLUUVs presents clear dangers and could have potentially destabilising consequences for all countries. Further, their impact on marine life and the associated ecosystem – which is already witnessing stress due to pollution and plastic – does not appear to have been taken into consideration. Finally, an international treaty for emerging AI-enabled underwater platforms needs to be prepared, debated, and signed.