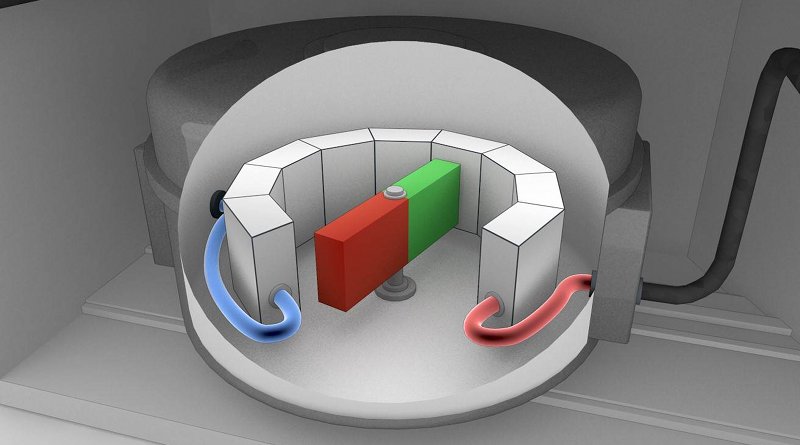 Setup of a magnetocaloric cooling system: The segments shown in gray contain the magnetocaloric material. This material is alternately heated and cooled by the rotating magnet. Because of the internal structure of the segments, heat is transferred to the ambient air on the right side while on the left heat is removed from the container to be cooled. © Fraunhofer IPM

A discovery from 1917 becomes viable for the future. A team of researchers at the Fraunhofer Institute for Physical Measurement Techniques IPM is developing efficient magnetocaloric cooling systems that make do without harmful refrigerants. The esearchers hope to achieve 50 percent of the maximum efficiency level with their process. Comparable existing magnetocaloric systems reach only approximately 30 percent.

Many research groups around the world are working on refrigerators, industrial cooling systems and air conditioners that pump heat using magnetocaloric materials (see box). The heating and cooling cycle generated by magnetization is excellently suited for cooling. Physicist Dr. Kilian Bartholomé and his team at the Fraunhofer IPM in Freiburg, Germany, are using this technology to develop an extremely efficient thermal conductivity concept which eliminates the need for environmentally damaging refrigerants.

There is great demand for innovative cooling technologies, since the conventional hydrofluorocarbons (HFCs) used today are powerful greenhouse gases. For this reason, the EU has significantly restricted the use of HFCs. There are alternatives to HFCs, such as the natural refrigerants butane and propane, which are used e.g. in domestic refrigerators. These gases are flammable, but not considered hazardous in the amounts used in household refrigerators. Still, they are not a viable option for larger cooling systems such as those found in supermarkets. The industry is working on alternative refrigerants but has yet to come up with convincing solutions.

A magnetocaloric cooling system requires no harmful refrigerants whatsoever. The researchers are using an environmentally friendly lanthanum-iron-silicon alloy as a magnetocaloric material, which heats up when a magnetic field is applied and cools down when the field is removed. Kilian Bartholomé and his team have developed and patented a special procedure for transferring the heat produced.

Bartholomé’s cooling system makes use of latent heat, i.e. the energy required by a liquid to turn into vapor. “Since water absorbs a lot of energy when it changes from a liquid to a gaseous state, we use the evaporation process to transfer the heat,” the physicist says. “This is a highly efficient means of transferring the thermal energy.”

In deciding to use the evaporation process for heat transport, Kilian Bartholomé and his colleague Jan König were inspired by heat pipes used e.g. as pipe collectors in solar power systems and for cooling computers. A heat pipe is an evacuated container, where a small amount of fluid has been enclosed. If one side of the pipe is heated, the fluid evaporates on this heated side and condenses again on the cold side. Very high heat transmission rates are achieved in the process.

The magnetocaloric heat pipe being developed at Fraunhofer IPM, however, is significantly more complex. It consists of many small chambers containing the magnetocaloric material. The alloy has a finely porous structure so that it can be optimally penetrated by the water vapor. The method for producing the porous alloy is the work of Dr. Sandra Wieland and Dr. Martin Dressler at the Fraunhofer Institute for Manufacturing Technology and Advanced Materials IFAM.

In order to even further increase efficiency, Bartholomé arranges the segments of the heat pipe in a circular pattern and places a rotating magnet in the middle. It is expected that the demonstrator will generate 300 watts of power by the time it is finished at the end of the year. By way of comparison: The compressor in a household refrigerator produces from 50 to 100 watts of power. The current system operates at a very high frequency already. The researchers in Freiburg plan to use the demonstrator to break a world record for magnetocaloric cooling systems with regard to system frequency. The long-term objective is to achieve 50 percent of the theoretical maximum efficiency level. Comparable existing systems reach approximately 30 percent.

Industry players are already expressing great interest in the research, for example Philipp Kirsch GmbH, which manufactures special refrigerators for medical laboratories, pharmacies and hospitals. The old-established German company is working together with Fraunhofer IPM in a project sponsored by the German Federal Ministry of Economics and Technology (BMWi). “We want to put a minus-86-degree unit on the market based on magnetocalorics,” says CEO Jochen Kopitzke. “Magnetocalorics has a very large disruptive potential and could be capable of replacing compressor-based cooling in the medium-term time frame. We see here a clearly developing market which we can penetrate.”

Magnetocalorics – The long road to application

Magnetization can be used to heat magnetocaloric materials, however only within a narrow temperature rangehich is specific to each material. When a magnetic field is applied at these temperatures, the magnetic moments orient themselves in the direction of the magnetic field. This generates thermal energy, heating the material.

Iron exhibits the magnetocaloric effect at approximately 750° C, and nickel at around 360° C. There is only one element that can be heated using magnetocalorics at room temperature: gadolinium, a very rare and therefore extremely expensive metal.

It wasn’t until the end of the 1990s that alloys were developed which are magnetocaloric at room temperature and which can be produced cost-effectively on an industrial scale. One of these is the lanthanum-iron-silicon alloy being used by the working group at Fraunhofer IPM.