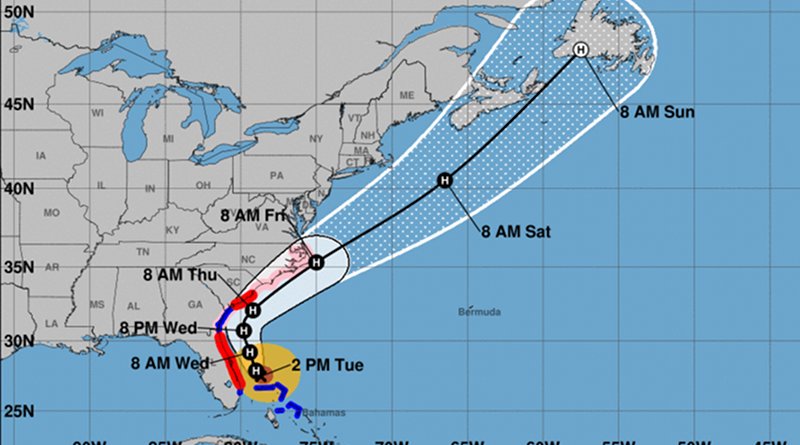 Hurricane Dorian relentlessly battered Grand Bahama Island on Tuesday, even as the powerful storm began to edge closer to the mainland U.S. in the southern state of Florida.

Dorian, packing sustained winds of 175 kilometers an hour with higher gusts, was classified as a Category 2 storm, diminished from when it first slammed into the Bahamas as a most dangerous Category 5 hurricane and stalled over the popular vacation mecca. At the same time, however, the U.S. National Hurricane Center said the storm is growing larger.

Forecasters continued to describe Dorian as “extremely dangerous” as it moved northwestward toward the Florida coast at 4 kilometers an hour. Forecasters predicted Dorian would advance “slightly faster” later Tuesday before turning northward along the country’s eastern seaboard by Wednesday night.

The hurricane agency said that with its expected path, Dorian would track “dangerously close” to the Florida coast on Tuesday night, advancing northward very near the Georgia and South Carolina coasts by Wednesday night and Thursday, and the North Carolina coast by late Thursday.

Bahamians experienced another hellish night as Dorian’s center sat stationary on the northern edge of Grand Bahama Island and pounded the area with fierce winds and the flooding effects of heavy rains and storm surge.

Dorian made landfall on the island late Sunday night and barely moved throughout the day Monday. Storm surges of more than four meters above normal tide levels inundated houses, and authorities said the winds toppled or damaged thousands of homes.

“We are in the midst of a historic tragedy in parts of northern Bahamas,” said Prime Minister Hubert Minnis. “Our mission and focus now is search, rescue, and recovery. I ask for your prayers for those in affected areas and for our first responders.”

He told reporters at a Monday news conference there were five confirmed deaths on Abaco Island, where Dorian struck before moving to Grand Bahama. Minnis said initial reports from Abaco were of devastation that is “unprecedented and extensive.”

What the storm did to Grand Bahama will become clearer as it moves away and authorities are able to survey the island.

“We know that there are a number of people in Grand Bahama who are in serious distress and we will provide relief and assistance as soon as possible after the Met [Meteorology] Department has given the all clear,” Minnis said. “I strongly urge the residents of Grand Bahama to remain indoors and be as safe as possible until the all clear is given by the appropriate authorities.”

Hurricane warnings are posted from just north of Miami to the Florida-Georgia border. Millions of people from Florida to South Carolina have been ordered to evacuate.

A National Guard spokesman says there has been almost no resistance from people being told they have to get out.

“People do understand that Dorian is nothing to mess around with,” he said.

Even if Dorian does not make landfall on the Atlantic Coast, the storm’s hurricane-force winds extend 95 kilometers to the west from the storm’s eye, with tropical storm-force winds extending outward up to 280 kilometers. Towns and cities can still expect up to 25 centimeters of rain, life-threatening flash floods, and the possibility of tornadoes.

Jared Moskowitz, the director of the Florida Division of Emergency Management, said, “Hurricane Dorian is the strongest storm to ever threaten the state of Florida on the East Coast. No matter what path this storm takes, our state will be impacted.”