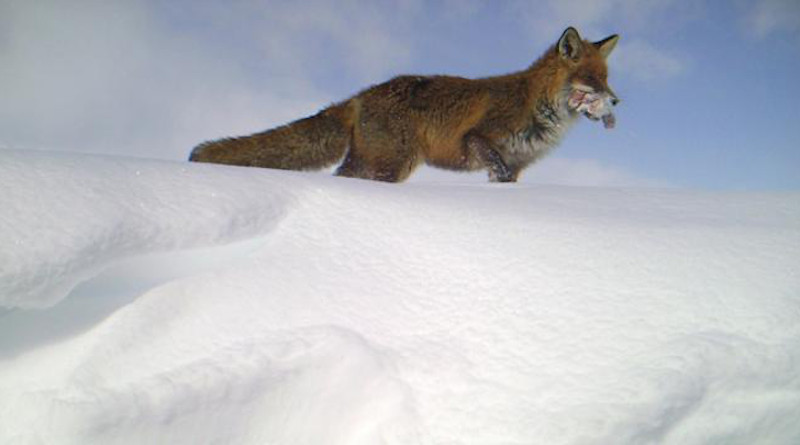 The density of red foxes is increasing in Norway's mountainous areas. The more trash and food waste red foxes have access to, the greater their numbers. This photo was taken with a game camera and shows a red fox that has found food. CREDIT: NINA, game camera

Animal species that are at home in the high mountains are finding their habitats reduced and fragmented by roads. In addition, they face competition from scavengers from lower boreal areas that find their way to the mountains.

“More cabins, more tourism and increased car traffic means more litter and more roadkill. For the red fox, the crow and other scavengers, it means more tempting food,” says Lars Rød-Eriksen, who is employed as a researcher in terrestrial ecology at NINA, the Norwegian Institute for Nature Research.

In his doctoral work at the Norwegian University of Science and Technology (NTNU), Rød-Eriksen surveyed road segments at Dovre, Saltfjellet and Hardangervidda to learn how wildlife is affected by the highways.

“We found that the red fox uses the road both to find food and to move from place to place. Especially in the winter, using the roadways is easier than travelling across the snowy terrain,” he says.

“Using tracks in the snow and game cameras, we were able to document that the density of red foxes increases the closer to the road one gets. The more litter and food waste they have access to, the greater the number of red foxes that find their way to the area.”

Small rodents are the Arctic fox’s specialty fare, but it isn’t “too fussy” to eat trash. In competing with the red fox, however, it falls short.

“The Arctic fox is also attracted to roads, but the red fox is bigger and dominates in the competition between the species. There are also examples of red foxes that have killed Arctic foxes. Increased access to food enables the red fox to establish itself in the high alpine zone. The search for food is especially intense in late winter,” Rød-Eriksen says.

The crow is both a competitor and a useful helper for the fox. Often crows are the first to discover a treat, but foxes are observant and use the crows to guide them to where the food is.

Unwelcome in the mountains

“The red fox has existed in the mountains before. But it’s an invasive species and can disrupt the natural alpine ecosystem if it establishes itself there permanently, like it seems to be doing now. The Arctic fox is already an endangered species, and it seems likely that the red fox is impacting other alpine species as well, such as ptarmigan, that are ground nesters. We call it a cascade effect when several species are affected,” says Rød-Eriksen.

How about a litter law?

“Information campaigns can inform people about the consequences of throwing out and leaving trash and food scraps behind. A lot of people probably don’t give any thought to how littering can negatively impact wildlife. Other countries have stricter legislation against littering. Maybe Norway should also consider it. Personally, I think it would be effective,” says Rød-Eriksen.

To record the movements of red foxes and Arctic foxes during the winter, Rød-Eriksen used tracking, supplemented by a game camera with bait at different distances from the road. These methods yielded good and reliable findings.

Summertime proved more difficult. The crows found the prey before the fox and often managed to eat it before the fox could get to it. Rød-Eriksen also placed artificial bird nests containing a real quail egg and a fake egg made from modelling clay along the transects.

The idea was that bite marks in the fake, soft egg would reveal whether a fox or a crow had tried to eat it. Here too, the crow created problems that made the results less reliable during the summer. Rød-Eriksen plans to take a closer look at seasonal variations and more comparable methods in future studies.