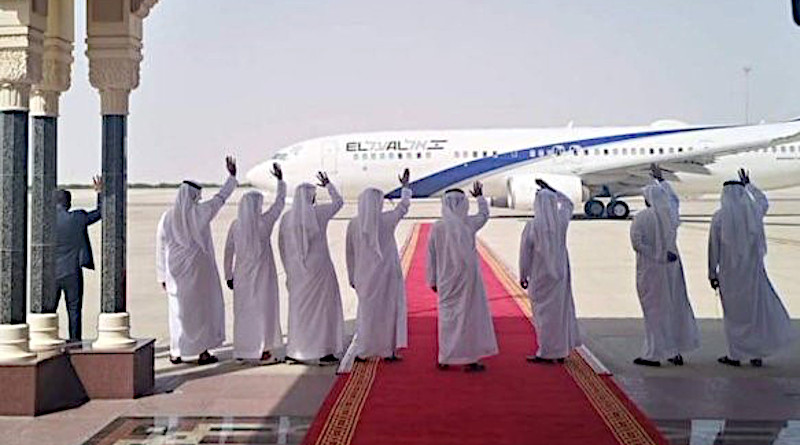 Tolerance, both as a term and as a concept, is a commodity that has made strong headway over the past few years in the Gulf — a region more than often criticised for its social, political and cultural rigidness that also reflect in the laws of the land there.

By Navdeep Suri and Kabir Taneja

As an Israeli El Al flight made history from Tel Aviv to Abu Dhabi on 31 August with Jared Kushner, leading top US and Israeli officials and business leaders, some of its distinguished passengers tweeted photos of Satchel bags emblazoned with the title ‘The Abraham Accord.’ The title of the tripartite agreement announced on 13 August in Washington DC, Tel Aviv and Abu Dhabi is symbolic in more ways than one. Abraham, after all, is revered as a prophet in Islam and also as a patriarch for both the Jewish and the Christian faiths. By calling their agreement the Abraham Accord, the parties are trying to signal their intent of rising above centuries of blood feuds that the Christian, Jewish and Muslim descendants of Abraham have put on display. It signals, at least in terms of optics, a desire to shift the narrative from religious conflict to tolerance.

Tolerance, both as a term and as a concept is a commodity that has made strong headway over the past few years in the Gulf, a region more than often criticised for its social, political and cultural rigidness that also reflect in the laws of the land there. Gulf countries, especially Saudi Arabia, have over the years developed a poor reputation globally for being home to radical Islam, social archaisms, brutal punishments, intolerance, anti-women’s rights and so on. However, there are clear indications that change is in the air and it is arriving on two separate tracks — the first advocating a pro-active approach to promoting interfaith harmony and the second showing an implacable opposition to all forms of radical or extremist ideology in Islam. For example, the recent decree by the Saudi Islamic Affairs Ministry to limit mosques in Riyadh to not broadcast religious lectures or lessons over loud speakers, and keeping the volume of said speakers at a lower level, is one such case in point.

In 2017, Sheikh Nahyan bin Mubarak Al Nahyan was announced as the UAE’s first Minister of Tolerance, to lead the state’s National Tolerance Programme. Over the next subsequent years, the UAE hosted the Pope in 2019, and announced the construction of the first Hindu Temple, and perhaps much more importantly, its first Jewish Synagogue as part of the House of Abraham — a multifaith complex that will host a mosque, a church and a synagogue within the same compound in Abu Dhabi. The state also allowed much more liberalised approach towards other religions and allowing their practice via cultural groups and community centres.

With the UAE’s success under its leader Mohammed bin Zayed Al Nahyan, the Saudi Crown Prince and heir in waiting, Mohammed bin Salman, has also highlighted changes in the conservative country’s outlook. Taking cues, albeit cautiously, from the UAE’s examples, Saudi Arabia allowed driving for women in 2017, warding off criticisms from the country’s fairly powerful conservative lobby. Music concerts and films are back and a recent decree that appoints 10 women to senior positions in the administration of the holy mosques of Mecca and Medina was also announced.

The Covid-19 pandemic showcased a shift away from the conservative manner in which a kingdom such as Saudi Arabia governs itself when it comes to matters of religion. In June, Riyadh announced the cancellation of the annual Hajj pilgrimage, risking a significant backlash from the Muslim community around the world. This perhaps helped in curtailing what could have become the Arab world’s ‘super spreader’ event. Saudi’s neighbour, the UAE, also exercised great restraint in curtailing the number of cases in its large centres such as Dubai and Abu Dhabi, especially when it came to shut down mosques and other religious sites and seminaries.

These are major steps that reflect a fundamental shift in mindset that did not occur overnight. The terror strikes of 9/11 by Al Qaeda almost two decades ago were probably the starting point of the change, particularly for the Emiratis. The fact that three of the hijackers were a product of their own affluent society was like a wake-up call and they began to quietly address the crisis of radicalisation, not within just their own borders, but also within the larger region itself — an exercise that demanded a large dose of political courage and tact.

The UAE’s strict approach against radicalisation and political Islam within its borders was not going to be easy because at least two of the country’s seven emirates had a relatively soft attitude on the subject. Moreover, an entrepot like Dubai thrived on its ‘no-questions asked’ approach towards financial dealings, including by politico/religious groups of various hues. But Abu Dhabi has shown its resolve and the approach is now beginning to show results. After the ‘Arab Spring’ brought forth a Muslim Brotherhood (MB) led government in Egypt, UAE quietly deported thousands of Egyptian preachers as well as teachers who were seen to have affiliations with the MB. It also banned MB linked Al Islah group and declared the Brotherhood as a terror organisation.

Going a step further, the state has taken firm control over Friday sermons which are now standardised across the state, taking away power from individual mullahs to preach on radical or regressive or politically charged themes. In fact, even Egypt, home of the Muslim Brotherhood, has taken to this practice. The UAE also hosts centres such as Hedayah and Sawab, with the former being a premier institution to develop counter-radicalisation and violent extremism narratives while the latter, a joint programme between the UAE and US, works on countering radicalisation on the internet. It is pivotal to note here that arguments around restricting political Islam rarely make an appearance when talking about Islamist radicalisation and how to counter it in India even though this is a critical point of counter-terror designs.

A societal re-design of this magnitude is bound to attract challenges, and these will be in evidence as Abu Dhabi gets ready to host the embassy of the Jewish state. One major challenge comes from the willingness of influential regional players like Turkey and Qatar to become the torchbearers for political (Sunni) Islam. Both have provided an alternate base for Muslim Brotherhood leaders ousted by Egypt, UAE and Saudi Arabia. Doha has also hosted Islamist leaders such as former Hamas leader Khaled Al Mashal and firebrand Egyptian cleric Yusuf al-Qaradawi. In fact, the rift between Saudi Arabia, UAE and Qatar in the Gulf Cooperation Council came from both Riyadh and Abu Dhabi’s apprehensions of Qatar’s support for various Islamist groups and the use of Al Jazeera Arabic to promote their radical agenda.

It is important to note that these developments in India’s near neighbourhood are of profound significance for India. For almost half a century, the Wahhabi clergy of Saudi Arabia was a fountainhead of conservative Islamic ideology in its most regressive form. As that begins to give way to a more tolerant and progressive approach, its impact will be gradually felt across Muslim communities in South Asia. We have a stake in the success of the tolerance agenda being promoted by countries like UAE in the Gulf, even as India looks to address a rising tide of intolerance itself.

Home » Returning To Abraham’s Fold: Tolerance In The Gulf – Analysis