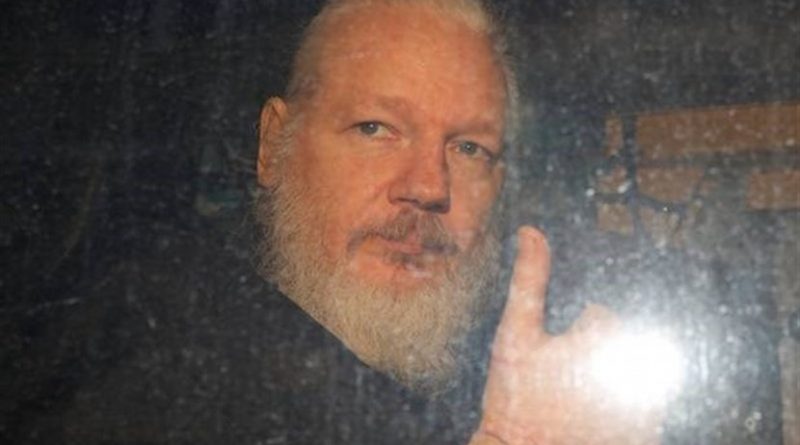 On September 7, 2020, Julian Assange will leave his cell in Belmarsh Prison in London and attend a hearing that will determine his fate. After a long period of isolation, he was finally able to meet his partner—Stella Moris—and see their two sons—Gabriel (age three) and Max (age one)—on August 25. After the visit, Moris said that he looked to be in “a lot of pain.”

The hearing that Assange will face has nothing to do with the reasons for his arrest from the embassy of Ecuador in London on April 11, 2019. He was arrested that day for his failure to surrender in 2012 to the British authorities, who would have extradited him to Sweden; in Sweden, at that time, there were accusations of sexual offenses against Assange that were dropped in November 2019. Indeed, after the Swedish authorities decided not to pursue Assange, he should have been released by the UK government. But he was not.

The day after Assange’s arrest, the campaign group Article 19 published a statement that said that while the UK authorities had “originally” said they wanted to arrest Assange for fleeing bail in 2012 toward the Swedish extradition request, it had now become clear that the arrest was due to a U.S. Justice Department claim on him. The U.S. wanted Assange on a “federal charge of conspiracy to commit computer intrusion for agreeing to break a password to a classified U.S. government computer.” Assange was accused of helping whistleblower Chelsea Manning in 2010 when Manning passed WikiLeaks—led by Assange—an explosive trove of classified information from the U.S. government that contained clear evidence of war crimes. Manning spent seven years in prison before her sentence was commuted by former U.S. President Barack Obama.

While Assange was in the Ecuadorian embassy and now as he languishes in Belmarsh Prison, the U.S. government has attempted to create an air-tight case against him. The U.S. Justice Department indicted Assange on at least 18 charges, including the publication of classified documents and a charge that he helped Manning crack a password and hack into a computer at the Pentagon. One of the indictments—from 2018—makes the case against Assange clearly.

The charge that Assange published the documents is not the central one, since the documents were also published by a range of media outlets such as the New York Times and the Guardian. The key charge is that Assange “actively encouraged Manning to provide more information and agreed to crack a password hash stored on U.S. Department of Defense computers connected to the Secret Internet Protocol Network (SIPRNet), a United States government network used for classified documents and communications. Assange is also charged with conspiracy to commit computer intrusion for agreeing to crack that password hash.” The problem here is that it appears that the U.S. government has no evidence that Assange colluded with Manning to break into the U.S. system.

Manning does not deny that she broke into the system, downloaded the materials, and sent them to WikiLeaks. Once she had done this, WikiLeaks, like the other media outlets, published the materials. Manning had a very trying seven years in prison for her role in the transmission of the materials. Because of the lack of evidence against Assange, Manning was asked to testify against him before a grand jury. She refused and now is once more in prison; the U.S. authorities are using her imprisonment as a way to compel her to testify against Assange.

What Manning Sent to Assange

On January 8, 2010, WikiLeaks announced that it had “encrypted videos of U.S. bomb strikes on civilians.” The video, later released as “Collateral Murder,” showed in cold-blooded detail how on July 12, 2007, U.S. AH-64 Apache helicopters fired 30-millimeter guns at a group of Iraqis in New Baghdad; among those killed were Reuters photographer Namir Noor-Eldeen and his driver Saeed Chmagh. Reuters immediately asked for information about the killing; they were fed the official story and told that there was no video, but Reuters futilely persisted.

In 2009, Washington Post reporter David Finkel published The Good Soldiers, based on his time embedded with the 2-16 battalion of the U.S. military. Finkel was with the U.S. soldiers in the Al-Amin neighborhood when they heard the Apache helicopters firing. For his book, Finkel had watched the tape (this is evident from pages 96 to 104); he defends the U.S. military, saying that “the Apache crew had followed the rules of engagement” and that “everyone had acted appropriately.” The soldiers, he wrote, were “good soldiers, and the time had come for dinner.” Finkel had made it clear that a video existed, even though the U.S. government denied its existence to Reuters.

The video is horrifying. It shows the callousness of the pilots. The people on the ground were not shooting at anyone. The pilots fire indiscriminately. “Look at those dead bastards,” one of them says, while another says, “Nice,” after they fire at the civilians. A van pulls up at the carnage, and a person gets out to help the injured—including Saeed Chmagh. The pilots request permission to fire at the van, get permission rapidly, and shoot at the van. Army Specialist Ethan McCord—part of the 2-16 battalion that had Finkel embedded with them—surveyed the scene from the ground minutes later. In 2010, McCord told Wired’s Kim Zetter what he saw: “I have never seen anybody being shot by a 30-millimeter round before. It didn’t seem real, in the sense that it didn’t look like human beings. They were destroyed.”

In the van, McCord and other soldiers found badly injured Sajad Mutashar (age 10) and Doaha Mutashar (age five); their father, Saleh—who had tried to rescue Saeed Chmagh—was dead on the ground. In the video, the pilot saw that there were children in the van; “Well, it’s their fault for bringing their kids into a battle,” he says callously.

Robert Gibbs, the press secretary for President Barack Obama, said in April 2010 that the events on the video were “extremely tragic.” But the cat was out of the bag. This video showed the world the actual character of the U.S. war on Iraq, which the United Nations Secretary-General Kofi Annan had called “illegal.” The release of the video by Assange and WikiLeaks embarrassed the United States government. All its claims of humanitarian warfare had no credibility.

The campaign to destroy Assange begins at that point. The United States government has made it clear that it wants to try Assange for everything up to treason. People who reveal the dark side of U.S. power, such as Assange and Edward Snowden, are given no quarter. There is a long list of people—such as Manning, Jeffrey Sterling, James Hitselberger, John Kiriakou, and Reality Winner—who, if they lived in countries being targeted by the United States, would be called dissidents. Manning is a hero for exposing war crimes; Assange, who merely assisted her, is being persecuted in plain daylight.

On January 28, 2007, a few months before he was killed by the U.S. military, Namir Noor-Eldeen took a photograph in Baghdad of a young boy with a soccer ball under his arm steps around a pool of blood. Beside the bright red blood lie a few rumpled schoolbooks. It was Noor-Eldeen’s humane eye that went for that photograph, with the boy walking around the danger as if it were nothing more than garbage on the sidewalk. This is what the U.S. “illegal” war had done to his country.

All these years later, that war remains alive and well in a courtroom in London; there Julian Assange—who revealed the truth of the killing—will struggle against being one more casualty of the U.S. war on Iraq.

This article was produced by Globetrotter, a project of the Independent Media Institute.