The beauty of the post cold war international relations is that a country can have relations with many countries at a time. India’s relation with France is one of the important among the various relations that India enjoys with other major powers of the world. India’s relations with France are also affected in a significant way by the post cold war developments. These developments have compelled India and France to strengthen the partnership and play a more proactive role in regional and world affairs.

The significance of this relationship lies in their commitment to live up to their claims, even if not with cent percent sincerity and success. Today, India and France stands at a threshold of significant gains out of this maturing partnership. It is the common interests and the mutual desire that have been the main driving force behind this partnership.

The recent short-listing of the European Typhoon and French Rafale for $10 Billion Multirole fighter Aircraft by the Indian defence ministry was a significant move toward strengthening the ongoing strategic partnership between India and France that has started burgeoning since 1998. France constant support for India to play a major role in the world by supporting India’s candidature for Permanent Member status in the UN Security Council and the short-listing of Rafale reflects the undue importance that both sides attach to this booming partnership.

However, the relationship has gained strategic character during the visit of France President Chirac to India for three days from 24-26 January 1998. Since then there has been a regular high-level official visits from both sides reflecting the importance of the strategic partnership. The successive visits by Indian Prime Minister Manmohan Singh and the French President Chirac in September 2005 and February 2006 reaffirmed the strategic character of the partnership that has both regional and global repercussions.

The common interests which both countries share has been the main driving force behind the maturing strategic partnership. India and France have developed a common understanding on the emerging world order and the serious challenges facing the world and how to respond to these challenges. Both countries believe in working closely for the safety and security of the world. Their main areas of common interests includes:

India and France have a common stake in the quest for a multi-polar world. Both countries have work together for more power centers and are against the bipolar structure that existed during the cold war period. India and France have both protested against the U.S. or any super power dominance in the world. They are of the view that multipolar world can ensure world peace, security and stability rather than unnecessarily drawing countries into war caused by the ambitions of the bloc leaders.

During his visit to India in January 1998, France President Jacques Chirac has called on India for ‘Let us build an ambitious partnership on our capital of mutual regard and interest. Let us unite our effort in building a multipolar world that the Indian and the French want to be harmonious and just.”

Commitment to Fighting and Eradicating the Menace of Terrorism.

India and France share a huge stake in the fight against terrorism that constitutes one of the most serious threats to international peace and security. India has for the last many decades been the victim of terrorism that has been abetted by outsiders. With growing sensitivity of the issue, India and France during the last one decade has developed a close understanding on the need to eradicating the menace of terrorism. Both sides have formulated and executed common strategies against the growing menace of terrorism.

In a bid to strengthen the cooperation on fighting terrorism, both sides have concluded an extradition treaty in January 2003. France support to India in the fight against terrorism can be reflected from the fact that after the Mumbai attack on August 2003, French Foreign Ministry condemned the attacks and pointed out that “this attack emphasizes once again the need for a constant and determined fight against terrorism. No reason, nothing can justify the attacks.” Both the sides accept that there is a growing need to coordinate and intensify bilateral, regional and global cooperation to combat terrorism in a sustained and comprehensive manner.

Ensuring Peace, Stability and Security in the World.

Although India and France are not located in close proximity to each other but share a close understanding on the need to ensure peace, stability and security in a highly fragile world. This commitment has also brought the two countries closer to one another. France and India reiterated their determination and confirmed their commitment to work together towards peace and global security such as regional crises, terrorism, climate change, Sea Piracy, drug trafficking and proliferation of weapons of mass destruction and their delivery systems, as well as to promote arms control and global disarmament.

Defence and security cooperation forms an important aspect of the maturing strategic partnership between India and France. According to Dominique Girard, France’s ambassador to India, the ‘strategic partnership that the two countries have forged with one another must be based on sound and coordinated defence systems’.

With France, we have a formal defence agreement, security dialogue, active annual cooperation plans, military courses and last but not the least military exchange programme. India’s defence and military engagements with France is aimed at creating a stable and peaceful security environment in the region and the world while enhancing own defence capability to ensure internal and external security of the nation. This will also promote defence and military interoperability.

Since for the last many years, the Indian navies and air force were regularly holding Varuna and Garuda series of exercises regularly on an annual basis. In a follow up to this the armies of the two countries will also hold a joint combat exercise called Shakti by the end of this year in North India. This was confirmed during the visit by French Army Chief General James Martial Irastorza to India on January and February this year. With every passing year, the exercises involving all the three branches have gained scope and complexity. Since 2002, the French nuclear powered aircraft carrier Charles de Gaulle regularly participates in Varuna series of exercises.

Arms supply also forms an important aspect of this expanding defence and security cooperation. France has today emerged as one of the most important country for India in terms of supplying arms and equipment needs for India. What make France an important partner is because unlike U.S. and Russia, France is the only country that have committed to India that it would not supply advanced arms and equipment systems to Pakistan, arch rivals of India. This reflects the point that how much France is committed to strengthening the partnership with India. France very well understands the security challenges India are facing at present. France has equipped India with light AMX tanks, Mirage aircraft, etc. It was during the recent visit of Gerard Longuet, French Defence Minister to India, the minister has assured India of not supplying heavy military hardware to Pakistan, only those has been supplied which is meant for interception and electronic purposes to fight against terrorists. France offers of an advanced technology market especially for the Indian Air Force and Indian Navy would make it a reliable partner in the long-term perspective. That does not mean our relationship with the U.S. and Russia is less important. 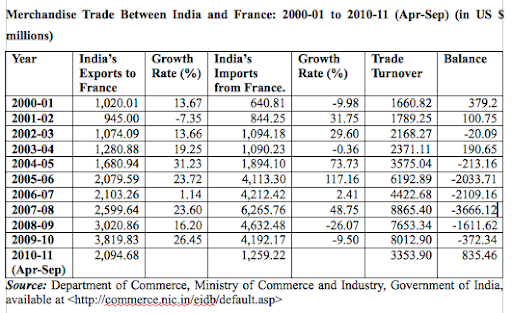 Economic, Trade and investment cooperation between India and France is not satisfactory. This can be reflected from the fact that India and France are among the world’s largest economies of the world. The present economic interaction between the two countries is not commensurate with its intrinsic economic capacity. France is ranked 5th in the list of India’s trading partners among European Union countries (after the Germany, UK, Belgium, and Netherlands).

France Support to India in UNSC

France has provided constant support to India’s inclusion as the permanent member in United Nations Security Council (UNSC). France support to India can be seen in the light of the common concerns that both countries share about a better-balanced world. France strongly believe that India in UNSC is long overdue and supporting India’s quest for a permanent membership of the UN Security Council would have the added advantage of bringing India back to the multilateralist fold.

During his visit to India, French Chief of Defence Staff Admiral Edouard Guillaud had said, “We have always stated that unilateral use of force is shortest way to fail. Obtaining United Nations resolution is a rule and this why we have pleaded, and we plead and we go on pleading for the reform of the United Nations Security Council.” He further added that

“In order to strengthen this legitimacy and for the very same reason, we strongly support the admission of India as a permanent member of the United Nations Security Council.”

France has become an important strategic partner for India and vice versa and will continue to be in the coming decades. Going by the current trend, the future of India-France relations holds great prospects. The strength of this partnership lies in identifying the areas of common interests and resolving the divergences. To realize the full potential of this partnership, India and France together would needs to embark on a sustained and simultaneous engagement on areas of common interests while identifying others areas of cooperation.

It is very important that both sides attach top most priority to this partnership. This would mean giving high priority in foreign policy formulations of both countries. And any further strengthening of the relations would require strong political commitment.

It is also highly recommendable for both countries that:

a. Continue to hold dialogue at the strategic, economic and in all other areas.

b. Increase the frequency of high-level official visits that is consistent with the maturing strategic partnership.

d. Explore more and more areas of strategic cooperation where there is significant untapped potential.

e. Refrain from taking any steps that would hurt the interest of other.

(Mohammad Samir Hussain is a Research Associate in the Yashwantrao Chavan National Centre of International Security and Defence Analysis, University of Pune, Pune. He can be reached at [email protected]).

Home » India And France Toward An Enduring Strategic Partnership – Analysis