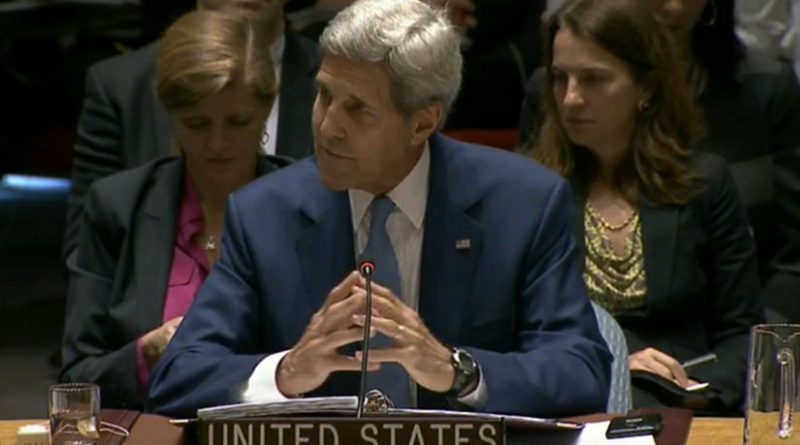 By John Kerry, US Secretary of State

(United Nations Headquarters, New York City, October 2, 2015) — Mr. Secretary-General and distinguished ministers and friends, Libyan political leaders, Bernardino Leon, thank you for your terrific efforts and those of everybody who’s been negotiating away. This is a very important meeting. This is a very important moment. And we’re here because we have a shared interest in peace for Libya and in security for the broader region.

And I’m sitting next to my friend from Egypt, Sameh Shoukry. We’ve talked many times in the last months about the impact of what is happening in Libya on the region, on its neighbors. And we’re living in a world with too much conflict, too many places where states are either failing or are failed, and the world is wondering whether or not multilateral institutions or any of us in positions of leadership have an ability to be able to make a difference.

Here there is an opportunity to make a difference immediately and have an impact. For years, we have worked with the Libyan people to foster the establishment of a society with effective and accountable political, economic, and security institutions. But institutions cannot meet the needs of their citizens in the absence of fundamentals: safety, security, the rule of law. And there can absolutely be no security without unity.

And that is why I’m encouraged to see so many of Libya’s neighbors, friends, and partners in this room. We come together to endorse the progress that Libya’s leaders have made in negotiating a political framework for a new Government of National Accord. And that accord not only can but it may be the only way to provide a way forward for Libya, and I hope everyone will join in and contribute our best to this effort.

Libya’s a small country – six and half million people or so – with enormous resources at its disposal. It should be possible with those level of resources and that size of a country for every person to have a piece of the pie. But if individual militias or individual leaders keep fighting for something other than Libya’s interests, it will only help ISIL, and that is exactly what we are seeing happen. So it’s critical for people to come together and shut down the possibility of extremists filling a vacuum. And there’s been a vacuum for too long.

As we all know, this process has been filled with difficulties and setbacks. And the simple reality is that we are here at a moment when we cannot afford any more delays. It’s imperative that all parties work to approve the final framework and fill the leadership positions for that government as soon as possible. And negotiation of the text is complete. The document is well balanced. It addresses the most basic aspirations of the Libyan people.

So I urge all Libyan leaders, especially those gathered here, to take one more courageous step for the people who suffer the most, the people on the ground in Libya, and come together and agree that those who will head this new government – a government that must be representative, stable, inclusive – will take hold and start to define the future of this country.

Let me reiterate – and I think everybody understands this: There is no time to waste. We all know the threats that further hesitation will bring. Libya has already suffered economically, socially, and politically, and its people have been hurt terribly. They deserve better, and the path is open for them to now achieve better. But each party has to live up to the responsibility of this critical moment, and that means reaching agreement on the names of new leaders not tomorrow, not next week, but now – even while Libyan delegates are here in New York. This can happen. And we hope that the process can be completed within a very small number of days.

Our special envoy, Jonathan Winer, has been working at this every step of the way with Bernardino, with others, and I think this could be a victory for multilateral effort if we all seize this particular moment.

Ultimately, it’s Libya and Libyans who will determine their own future. We know that. But the international community does have an ability to help. And Libyan leaders I hope will understand – and I’ll repeat it here: If they make the right decisions, if they come together, if they forge a true government of national unity, and if they begin to govern as their people need them to govern, we, the international community, will be behind them and beside them each and every step of the way. They can count on that.

So my colleagues, the question that Libyans face as nation in the coming months really couldn’t be any more important. Now, I just asked, what do a doctor in Benghazi, and a mother with young children in Zintan, and an engineering student in Misrata, and a grandfather from Sebha have all in common? What kind of constitution is going to help each of them live in peace and provide prosperity for their families? What are the rights and responsibilities that define Libyans as citizens and the future that they want to shape together?

These questions need answers that only Libyans can provide. And one thing is crystal clear: They do not need more internal violence, political bickering. They need to begin together to build a true nation – rebuild – and a stable nation, and a united and an optimistic nation, and a nation that can make all Libyans and will make all Libyans proud.

And to that very, very worthy end, the United States and all of us involved in diplomacy will continue to do everything that we can to help. Thank you.