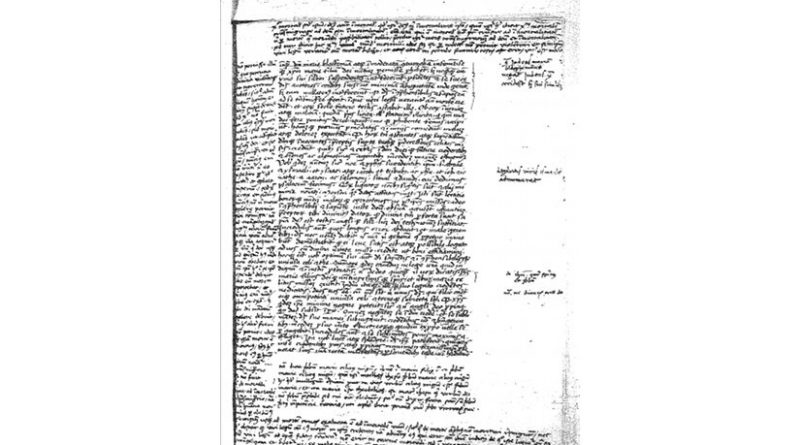 José Martínez Gázquez, emeritus professor of the UAB’s Department of Sciences of Antiquity and the Middle Ages, has identified a new set of annotations and commentaries made by German philosopher and theologian Nicholas of Cusa (1401-1464), in the margins of the manuscript Vaticano Latino 4071 in the Vatican Apostolic Library, following his reading of a Latin Koran.

The discovery is an important one as it shows the Cardinal’s interest in giving theological support to the “geopolitical” strategy of Pius II towards Islam. To this end he read the Koran carefully and thoroughly, and went on to make these glosses: attributable to him from their content and paleographic features.

The discovery has been announced in the Pontificia Università Antonianum, published in the journal “Medieval Encounters”, and presented in greater detail in the 52nd International Conference of the Centro Italiano di Studi sul Basso Medioevo Accademia Tudertina, dedicated to “Nicolò Cusano. L’uomo, i libri e l’opera”, held from 11 to 14 October in Todi, Italy (the town where Nicholas of Cusa died in 1464.

From a young age, Cardinal Nicholas of Cusa took a great interest in Islam and the relationships between religions. He wrote three fundamental works on Islam: De pace fidei, dated September 1453 (Fall of Constantinople on 29 May 1453), his letter to Juan de Segovia on 29 December 1454 and the Cribratio AlKorani of 1460/61.

Nicholas of Cusa directed all his intellectual energy towards writing the latter of these, reading the Koran carefully and thoroughly and making his customary notes as he read. And the end result of all this reading is the glosses written in his hand in the margins of the manuscript Vaticano Latino 4071, in the Vatican Apostolic Library, in the years 1459 to 1460. This is a different set to the well-known glosses of MS. 108 in the library of the St. Nikolaus Hospital in Bernkastel-Kues, and its discovery will give us a better understanding of Nicholas of Cusa’s thinking on Islam and the arguments he used to discredit the Koran in favour of the truths of the Christian gospel. Nicholas of Cusa’s work shows a hostility to the doctrine of the Koran and the Moslem way of life that was typical among Christians all through the Middle Ages and the Modern Age.

Referring to the process by which he made the discovery, Martínez Gázquez stresses that “identifying Nicholas of Cusa’s glosses shows once more how rewarding it is to go back to the manuscripts and read the texts directly, as they still keep innumerable secrets but are generously willing to reveal these to anyone who is prepared to approach them with patience, hard work and rigour, without taking the easy path of repetition and commonplaces”.

Professor Martínez Gázquez leads the Islamo-Latin inter-university research group, which studies how Islam was perceived in Christian Europe by analysing and editing the Latin translations of the Koran and Latin literature of controversy. This can provide an insight into the friction between Christian Europe and the Moslem world in the Middle Ages and the Modern Age.