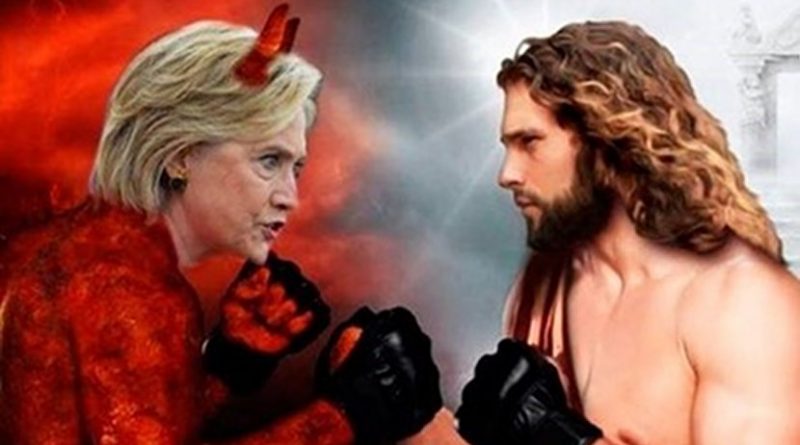 "Hillary Clinton versus Jesus". Detail of a "Russia-linked" ad.

Now we can see why they initially tried to keep a lid on the content of the infamous “Russia-linked” social media advertisements.

While grilling representatives of Google, Facebook, and Twitter, the Senate Intelligence Committee released a number of social media ads they claim were taken out by “Russia-linked” accounts for the purpose of interfering in the US electoral process.

The ads were supposed to have swayed Americans away from Hillary and toward Trump…or undermined our confidence in democracy…or…well something bad!

But the truth is they were so strange and even funny (see above) that one might be led to believe someone is having a giant joke on everyone who is pushing the “Russia meddled” story.

This was a sophisticated Russian operation targeting the American electoral system?

But the absurdity of the claim is unfortunately lost on a few dead-enders, namely a majority of the US Congress and seemingly all of the mainstream US media.

To these two groups, the following seemingly-unrelated advertisements taken out on social media were clearly part of an extraordinarily well-planned and successful Russian intelligence operation to massively sway American public opinion.

These Facebook ads, like several others that had emerged in news reports over the past several weeks, had the apparent goal of needling America’s cultural sore spots. …

Three ads from a group called “Stop All Invaders” showed photos of woman wearing an Islamic religious head-covering, along with calls to action to stop the spread of sharia law. “All face covering should be banned in every state across America!” read one ad, which had been shared more than 4,300 times and drummed up 14,000 likes alone.

Another Facebook ad promoted a “Down With Hillary!” rally in July 2016 outside Clinton’s campaign headquarters in Brooklyn. The ad was targeted to Facebook users, 18 to 65 years old, who had declared interest in Donald Trump or Donald Trump Jr. and lived within 25 miles of New York City.

Yet another ad targeted the other end of the political spectrum with the creation of a “Black Matters” community page, mimicking the language of the popular Black Lives Matter movement.

This is how the Russian government got Trump in power? Paying for anti-Sharia ads, paying for ads promoting Donald Trump to Donald Trump voters, and creating a “Black Lives Matter” support page highlighting police brutality in black communities? That’s what they did?

Again, Americans should be laughing at such nonsense. But not Congress. They’re hysterical! They’ve found the smoking gun!

Twitter’s criteria for determining which accounts were “Russia-linked” should raise some alarm bells. According to a prepared statement by Sean J. Edgett Acting General Counsel, Twitter, Inc., the company considers a user “Russia-linked” if any of the following criteria are met:

(1) the account had a Russian email address, mobile number, credit card, or login IP;
(2) Russia was the declared country on the account; or
(3) Russian language or Cyrillic characters appeared in the account information or name.

This is an incredibly sloppy methodology that relies on major linguistic sleight-of-hand. “Russia-linked” can easily mean that something has some sort of linkage to Russia — its people, culture, language. In that way, a Russian restaurant in New York is “Russia-linked” because it serves Russian food. There is a link. But the way it is being used by those who are obsessed with finding Russian government meddling in the US election is to suggest that “Russia-linked” is “Russian government-linked.” The two things are very different and conflating them is a massive logical fallacy. Would it not sound strange to refer to all American users of Twitter as “America-linked”? Clearly the implication is that “Russia-linked” users are agents of the Kremlin when in fact there is zero evidence to support such an assertion.

How many Twitter users might insert a bit of Cyrillic text into their account information or name who have nothing whatsoever to do with Russia? Who aren’t even Russian citizens or residents? Who may actually despise Russia or its current government? What about American business persons operating in Russia? Might they have a credit card from a Russian bank? A Russian mobile phone number? What about US exchange students? What about European or African or Asian exchange students or business persons?

I have a Russian phone, a mail.ru account, a Russian bank card, my location is Russia & I often use Cyrillic. Thus, I am obviously a bot. https://t.co/6jbcFqSaKm

We are talking about millions of potential “false-positives” if this is the criteria used by social media to determine who is trying to undermine the American electoral system.

Google released the results of its investigation into “Security and Disinformation in the US 2016 Election” and the results were similarly underwhelming. On YouTube, it identified 18 suspicious channels that “appeared to be political” but that “​also ​posted ​non-political videos, ​e.g., ​personal ​travelogues.”

These must have been incredibly influential YouTube channels if they helped sway the election.

But no, according to Google:

So the election was manipulated by 18 YouTube channels of people’s travel videos (presumably in Russia) that didn’t target any particular section of the US population and that no one watched. This is evidence of Sen. Feinstein’s “major foreign power with sophistication and ability”?

Why did not one single Member of the Senate Intelligence Committee ask the witnesses what exactly “Russia-linked” means? How intelligent is that? Why did not one Senator ask why Russia would take out pro-Trump ads targeting pro-Trump voters? Why did no Senator cast a skeptical eye on the real impact of these supposed influence operations, that in fact reached a minuscule fraction of American voters? The answer is that they believe it because they want to believe it. Washington is literally not able to function without an enemy to focus on. The entire US political system is based on threats and enemies.

The military-industrial complex is the lubrication of the wheels of government and without an enemy to generate enormous profits those wheels will seize up. If the Americans understood how they are being played by the elites, being lied to about the “threats” and “enemies” they would rip Washington apart. But if Washington has its way, they will never know. The “solution” to the problem “uncovered” in these hearings is for much more censorship in the social media. Criticism of US foreign policy will be considered subversive and likely serving a foreign power. It will be crushed — or more accurately, “disappeared” with the help of a slight algorithm adjustment. The social media companies declared a willingness to work with Congress to craft new legislation to prevent any “fake news” from getting into their platforms.

(BTW does anyone else notice similarities in style between some of these “Russian” ads and the equally bizarre “Innocents of Muslims” film trailer on which the Obama Administration falsely — and knowingly falsely — blamed the attack on a US CIA facility in Benghazi, Libya?)

Home » Revealed: How The Russians Stole US Elections – OpEd

One thought on “Revealed: How The Russians Stole US Elections – OpEd”