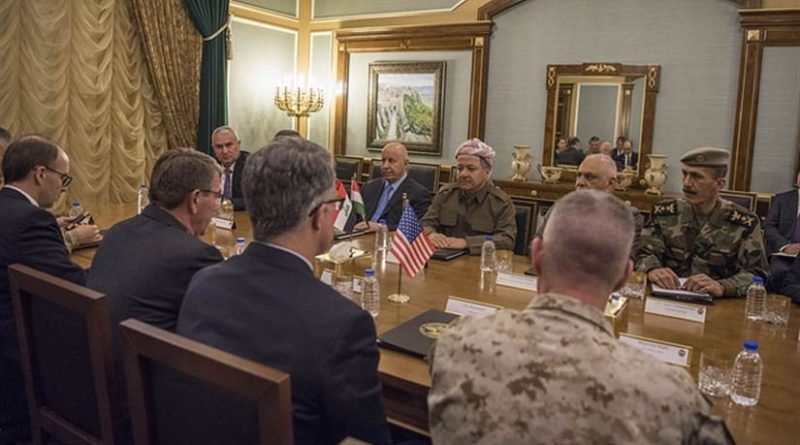 Despite all protests and objections from regional and international actors, a referendum on the independence of the Iraqi Kurdistan Region was finally held through insistence of the region’s officials and with cooperation of Kurdish elites and political parties. While proponents of this referendum, that is, the Kurdish people living in the northern parts of Iraq, considered it as a sign of their quest for independence and an effort to realize their right to self-determination, its opponents in Baghdad and elsewhere outside Iraq equated the referendum with a secessionist effort, which was incompatible with fundaments of the international order and the principle, which says countries’ borders cannot be changed. This difference alone is good evidence to show how challenging has been this development.

This challenge, however, is not simply of a legal nature to be solely analyzed on the basis of the Iraqi constitution or international norms and regulations, so that, a solution could be found for it in this way. In fact, this challenge enjoys interconnected societal, political, security and economic aspects, while at the same time, consisting of intertwined intra-Kurdish, intra-Iraqi, regional, international and global levels. Therefore, this challenge seems to be a very complicated phenomenon. As a result, it cannot be compared with such ephemeral phenomena as the emergence of Daesh or announcement of the Daesh caliphate. On the opposite, one can expect that new security arrangements in the post-Daesh Middle East and over medium and long terms will be mostly affected by the Kurdish entity even though it is too soon to consider this independence-seeking or secessionist movement as an independent variable in the power equations of the region.

Apart from the unique role played by Iraq’s Kurdistan Regional Government, Kurdish parties and elites, as well as the central government in Baghdad, there is a plethora of other effective factors among which the role played by Iran and Turkey is noteworthy at a regional level, while special attention should be also paid to the actions taken by the United States of America.

The role played by the United States of America in shaping or disturbing security arrangements in the Middle East must be analyzed from the viewpoint of this country’s performance as a transregional power, which can affect all aspects and levels of the Kurdish challenge. At the intra-Kurdish level, the United States has an active consular mission in the city of Erbil, which is in interaction with the majority of the Iraqi Kurdish elites and parties. Therefore, since 1992 up to the present time, Iraqi Kurds have especially counted on the United States as well as its support and positive views in order to promote their strategy for creating power balance with Baghdad and reducing the pressure from regional governments. Of course, Kurds themselves are well aware that their independence seeking drive would be aborted without support from the United States and this is why they have been consistently trying to introduce themselves as the most reliable ally for the United States in the Middle East. At the same time, they do not have a high degree of trust in the United States as a result of past experiences and have somehow lost hope in being able to get support of Washington.

To understand this issue, we must pay attention to the second level of the US activism with regard to the Kurdish issue, which is also related to this country’s large-scale strategy with regard to Iraq. Despite spending a total of about one trillion dollars in Iraq in addition to high human casualties since the occupation of the country in 2003, the United States has been blamed for the chaotic situation in the Arab country. Therefore, officials in the White House do not want to be also blamed for the partition of Iraq as a result of their support for the Kurds’ drive to achieve independence. Therefore, they have consistently opposed the independence of the Iraqi Kurdistan Region and partition of Iraq and have emphasized the need for Kurds to reach a peaceful solution in cooperation with the central government in Baghdad. Of course, a certain level of tension and rivalry between Erbil and Baghdad will make it possible for Washington to play a role as mediator in Iraq and as such, pursue its own strategy. At any rate, it is clear that the United States under the leadership of President Donald Trump is trying to avoid paying a higher price with regard to the crisis in Iraq, as is also the case with other regional crises. This means that the United States will remain opposed to disintegration of Iraq, but it will not take any inhibitory step, which would impose a high cost on Washington, in this regard. At the same time, the United States is facing serious limitations and obstacles in its effort to achieve its desirable goals.

Meanwhile, the goals, strategies, possibilities and limitations faced by the United States with regard to Kurdish developments and the future of Iraq are also related to the third level of the Kurdish issue, which is the regional level at which the United States is considered to be an active and effective actor. Of course, when it comes to the regional level of the Middle East and West Asia, the United States still seems to be lacking a coherent strategy. Therefore, at the present time, it acts on a case by case basis and in some cases, including in the case of the rising influence of Iran especially in Iraq and Syria, US support for the security of Israel and its other allies as well as the fight against Daesh are more prominent.

According to these priorities, it seems unlikely that at least in medium term, the Kurdish variable will gain more prominence and serious support is offered for the independence of the Iraqi Kurds in a way that it will have an impact on regional security arrangements. Therefore, Kurds are considered a dependent variable for the United States, which can be used as a tool by Washington in proportion to the effect that it can have on other US interests in the region.

Along the same lines, one can expect the current US policy, that is, voicing opposition while avoiding any preventive measure against the rise of the Iraqi Kurds, to continue at international and global levels without having a cost for this country. However, if the United States wants to remain the leader of the free world, it cannot and should not oppose the fundamental principles of international system – including the principle that countries’ borders cannot change and the principle of national sovereignty of countries – and accelerate the domino-like disintegration of regional countries without being able to control and contain it.