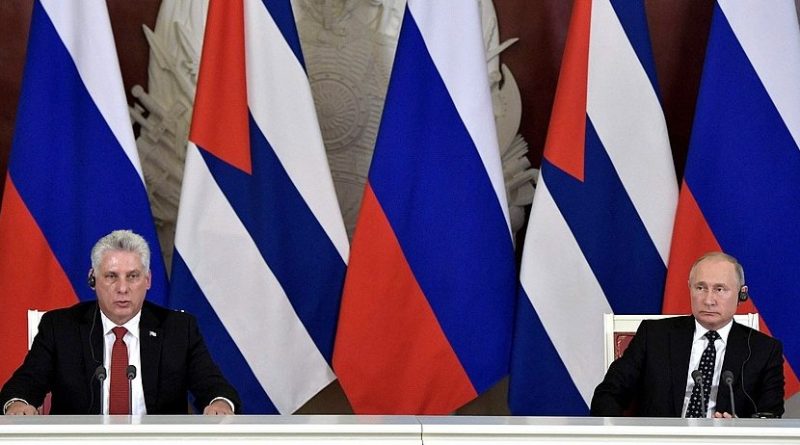 (RFE/RL) — The presidents of Russia and Cuba have vowed to strengthen political, economic, and military ties and denounced what they called U.S. “interference in the domestic affairs of sovereign nations.”

The visit comes at a time of heightened tensions for both nations with the United States.

U.S. officials continue to assail Havana for its alleged human rights violations, while Moscow and Washington have several contentious issues between them — including accusations, denied by Moscow, of Russian interference in U.S. elections, Moscow’s aggressive actions in Ukraine, and its support for Syrian President Bashar al-Assad.

Diaz-Canel invited Putin to visit Cuba in 2019. He has twice traveled there, in 2000 and 2014, as part of efforts to revive relations with the communist island nation.

In a news conference, Diaz-Canel said that “we are going to develop trade and economic ties” and raise them to a high level, citing joint projects in energy, transportation, metals, and biotechnology.

Russian Deputy Finance Minister Sergei Storchak told reporters that Moscow was close to agreeing to a 38 million euro loan for Cuba to help it buy Russian-made arms. He said the accord could be finalized within two weeks.

During the Cold War, Moscow provided billions of dollars in aid and subsidies to bolster the government of Fidel Castro, a fierce rival of the United States.

But support was slashed after the collapse of the Soviet Union in 1991, when Russia was no longer able to provide financial assistance.