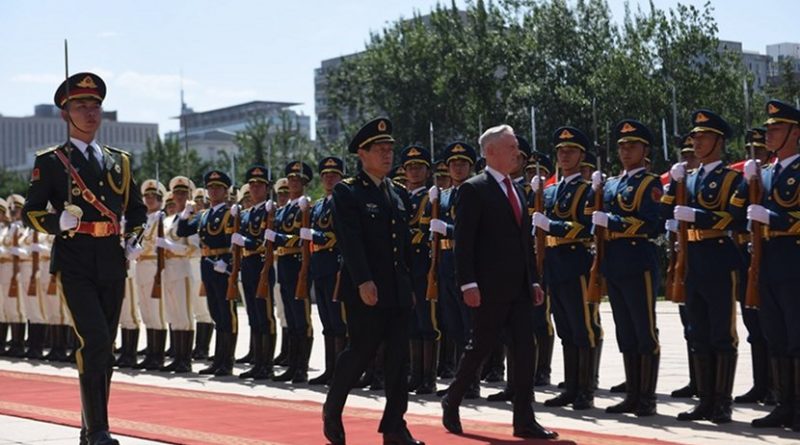 Chinese Defense Minister Wei Fenghe is coming to Washington this week to meet with US Defense Secretary James Mattis. What are they likely to discuss—or more to the point what does Wei want?

Let’s look at the recent context. One meeting between the two in Beijing was postponed by rising tensions between their militaries, particularly in the South China Sea. https://thediplomat.com/2018/10/china-us-relations-whats-next/  The two have since met twice but no agreements have been announced and obviously Wei has more on his mind. Mattis continues to reassure the public by saying our “strategic competition does not imply hostility”. https://www.stripes.com/news/pacific/mattis-china-s-defense-chief-to-visit-washington-next-week-1.553857 But he may be whistling by the graveyard.  He also added that __”we will not surrender freedom of navigation”. This was a signal that the U.S. will not back off in its confrontational approach to China’s claims in the South China Sea.

Even on the heels of a near collision between their warships there, the US Navy is considering a several day major show of force in the Taiwan Strait and against China’s claims and actions in the South China Sea. https://www.scmp.com/news/china/military/article/2166910/us-navy-plans-major-show-strength-south-china-sea-warning

This proposed show of force appears to be an implementation of a more aggressive US policy and actions toward China in the South China Sea. The first indication that a new policy was coming surfaced on 3 May when the White House announced that there would be “near- term and long- term consequences” for China’s “militarization” there. https://www.reuters.com/article/us-southchinasea-china-missiles-usa/us-says-will-be-consequences-for-chinas-south-china-sea-militarization-idUSKBN1I42FY .

The Pentagon then rescinded its invitation to China to participate in the 2018 Rim of the Pacific Exercise because “China’s behavior [in the South China Sea] is inconsistent with the principles and purposes of the RIMPAC exercise”. https://news.usni.org/2018/05/23/china-disinvited-participating-2018-rimpac-exercise

Then in June at the Shangri-La Dialogue in Singapore, US Defense Secretary James Mattis warned China that the rescinding of the invitation was a “relatively small consequence and that there are much larger consequences in the future _ _ .”   https://www.defense.gov/News/Transcripts/Transcript-View/Article/1538599/remarks-by-secretary-mattis-at-plenary-session-of-the-2018-shangri-la-dialogue/  On 4 October US Vice President Michael Pence gave a cold war like, ‘it’s us or them’ speech https://www.whitehouse.gov/briefings-statements/remarks-vice-president-pence-administrations-policy-toward-china/ criticizing China across the board and highlighting the recent ‘unsafe’ challenge by a  Chinese destroyer to the USS Decatur as it was undertaking a Freedom of Navigation Operation (FONOP) against China’s claims in the South China Sea.  More threatening, the U.S. has stepped up its nuclear capable B52 over flights of the East and South China Seas. https://www.news.com.au/technology/innovation/military/b52s-fly-over-south-and-east-china-seas-as-trump-upsanti-with-beijing/news-story/d5c4a35b1259abbb57c89f0e94c6f046

China has responded in kind to what it sees as this growing US threat.  For example, its Air Force spokesperson said that the landing of nuclear capable bombers at Woody Island in the Paracels was training to improve its ability to ” reach all territory, conduct strikes at any time and strike in all directions as well as preparation for _ _ the battle for the South China Sea”. http://nationalinterest.org/blog/the-buzz/showdown-the-south-china-sea-why-china-or-america-wont-26014 .  It also undertook major naval and air exercises in the South China Sea and around Taiwan, including a live fire exercise in the East China Sea that some saw as a warning to Taiwan, Japan, and the U.S. http://focustaiwan.tw/news/aipl/201807190020.aspx   China’s physical challenge to the Decatur may have been the result of a Chinese policy decision to increase the risk and potential cost of such encounters. https://www.scmp.com/news/china/military/article/2167034/beijings-challenge-us-warship-south-china-sea-deliberate-and

More relevant to US-China military relations, it cancelled a scheduled meeting in the U.S. between its head of navy and the US Chief of Naval Operations and postponed the planned military dialogue between Mattis and Wei. https://www.nytimes.com/2018/09/30/world/asia/china-us-security-mattis.html China also refused permission for a US Navy warship port call in Hong Kong  and undertook live-fire drills in the South China Sea with fighter jets and bombers. https://www.japantimes.co.jp/news/2018/09/29/asia-pacific/chinese-warplanes-hold-live-fire-drills-south-china-sea-days-u-s-bomber-flights/#.W7LKdntKj3g

Military to military relations are perhaps the most significant dimension of overall US-China relations because they can be a stabilizing force when relations in other spheres break down. As Randall Schriver, a top Pentagon Official for Asia says such “high level talks are especially valuable during times of tension. https://www.apnews.com/b4ea0f2a812243f390a56e98a4fcffc0/gallery/media:5168a697346a4ccaa1a7c1a6fcd1f58f  In June President Xi Jinping called the US-China military relationship the “model component of our overall bilateral relations”. Given the current poor and worsening political and diplomatic relations between the two, the upcoming meeting could be critical in setting the tone for the near future.

So what does Wei want? He will probably seek answers to some critical questions.  First and foremost, he will want to discern whether Mattis is leaving the administration.  Much of the world respects Mattis as a level-headed, wise and steadying influence on more radical and unpredictable elements in the administration. If Mattis’ departure is imminent, he will want to try and understand if he is being forced out because of such differences, and who and what is likely to come afterwards.

Also he will want to determine how firm and widespread in the upper echelons of the government is support for a more confrontational and even belligerent policy towards China—and how that is likely to play out politically and militarily.

Perhaps most important, he will want to assess the US attitude toward their on again-off again military to military relations.  Does the U.S. want them to continue as such—or to suspend them all together?

Finally he will want to reaffirm how the two militaries can communicate when and if things go really sour.

Acknowledgement by the two military leaders that the two countries may be on the verge of a “cold war” could actually be positive in terms of avoiding unintended and unnecessary conflicts.  This could address the increasingly tense situation in the South China Sea where the US insists on its Freedom of Navigation Operations and intelligence, surveillance and reconnaissance probes which China finds provocative and may increasingly confront. When the militaries of the U.S. and the Soviet Union found themselves in such a situation, they agreed on a code of conduct regarding encounters between their warships and aircraft at sea. It is called an “Incidents at Sea” agreement and was successful in avoiding incidents and if they did occur, preventing their escalation. It is basically an agreement on communication and maneuvering protocols in such encounters. Although such an agreement will not prevent purposeful confrontations and perhaps the two will discuss each other’s intentions regarding such and how to mitigate them.

The international community hopes the meeting will lead to some tension -lowering agreements or at least public statements from both. But it may well be disappointed. Instead, this meeting of military leaders will try to establish the ground rules for what may prove to be a very difficult and dangerous period for US-China relations especially between their militaries.