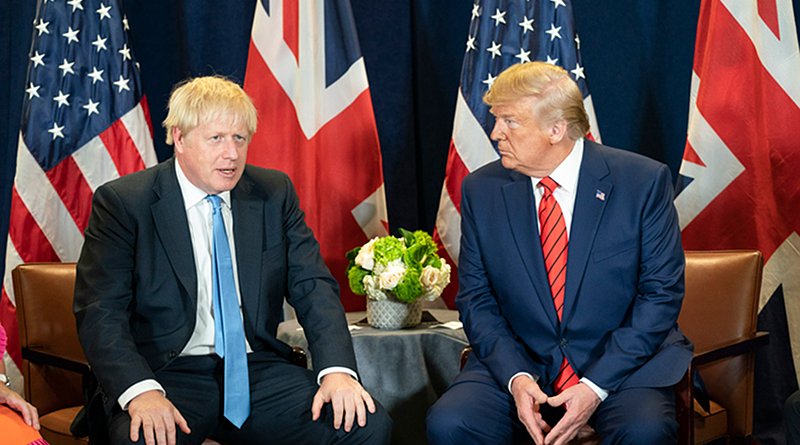 (EurActiv) — Having set great store in its ‘special relationship’ with the United States, the UK will be watching the US presidential polls with great interest, and none more so than Prime Minister Boris Johnson and his government.

In line with convention, UK ministers won’t be drawn publicly on whether they support Donald Trump or his Democrat rival Joe Biden, who holds an eight-point lead in national polls and significant leads in most key swing states on the eve of polling day.

“We’re exceptionally well placed, given our values, given what we do in practice — from security and intelligence through to climate change and trade — to make sure that whoever is in the White House that the relationship between Britain and the US will thrive,” the UK’s top diplomat said last week.

However, the prospect of a second term for Trump has obvious appeal to Johnson.

A number of former UK diplomats, including Ivan Rogers, the country’s ambassador to the EU between 2013 and 2017, have suggested that Johnson, who has friendly personal relations with Trump, is more likely to push ahead with a ‘no deal’ scenario with the EU if Trump is re-elected.

Sir Peter Westmacott, a former British ambassador to Washington, has warned that Brexit will mean that a Biden presidency leans more towards Paris and Berlin.

“We will be on our own, somewhere offshore [from] the European Union and somewhere in the mid-Atlantic and creating something called ‘Global Britain’,” he told the Institute for Government on Monday (2 November).

While Trump has been one of the most vocal international supporters of Brexit ever since the referendum campaign, repeatedly promising an ambitious US-UK trade deal with London, Biden and other Democrat leaders have been critical of the Johnson government’s threat to breach the terms of its Withdrawal Agreement with the EU. They have warned Johnson that the UK must honour the Good Friday Agreement or there will be no trade deal with the US.

“Had I been a British citizen, I would have voted against leaving,” was Biden’s take on the 2016 Brexit referendum when questioned on the matter at the Chatham House think-tank in 2018.

He has also described Johnson as “a physical and emotional clone” of Trump.

A survey of party members by the ConservativeHome website suggests that a majority of Conservative activists support a second term for Trump, though those numbers are not reflected among the wider UK public.

A survey by Hanbury Strategy suggests that 76% of Britons would vote for Biden compared to just 24% for Trump.

Although Johnson and Trump boast similar hairstyles and revel in their ‘outsider’ status, the similarities on policy between the two should not be overplayed. Privately, many of Johnson’s ministers are repelled by Trump’s nativism and are mindful that his protectionist ‘America First’ approach to trade is unlikely to mean that the UK receives the favoured treatment it wants.

The UK politician most in tune with Trump is chief Brexit campaigner Nigel Farage, who laments that the US president has been “portrayed as a monster by the UK press”.

The Johnson government has made a US trade pact one of its priorities and US and UK officials completed their fifth round of trade talks last week. Officials are hoping to wrap up a deal before the mandate of the US government’s Trade Promotion Authority expires in July 2021.

“We made great progress + are in a good position to move forward after the US election,” International Trade Secretary Liz Truss tweeted on Monday.

However, it is likely to be more symbolic than offer a significant economic boost. The US wants to increase the UK export opportunities for its agricultural industry but ministers, under pressure from the UK farming lobby, insist that the UK will not accept US food standards.

Meanwhile, the US wants the UK to scrap its digital services tax and increased access of its pharmaceutical and healthcare industry to the UK’s National Health Service, another red-line for London.

On environmental policy, meanwhile, the UK will chair the next, delayed, COP26 international climate change conference in 2021. The dossier is a policy area where the Johnson government is far more in line with Biden’s Green New Deal.

“The reality is, I think is that environmentalism offers the UK a way back towards a closer relationship with the Biden White House and I think, if we’re sensible, we will see the UK offering the Biden White House a very generous share of the COP26 talks in order to bring them in,” says Tom Tugendhat, a Conservative MP and chair of the UK Parliament’s influential Foreign Affairs committee.

A Biden White House would also mean re-building relations with the likes of NATO, the United Nations and the World Health Organisation, all institutions that the UK values.