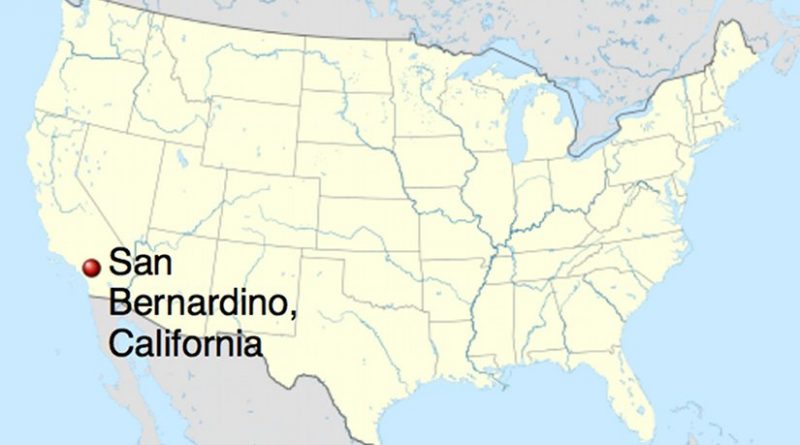 At least 14 people were killed and 17 others wounded on Wednesday when three people burst into a handicapped training center in San Bernardino, California and started shooting.

Hours later, police shot and killed two of the suspects in a neighborhood nearby Redlands, California when officers spotted an SUV in which the gunmen escaped. One officer was wounded and is expected to survive.

San Bernardino Police Chief Jarrod Burguan say the two dead suspects are a man and a woman dressed in assault-style clothing and armed with assault rifles and handguns. There is no information on who they are or their relationship to each other.

The third suspect was arrested while trying to run away from the shootout at the SUV. Burguan says it is unclear if he was one of the wanted gunmen or just someone who was trying to scramble to safety.

Chief Burguan described the shootings as a case of “domestic terrorism,” but said he does not know what the motive might have been. He said the possibility of a workplace dispute is being looked at. Burguan did not say if the dead and wounded worked at the handicapped center or were clients

An FBI official on the scene said he is unwilling to say at this time if the attack had anything to do with international terrorism. He said the investigation has uncovered what he described as potential leads that could point in that direction, but said authorities will go where the evidence takes them.

The facility where the shooting took place, the Inland Regional Center, was founded more than 40 years ago to help people with developmental disabilities.

In comments to CBS television, President Barack Obama said the U.S. has a pattern of mass shootings that has no parallel anywhere else in the world.

He said there are steps that can be taken to make Americans safer, adding that officials in every level of government should come together on a bipartisan basis to make such shootings rare instead of normal.

The two leading U.S. presidential candidates reacted by Twitter. Democrat Hillary Clinton said she refuses “to accept this as normal. We must take action to stop gun violence now.”

With details still coming in, Republican Donald Trump said the shooting “looks very bad.” He wished good luck to officers on the scene and said this is when police are “so appreciated.”