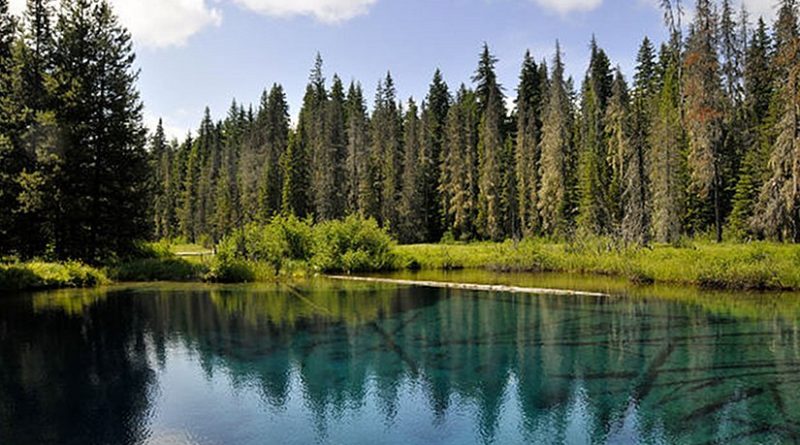 Rising temperatures and late summer dryness are teaming up to push some types of forests beyond their ability to cope with stress, according to a new analysis of forest response to climate change across the Pacific Northwest.

Particularly vulnerable forests include those in drier areas such as the east side of the Cascade Range, the Blue Mountains and the Rocky Mountains of northeast Washington. High-elevation forests in these areas are poorly adapted to increasingly hot, dry conditions. Sensitive species include lodgepole pine, subalpine fir, spruce and mountain hemlock.

Over the last decade, increasing stress has peaked in August and September as greater water deficits and rising temperatures combined to affect forests across the region. This has created conditions potentially lethal to trees in some highly vulnerable areas, according to a report published this week in the journal Remote Sensing of Environment.

In those two months, the region’s extensive Douglas-fir forests saw an increase in the area subject to stressful conditions, from about 1 percent in August to almost 8 percent in September, said David Mildrexler, a doctoral student in the Oregon State University College of Forestry, and lead author of the report. Areas of high Douglas-fir vulnerability were largely concentrated in the southern portion of the Oregon Coast Range and western Cascade Range.

In ponderosa pine forests, the area of vulnerability rose from 5 percent in August to 33 percent in September. These forests are more adapted to drought but could be affected if prolonged stress continues.

Instead of focusing on air temperatures — the numbers commonly heard in daily weather reports — the analysis uses the actual temperature of surfaces, such as leaves and soil. Trees cool themselves by pumping water from the ground through their leaves, much as humans reduce heat stress by sweating on a hot summer day.

When moisture is lacking, that natural air conditioning shuts down.

“As soon as that stops, the canopy starts to heat up,” Mildrexler said. “When there is no water available to cool the leaves, at about 104 degrees Fahrenheit photosynthesis starts to decline in many plant species. At about 122 degrees, we start seeing effects that are lethal, even with fairly short time exposure. Higher temperature droughts really start to stress trees fast. And it’s projected to get much worse in the future, pushing more forests to the edge.

“You don’t see many places on Earth where forests get that hot,” he said. “It’s why forests are so important for cooling the Earth. With their deep roots that can access groundwater, forests help regulate high temperatures in the summer. The increasing dieback of forests globally is very concerning for this reason.”

In their analysis, Mildrexler and his colleagues tracked the month-to-month difference between water availability and surface temperature starting in 2003, using data from the Terra and Aqua satellites launched by NASA. These two satellites generate images of the entire Earth’s surface every day.

The scientists created a mathematical model — what they call the forest vulnerability index — that captures the relationship between water and temperature trends from one month to the next. In the Pacific Northwest, late-summer stress shows up clearly across the region.

In areas where seasonal dryness occurs regularly, forests have evolved mechanisms to cope with these conditions. Drought in the West isn’t that unusual, but the combination with higher surface temperatures makes this trend a concern, said Mildrexler.

By providing a way to monitor forest stress, the research will help managers in government agencies and private companies focus their efforts on vulnerable areas. Among the options that forest managers can pursue are removal of less drought-tolerant species such as grand fir from drier forests, and prescribed burning to improve fire- and drought-adapted stands.

“This monitoring method allows managers to better prioritize their activities,” Mildrexler said. “Right now, it isn’t always so clear, but we’re showing where on the landscape vulnerability is increasing and how it varies in each forest type. There is a lot of forest land out there, and the Forest Service has limited budgets for treatments across the landscape, so there’s a real need to get the maximum benefit for what they are doing.”