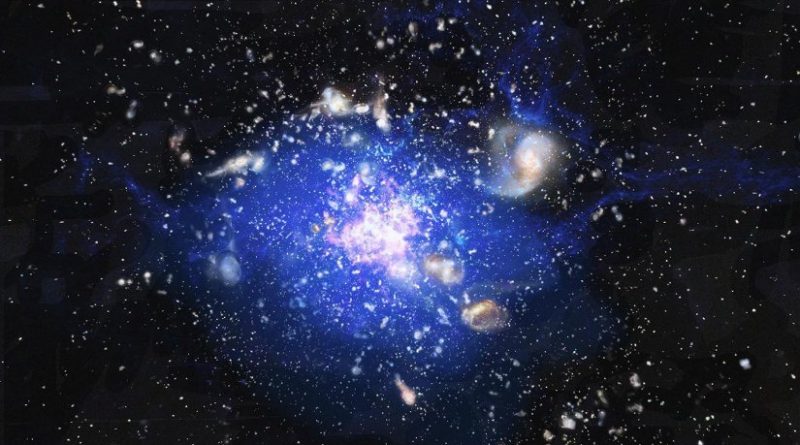 Artist's impression of a cosmic "ocean" of cold gas, discovered at heart of an embryonic cluster of galaxies, some 10 billion light years away. The central region has been given the name "Spiderweb" though it was previously known as MRC 1138-262, because it seems to consist of tiny galaxies trapped by gravity, rather like flies in a spider's web. The cold gas, the matter from which new stars form, is spread across a quarter of a million light years, and it is expected that this cloud of cosmic gas will condense into a single "supergalaxy." Credit: ESO/ M. Kornmesser.

An international team of scientists, with IAC participation, has discovered that the biggest galaxies in the universe develop in cosmic clouds of cold gas. This finding, which was made possible using radio telescopes in Australian and the USA, is published in the journal Science.

Galaxies are usually grouped into clusters, huge systems comprising up to thousands of millions of these objects, in whose interior are found the most massive galaxies in the universe. Until now scientists believed that these “supergalaxies” formed from smaller galaxies that grow closer and closer together until they merge, due to gravitational attraction.

“In the local universe we see galaxies merging” said Bjorn Emonts, the first author of the article and a researcher at the Centro de Astrobiología (CSIC-INTA) in Madrid “and we expected to observe that the formation of supergalaxies took place in the same way, in the early (now distant) universe.”

To investigate this, telescopes were pointed towards an embryonic galaxy cluster 10 thousand million light years away, in whose interior the giant Spiderweb galaxy is forming, and discovered a cloud of very cold gas where the galaxies were merging. This enormous cloud, with some 100 thousand million times the mass of the Sun, is mainly composed of molecular hydrogen, the basic material from which the stars and the galaxies are formed. Previous studies had discovered the mysterious appearance of thousands of millions of young stars throughout the Spiderweb, and for this reason it is now thought that this supergalaxy condensed directly from the cold gas cloud.

Instead of observing the hydrogen directly, they did so using carbon monoxide, a tracer gas which is much easier to detect.

“It is surprising,” said Matthew Lehnert, second author of the article and researcher at the Astrophysics Institute of Paris, “how cold this gas is, at some 200 degrees below zero Celsius. We would have expected a lot of collapsing galaxies, which would have heated the gas, and for that reason we thought that the carbon monoxide would be much more difficult to detect.”

However, combining the interferometers VLA (Very Large Array) in New Mexico (USA) and the ATCA (Australia Telescope Compact Array) in Australia, they could observe and found that the major fraction of the carbon monoxide was not inthe small galaxies.

“With the VLA”, explained Helmut Dannerbauer, another of the authors of the article and researcher at the IAC who contributed to the detectoin of the molecular gas, “we can see only the gas in the central galaxy, which is one third of all the carbon monoxide detecte with the ATCA. This latter instrument, which is more sensitive for observing large structures, revealed an area of size 70 kiloparsecs (some 200,000 light years) with carbon monoxide distributed around the big galaxy, in the volumen populated by its smaller neighbours. Thanks to the two interferometers, we discovered the cloud of cosmic gas entangled among them”.

Ray Norris, another of the authors of the study and researcher at the CSIRO and Western Sydney University underlined that, “this finding shows just what we can manage to do from the ground with international collaboration.”

According to George Miley, a coauthor of the article, and whose group at the University of Leiden (the Netherlands) discovered and studied this embryonic cluster with the Hubble Space Telescope at the end of the 90’s: “Spiderweb is an astonishing laboratory, which lets us witness the birth of supergalaxies in the interiors of clusters, which are the “cosmic cities” of the Universe” And he concludes: “We are beginning to understand how these giant objects formed from the ocean of gas which surrounds them.”

Now it remains to understand the origin of the carbon monoxide.

“It is a byproduct of stellar interiors, but we are not sure where it came from, or how it accumulated in the centre of this cluster of galaxies. To know this we will have to look even further back into the history of the universe,” said Emonts.

Home » Where Giant Galaxies Are Born